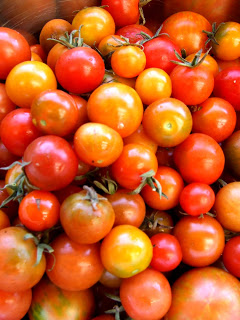 It was mid August 2007, the weekend before my painful bonus, that I thought it was time I prepared to sow our summer crop. As this was the first time I had grown summer vegetables it was fairly experimental. I had joined the “Diggers Club” in early July, mainly for their heirloom seed catalogue, so Kim and I thought it would be inspirational to visit one of their two garden centres on Saturday. The Diggers Club have a garden called Heronswood at Dromana, and St Erth at Blackwood, both in Victoria. As Blackwood was the closer to us, Ben, Kim and I jumped into the Hybrid and headed off for the one hour trip. It was very scenic as Blackwood is in the middle of a state forest.

Upon arrival we had a quick look at the garden store, but as we were very hungry we headed straight to the Cafe for lunch. The hostess told us that most of the food was sourced from the surrounding garden. Very impressive, I thought. Something to aim for at home. Both Kim and I had a Spinach & Pine nut flan with a chunky side salad, and Ben had a toasted cheese sandwich. He has been addicted to them ever since! At the end of the meal our plates were clean and our tummys full.

After lunch we went on a stroll around the gardens. The vegetable plot was huge, however a lot of plants were coming to the end of the winter season, so it looked a little weathered. The herb garden was expansive and the native garden was laced with ornamentals that all seamed to go well together.

We proceeded back to the garden store and bought some seedling trays, about 10 packets of heirloom seeds, and some garden gloves. We also bought 2 dozen bare rooted strawberry plants in 3 varieties. The strawberries looked very spindly but the nurseryman said that they would have no problem growing if planted as soon as we got home. We left for home and the journey was uneventful but nice.

When at home, I mixed in a bag of cow manure into the fifth garden bed that Adam had helped to build the weekend beforehand. It was made in the same method as the first four beds, except that I read somewhere that strawberries needed to be well fed. I planted them in 3 rows, about 20 cm apart and kept them well watered. 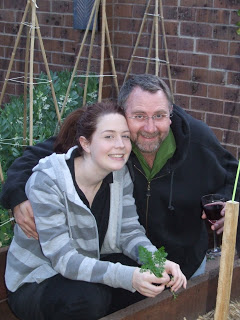 I grew most of the plants as seedlings first over July/August in my little greenhouse. This ensured the survival of the seedlings from pests in the first few weeks. The plantings were held over three weekends, and the girls helped me plant on the last two days because of my newly acquired injury. Amy and Megan really got into the spirit of things and were both a great help. If it wasn’t for them there would not have been a summer crop this year!

The main failures we had were the rockmelon, as I could not keep the slugs and snails off of the seedlings, even in the greenhouse. The little beasties made a bee-line for those particular seedlings all the time. I will have to use a beer trap next year as we all love rockmelons. Also the zucchini and pumpkins were planted out in big pots as I didn’t have any room to let them run all over the garden. They required so much water that they dried out every day. Those vegetables did not grow very big, but we ate them anyway. I was surprised how much flavour the pumpkins had, even though they were about the size of my hand! Delicious. I used the zucchinis in our weekly stir-fry and the largest grew to about the size of my index finger.

All of the other vegetables were a huge success. I planted just enough tomatoes to be self sufficient (we are still eating them in March), the corn grew to to 2 metres in hight, and we had masses of cucumber. Even though they were huge, and we couldn’t eat them fast enough, they still tasted crisp and juicy. Unfortunately, I left the sweet corn on the plant too long. The ears had dried out and were now only good for seed. Luckily enough, I had picked two ears for Ben two weeks earlier and he scoffed them both down. He had never helped pick his own corn before nor eaten it raw! Kim was unaware that you could eat corn on the cob raw. I told her that to eat it raw and to get the best flavour when cooked, you must consume or cook it within about 20 minutes of harvesting, or otherwise the sugar in the corn turns to starch. She tasted some and agreed with Ben that it was fantastic. I will have to take better care of the corn next year.

We have eaten one of the six watermelons that grew and it was the sweetest melon I have ever tasted. I planted a variety called Sugar Baby which weighed 3 kg and was about 20 cm in diameter. There are still five more on the vine growing a little larger. The lettuce mix was a hit and we used it every day for the first few months. It just kept growing and growing. Lettuce is one of those vegetables that you have to water just about every day or they turn bitter and bolt to seed if deprived. Thank goodness for the rainwater tank which we installed in winter. I used the harvested water often and at one stage it got as low as quarter full, until Kim came up with her brilliant water-saving idea.

As Summer has now ended, the tomatoes are coming to an end, the silverbeet is on its last legs and the cucumber vines were pulled up and composted last week. I have been planning for the next crop rotation but have yet to plant out. I will give the soil another two weeks to recover slightly before I plant again. Oh, I almost forgot. All but four of the strawberries died or didn’t take off. Of the four that did survive, they bore about three berries each. Maybe I will have better luck next year!