The main part of this episode is an interview that I gave when I appeared on Reaction Podcast as a guest of Matt and Beau. We talk about all things sustainable living, including a bit of analysis about this podcast.

Listen to the Episode Below (0:46:33)
Download Listen in a New Window iTunes Stitcher SoundCloud Leave a Review Clammr It Subscribe via RSS Subscribe on Android RSS Patreon

It is full of fun and laughs and the odd swear word.  What can I say, I was excited so my accent and banter was heavier than usual.

The Reaction Podcast is all about other podcasts where Matt and Beau (I believe they are brothers) review other podcasts.  You can find all their shows at reactionpodcast.com.  Previous episodes that I have listened to have been a laugh-riot, and their style of humor is infectious.  Thanks for having me on the show fellas!

After the interview, I answer lots of listener questions that have been sent in via voicemail over the last month and a half.  From growing sweet corn, to where to get african horned melon seeds and everything in between!

During the show I mention the following links

If you enjoyed the show, please visit iTunes and rate the show and leave an honest review. You can also do the same within Stitcher Radio if you use that service.  It would help me out so much, and elevate the ratings so that others can find out about the podcast and learn about sustainable living in the ‘burbs.

Saturday was a great day for a morning trip, and both Kim and I had been looking forward to getting out of the house all week. I was in the mind that I didn’t really care how long it took to get there and how many stops we needed to make, we were going to make it with minimal fuss and pain.

The trip was a lot shorter than we thought, and was only about 30 km from home. Blackwood, where the St Erth Garden is situated, is in the centre of the Wombat State Forest, and is in a very beautiful part of the country. The forest had been burnt out about 5-6 years ago, but even though the tree trunks were black, most had grown back, but what amazed us the most was that there was not many ferns or undergrowth that had grown back. Maybe that is a good thing?

Anyway, when we arrived, we pulled up next to an elderly couple who asked us if we were going on the hike. We looked at each other, and I replied that we were just going to have a look at the garden. Apparently, there was a group hike organised for the John Chan track into the forest. I don’t think that Kim, Ben and I would have made it to the first kilometre, let alone the entire hike. We all walked away from the car park and this is the first thing we saw (other than the hikers). 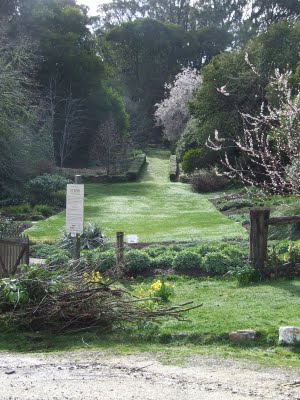 Absolutely beautiful. All that waste to the bottom left was picked up about 10 minutes later by one of the gardeners. As we proceeded to the entrance, we passed some plant tables that Kim whisked me past. 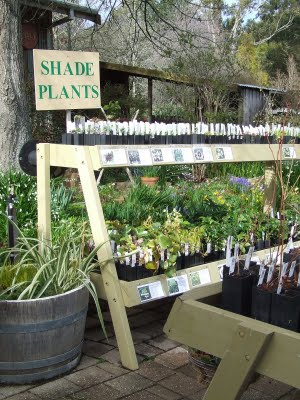 There were about 5 rows of seedling tables from ornamental, natives, to fruit and vegetables. I could have spent just an hour looking at all that stuff before we even went into the garden!
We entered via the little miners cottage that serves as the store and main entrance to the rest of the garden. The staff were friendly and I showed my Diggers members card and coughed up the $10 for Kim. Ben got in for free. We received a map to the grounds, and departed via this lovely doorway. 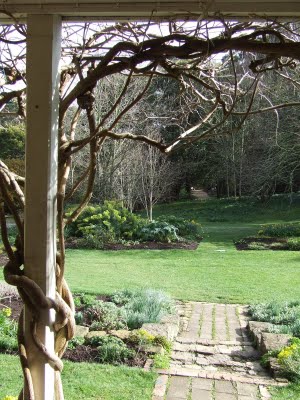 Down the path and around to the right, at the bottom of the steps to the espalier fruit tree garden we spied this sundial. 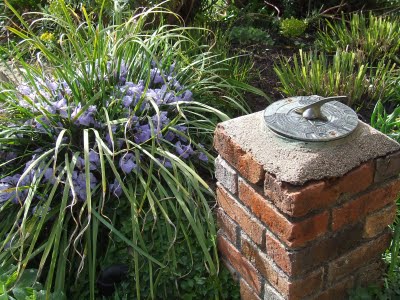 It was about half an hour fast, but how can you change it. Ha.
Up more steps and this is what we saw. Fruit trees by the dozen, all espaliered to fit in as many as possible in a small space. 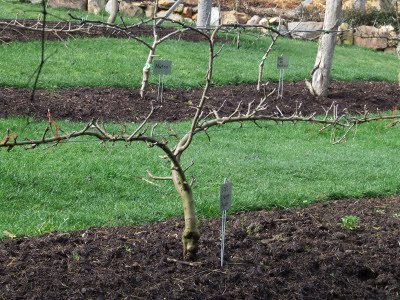 This one is a Cox Orange Pippin. I have one of these in my front yard orchard. Here is a shot of me attempting to suck in my belly in front of a pear tree! 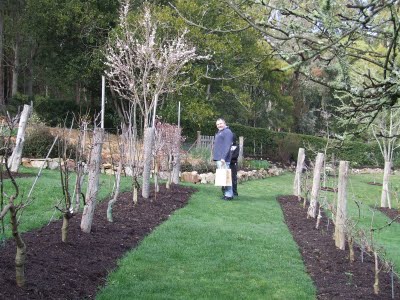 After walking up each row, and trying to avoid all the kangaroo poo, we got to the veggie patches that were all covered with netting. I think the native wildlife might like to have a nibble on their greens, so they have to protect them. But on the way there were moss covered trees. 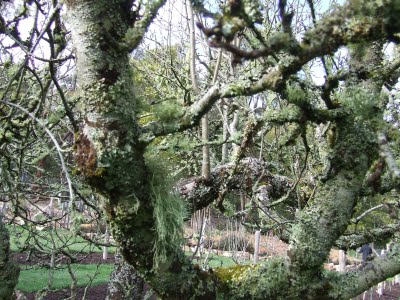 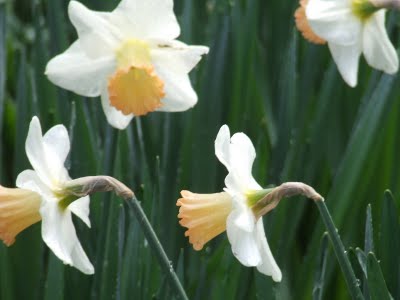 and other flowers that Kim just had to stop and take pictures of. I don’t blame her, they were nice. 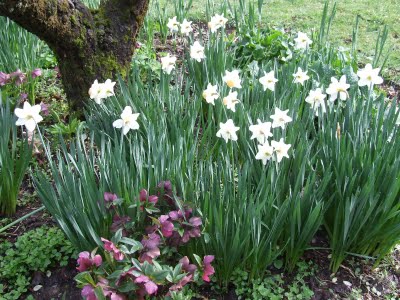 So, back to the veggie patches. Here they are finally. Well composted with a rich home made compost and well mulched beds, and paths ready for the soon to be warmer weather. 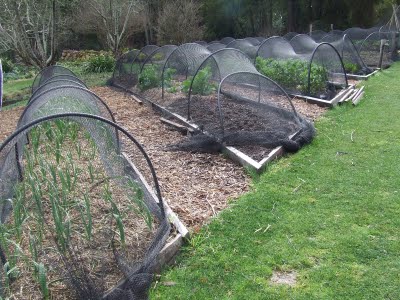 Garlic in the first bed (mine are bigger!), 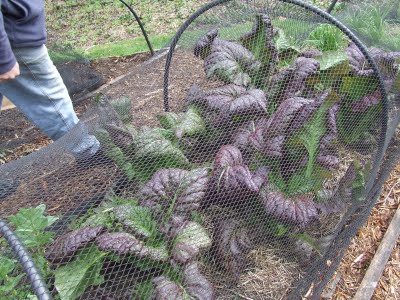 curly kale in the second bed (I think), 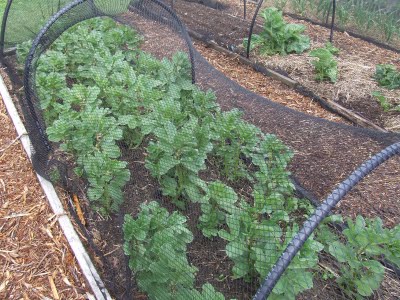 broad beans in the third, both crimson and aquadulce. 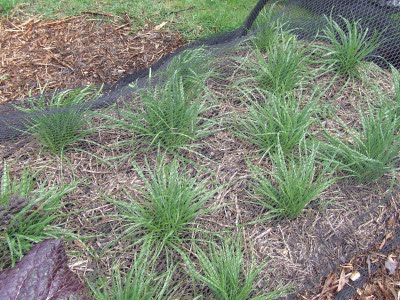 Then a nice patch of garlic chives, which I sampled. Very garlicy! The last row had salad greens, lettuce, mustard greens, mizuna and some rainbow chard. 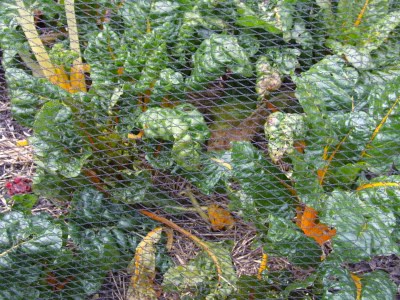 That was the end of the well protected veggie patch. Up the hill now to the berry patch. 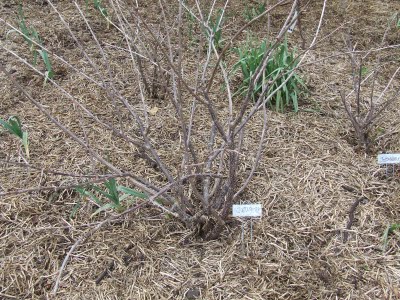 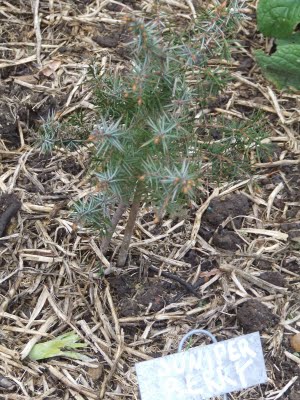 There were many others, but right at the very end was the rhubarb. Kim and I both started to think of apple and rhubarb crumble, and will plant some next chance we get. 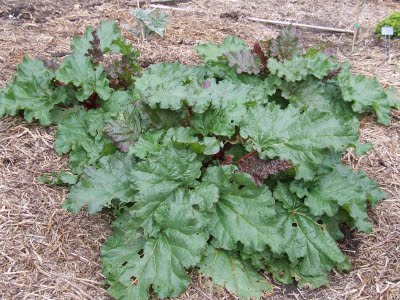 That was basically the end of the edible garden, except for some herbs, but because these photos are taking forever to upload on this slow collection, I will show two more photos, and do a part 2 tomorrow. 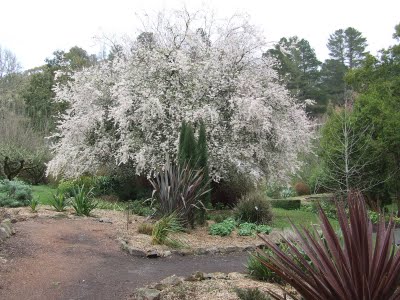 This massive tree dominated the edible section of the garden with its delicate pink blossom. It was captivating. 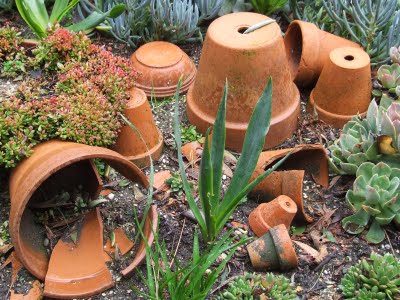 And, alas, we stumbled upon Bill and Ben’s final resting place among the succulents. It looked like a nasty accident. I do hope it was painless.

I will finish off part two tomorrow evening. Thanks to Kim for the wonderful photos. Stay tuned!

Well you have all heard the saying, so what a surprise we got this afternoon when these two flew in. It was a lovely day to spend swimming around the pool in the spring sunshine. 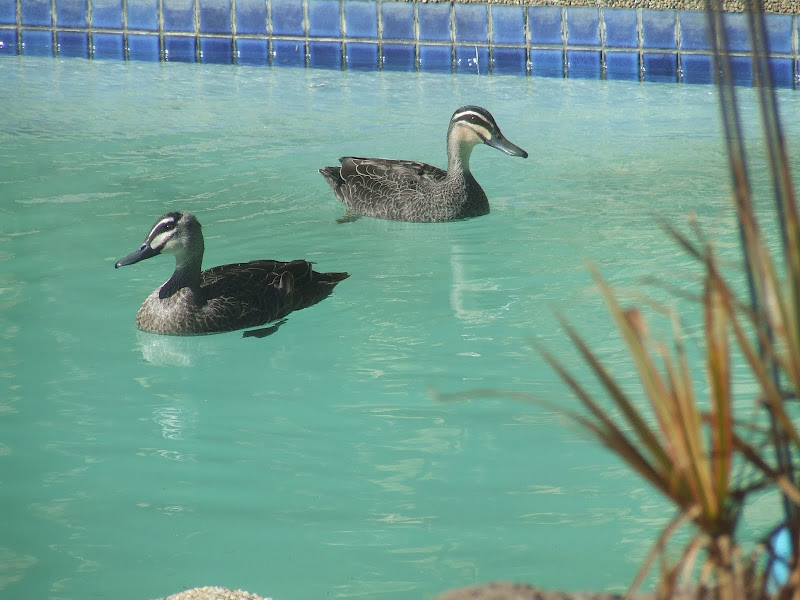 I am not quite sure why they chose our pool, but they hung around for most of the day.

And after the rain, everything was soaked of course. The garden has had such a good drink only because I have raised beds, but as every gardener would say, I wish it would have rained all day. There are still strict water restrictions in Melton and the ground is bone dry. Dig down a couple of centimetres and it is hard as rock, and I don’t see the situation changing during Spring either. Well at least the water tank is full for Summer, and I have plenty of shade cloth now to shade the tomatoes during the very hot weather. No cooked tomatoes for us on the vine this year thank you very much. I would rather do my cooking in the kitchen or on the BBQ! I believe it is called “adapting to Climate Change”, which is something I wish we didn’t have to do, and shouldn’t have to if we all got off our collective bums and did something about it. That means the entire developed and growing developing nations in the world! Get on with it, please. Only a few months to Copenhagen, so do the right thing, please world leaders and leave the bullshit behind.

We are all off to St Erth, in Blackwood tomorrow to buy some veggie seeds and to look at the spring bulb exhibition. We missed it by a month last year and went to early. Hopefully we will catch it just at the right time of the year tomorrow.

I have already planted out lots of seeds for spring and made my own seed raising mix on Wednesday afternoon, but I will write about that tomorrow and about our little trip. It may take some time to get there as I can only sit for about 20 minutes before I get sore and the trip is about and hour each way, but I promised Kim that I would stick it out. We haven’t been out for what seems like ages. Should be good fun.