Four years in a row I have saved broad bean seeds and sown them successfully.  This year it has been a little different.

I use a variety called Aquadulce which is a suitable variety for our cooler winter climate.  The bean stalks grow to about 1.8 metres (6 ft), and then I pinch of the tips so that the pods swell quicker.  I even eat the tips, wilted down in a little butter with garlic.  Delicious.

Not this year however.  Many of my broad bean plants have caught a fungus commonly known as bean rust.  It starts off as a small infection and grows rapidly. 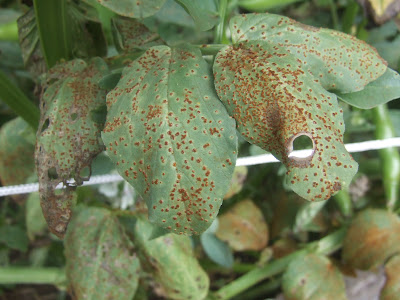 According to the Victorian Department of Primary Industries, the scientific name is Uromyces viciae-fabae, and is not very common in commercial crops.  It certainly is not common in my crop.  It causes leaf drop and may reduce the size of the pods.  It spreads by wind, and multiplies rapidly in warm, wet temperatures above 20°C late in the season. 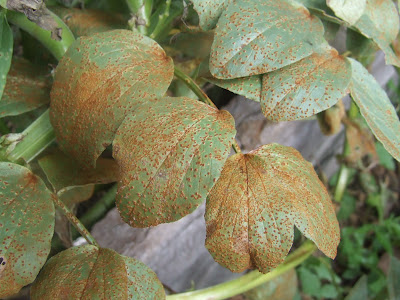 Well wouldn’t you know it, it has been unseasonably hot (31° C) here last week, especially when the long term spring average is 19.7°C.  Again with the abnormal weather, but this is not late in the season.  I didn’t harvest my broad beans until mid November last year.

I only noticed the fungus it on Saturday, so I would say that it blew in from from some farm up north of us.

From watching Gardening Australia, I have learnt that there are a few treatments to prevent a fungal infestation, but they only usually work before your plants get infected or very early stage of infection. 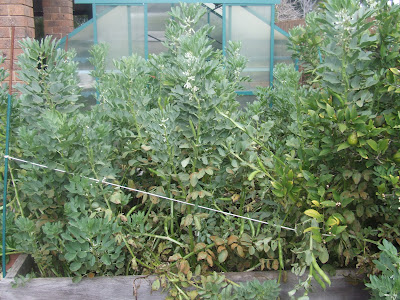 You can spray the fungus with a 1 part milk to 10 parts water mix which also works on powdery mildew on any of the cucurbit family (zucchini, cucumber, pumpkin, squash).

Another organic fungicide is a Bicarbonate of soda based mixture.  2 litres of water (2 quarts), add a few drops of vegetable oil (any type will do), a couple of drops of dishwashing liquid, and four teaspoons of bicarb.  Mix it up well and spray the leaves.  The bicarb soda makes the leaves alkaline which inhibits fungal spore development.

Both these mixes are safe to use, however must be reapplied after heavy rain.  Herein is my problem.  Since I discovered the rust, it has not stopped raining.  So I have decided to harvest the crop this Saturday, and cut my losses.

An additional side effect of the rust is that I will not be able to compost the bean stalks or pods due to the risk of the rust infecting my compost bins and reinfecting broad bean crops again next year.  I also will probably not be able to save the seed from this crop either, so will have to start anew.

Anyway, I still get to harvest a big crop of broad beans, and blanch them for storage.  Hopefully I will still get as many as last year.

Has anyone else had a broad bean rust problem this season?