Planting garlic is also easy that it’s criminal if you don’t give it a go.  So in this post let’s learn how to plant garlic!

In my climate zone, (heat zone 4, cold zone 10), I plant just after the first full moon in May or June.  I find that the soil is still just cool enough so that the garlic shoots quickly and gets a good start.

When I plant garlic, I source the bulbs from a good seed supplier, in my case, the Diggers Club.  This year I bought a variety pack of three types of garlic;  Tassie Purple, Dunganski, and Lokalen.

When preparing the bed for planting, don’t add any fertiliser to the bed if you did so in the summer. You will get more leaves and smaller bulbs. Plant the garlic in a bed that you had a very hungry crop before hand, like Brassica or tomatoes.  But make sure that you add some organic fertilizer as a top-dressing in spring to give them a boost.

Check out the video I made to show you how to plant garlic; https://youtu.be/-Oe3-ABuD6M


Make a hole with your dibber (I use a bit of old sawn off broom handle or my index finger) about 2″ deep (5 cm) and then place each clove in the hold pointy end facing upwards. Plant them about 6″ (15 cm) apart, so that you get good-sized bulbs. The closer they are to each other the smaller the bulbs. 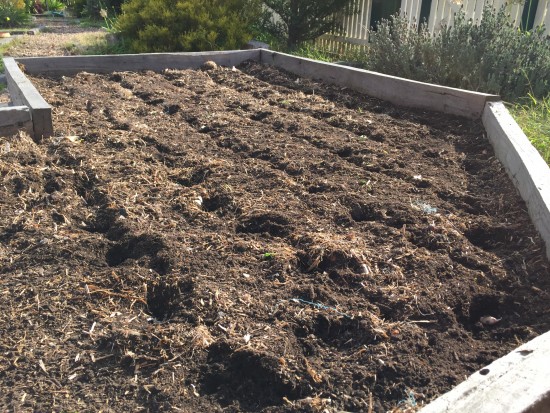 Don’t backfill until all your garlic cloves are in the soil. You will lose sight of where you planted them otherwise!

Backfill the holes and water well. Within about 4-6 days they will send up the first green shoots through the soil. All you need to do is keep the soil moist for the rest of the season, and keep the bed weed free.

Easy peasy!  If you haven’t grown garlic before, why not try it this year.  It’s not too late!

My early spring garden is always a bit of a challenge.  A challenge because there is just not enough space to go around for all the new vegetables that I want to plant because the winter veg is not ready to harvest.

For example Broad Beans, which are one of my favourites will probably not be ready to pick until late October.  So when they are harvested, this will become my Tomato bed because then the soil will be warm enough to plant seedlings into.  The soil is still way too cold this early in spring as it would stunt the growth of the Toms. 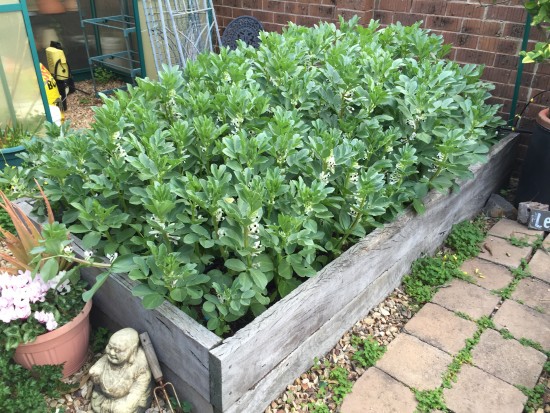 In the next bed we have Leeks.  They are a bit small this year, and haven’t grown as vigorously as I expected.  At this rate I expect they will be ready to harvest in late November, so I have a cunning plan.  In between the rows, I have planted Sweet Corn, which should be up in a week or so.  I planted each seed about 30 cm (1 ft) apart so as not to crowd the leeks too much.  Hopefully it should work out okay. 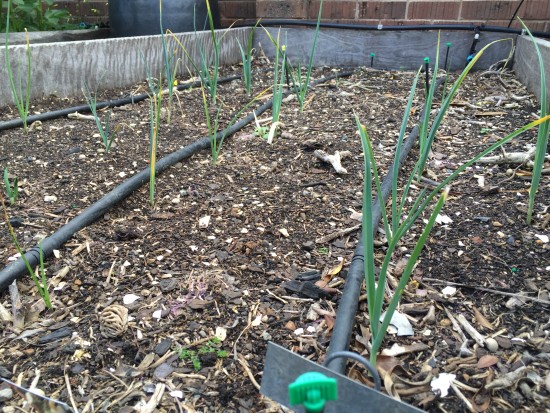 Next we have the Rainbow Chard and Perpetual Spinach.  Not only is this great human food, its great chook food as well.  This crop will last over the summer and will be a good source of leafy iron for the season.  We have already been eating a fair bit of these two beta vulgaris cultivars, but the more you pick, the more it grows.  Both excellent plants that will last up to 18 months of cropping if kept well watered and picked frequently. 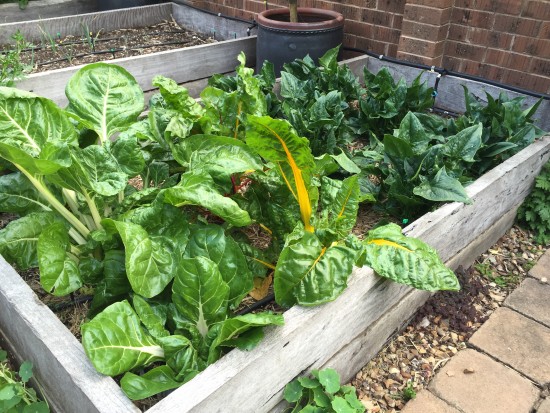 Then we have the Kale.  We have been feasting on Kale Chips for about 3 months now, and it has become our vegetable chip (crisp) of choice.

We also have a few more plants that self seeded from last winter’s crop so we are definitely not without this nutritious and delicious vegetable.  So much easier to grow than other Brassica, and I have found that it is less prone to aphid attack as well during spring.  We will probably harvest the lot and make a big batch of Kale Chips in a couple of weeks, because they are showing signs of going to seed.  I will then vacuum pack a few bags so we can have Kale Chips during the summer!

In this bed will go Spacemaster Cucumbers and more Tomato varieties. 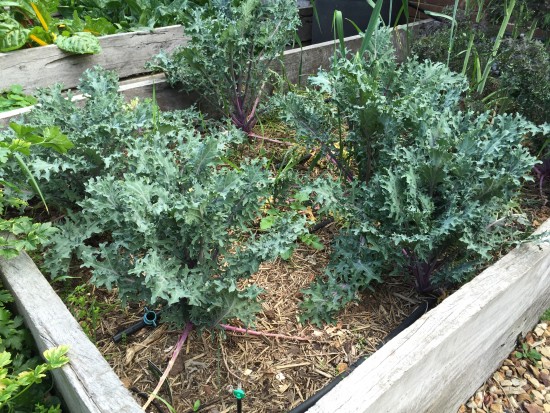 I also have lots of herbs in pots that are growing strong.  Firstly, Lemon Balm.  This amazing herb makes the best lemony herbal tea ever.  I can’t get enough of it.  We now have four pots of lemon balm throughout the garden to keep up with demand.

It is so easy to grow and self sows readily.  Once it has gone to seed in late summer, I just grab the seed stalks and crush the heads over another pot with potting mix, and it starts growing in a month or so.  It also grows easily from a cutting.  It’s a bit like mint, so keep it to pots unless you want it to take over your garden. 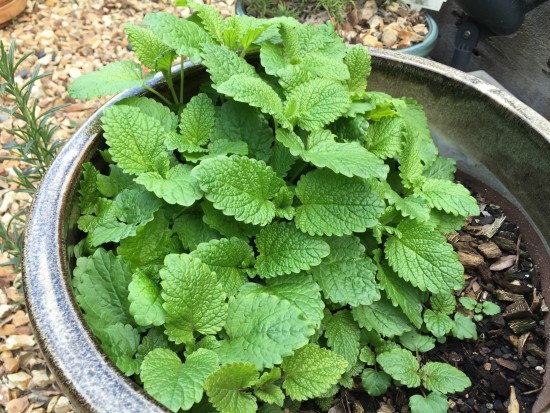 Other herbs we have all in a row from left to right are Thyme, Common Mint, Chocolate Mint and more common mint, Feverfew, Pineapple Sage, Parsley (in the ground), then more Lemon Balm way at the back.

At the end of each garden bed is usually a nasturtium plant and/or a Parsley bush, both self-sown.    Nasturtium leaves and flowers are both edible and have an unusual peppery flavour and are an exciting addition to salads.  Parsley is just amazing in any egg dish.  My favourite is Kim’s scrambled egg with parsley, with eggs fresh from the chooks. 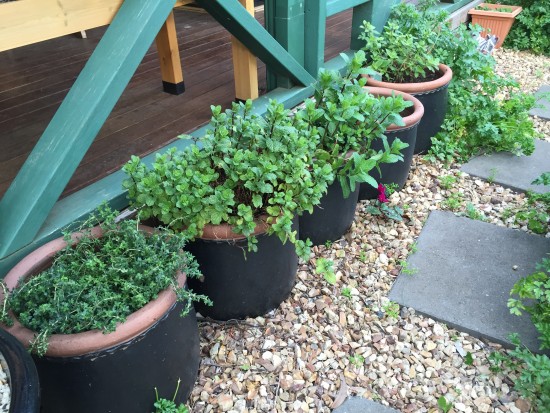 Herbs in a row

I have a couple of garden beds fallow which I didn’t take photos of.  The first is the long bed near the chook house.  I cleaned it of weeds on Sunday and added a few buckets of compost from the chicken run, and dug it over ready for planting tomorrow.  I am going to try my hand at bush beans and climbing beans in this bed.  I have a frame for the climbing beans up one end which is made from an old gazebo frame, and the other half will be the bush beans.  The varieties I am planting will be lazy housewife for the climbing, and Borlotti for the bush beans.

In the front yard is the second fallow bed, which I mulched heavily at the start of the season.  This will be the potato bed this year, and I have three bags of seed potatoes ready to plant.  Now when I say fallow, it really means that it is a bit of a self grow bed.  Can anyone see where I missed a row of garlic bulbs last year, and the odd potato?  I’m just going to let them grow to see what happens, and plant the three types of potato around them. 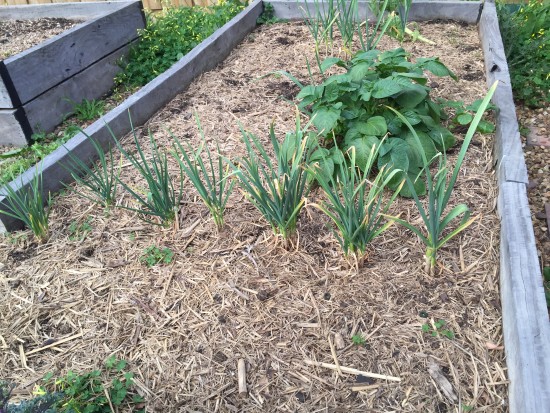 Finally, the last garden bed I have is planted out with Australian Purple Garlic.   Once again, I must have missed quite a few tiny spuds last harvest because this bed has potato plants sprouting everywhere.  I have pulled out a few of the smaller ones, and just left the bigger plants behind.  I’m not too fussed if it stunts some of the garlic, because I planted far too many again this year.  I have some of last years garlic in the pantry that we have been still been using in meals.  It won’t go to waste. 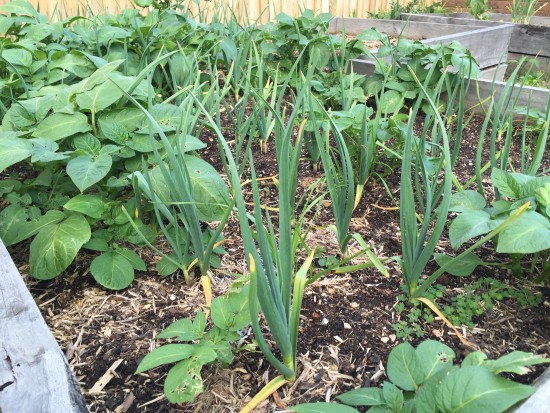 Here’s a better shot of the bed.  The vacant section at the back of it will be sown this weekend with more Sweet Corn and some pumpkins. 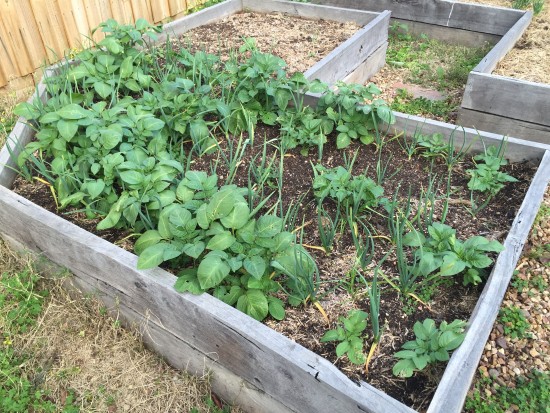 I was given a big second-hand planter box by my daughter Megan on Sunday for Father’s Day, so I’m going to fix that up and plant some strawberries in it.  I also have a few pots lying around that I will be putting a few more veggies, as I am going all out with containers this year.  We also have the wicking bed in the pool area that is bare.  The soil is spent from two successive crops, so will have to add lots of compost to it before I plant anything into it.  The geotextile is still intact so it should wick okay once I fill up the reservoir.

So that’s the early spring garden!  What have you got growing at the moment?  I would love to hear what vegetable you have on the go.