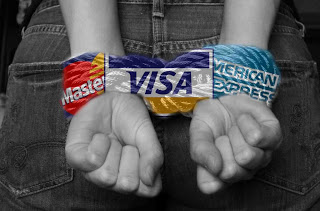 I have been thinking a lot about the different mechanisms that fuel our consumer culture.  Our current modus operandi is unsustainable.

So lets talk about our burgeoning credit card debt and the psychological effect when paying cash vs card.

It’s not something people normally want to deal with so it is time to bring it out in the open.

How did it get our consumer culture become so prevalent?

Why is credit card debt now approaching A$50 billion in Australia?

Before we answer those two questions, lets break down that debt figure into smaller numbers to make it easier to digest.

Based on a population of 23 million that is A$2,173 for every man, woman, and child; I dare say that quite a few of those don’t have credit cards to begin with.

Case in point, before Kim and I started our green journey we are ashamed to admit that we were around A$22,000 in debt on credit cards.  If we paid the minimum payment of $200 a month, it would have taken us 9.2 years to clear it.  And that is without adding any more to the balance.

We paid it off month by month, add more than the minimum payment, and then throwing more on it as the savings from our new lifestyle began to manifest.

It took us a couple of years, but we did it.  We paid it off.  We got rid of all high interest cards, consolidated into one and lowered the cards limit down to $6000 (in case of emergencies).

So we were prone to live beyond our means, and the Reserve Bank of Australia stats indicate that Australians are in debt, what makes people spend so much on cards?

Well, some recent research has found whilst there is a pain mechanism associated with handing over cash for a purchase, there is no similar psychological trigger or reaction when paying by credit card.

Studies conducted by George Loewenstein and his colleagues and published in 1998 and 2001 looking at whether people experienced pleasure or pain when shopping.

“One of the many interesting findings was that paying in cash elicited greater psychological pain than other modes of payment, including the use of cards or delayed payment methods.

The suggested reason for this was the ‘de-coupling’ of the actual purchase and the pain of paying for it. In other words, handing over cash to a shop assistant couples a loss of available money with a purchase.

By paying with a credit card, consumers created a buffer zone between the purchase of the product and the loss of their money (both psychologically and temporally). ” – source.

Have a listen to this snippet of audio that recently aired on the Radio National show Talking Shop.  It is a conversation between Kirsten Drysdale from ABC TV’s The Checkout and Dr Paul Harrison.

I have also noticed this effect since we started taking credit cards as payment for products during our workshops.  People who have cash only buy the essentials, but those that pay by credit go all out!  Not that I am complaining about sales at our sustainable living workshops, it is just an observation to back up the research.

Let me put it to you straight.  If you pay cash, you are prone to spend less on novelty items or what I call wants.  Inversely, if you go shopping on credit, then you will be likely to spend more on stuff you just don’t need.

My advice to you all is if you are one to decouple the purchase from the pain, then do the opposite to what the credit card commercials advice; “please leave home without it!”  Cash is king for a reason, and will help to keep your spending under control.  I shudder when I have to hand over a fist full of $100 notes!

If you are after some more tips on how Kim and I budget, have a listen to TGoG podcast episode 64, which we recorded a couple of months back.  It is titled “How We Budget and Tips to Save Money“.  It is one of the most popular episodes that we have published.

So who is ready to get their cash flow under control? Or who has already taken big steps to reducing their debt, which has helped them live a more comfortable lifestyle?