I mentioned this a while ago to my two lovely daughters that it would be nice to attend a Salami making course, so with Kim’s help, they found a course that was being held not too far away from where we live.  It was a very thoughtful birthday present to their old dad!

So to that end, I attended a Secrets in Salami Making master class.

It was held at Cellars Plus in North Melbourne, just across the road from Queen Victoria Markets.  If you are interested in attending the course, you can find it at sausagesmadesimple.com.au

As I was traveling to the venue, I thought to myself that it would be fantastic if I could take photos of all the steps so that I could write-up a fairly comprehensive blog post to share with you all.

Alas, it was not to be.  Would you believe that we had to sign a waiver to agreed to not take photos whilst on the premises.  I don’t know the reasoning behind this, but I was a bit miffed about that to say the least. 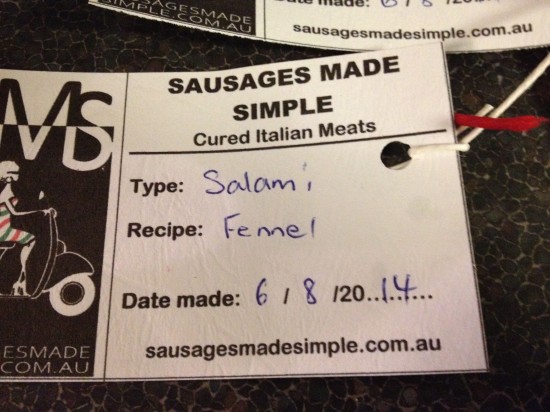 Always label your salami so you know when it is ready to eat.

We had to bring a few utensils, like a sharp knife, chopping board, apron, and a notebook and pen.  Also I took a large container in which to transport the salami home in.  I didn’t really think about this too much, and took a small knife, that I sharpened on our knife steel.  More about that later.

Anyway, I won’t be sharing any recipe, but I will tell you what we did.

Firstly we had to cut the pork shoulder, and separate it from the skin.  It had to be in 1cm (½ inch) cubes.  There also needed to be at least 25% of fat mixed in with the meat.  My knife was not up to the job.  Next time I will use my largest and sharpest knife in my knife block.  It took ages to cut through all that pork. 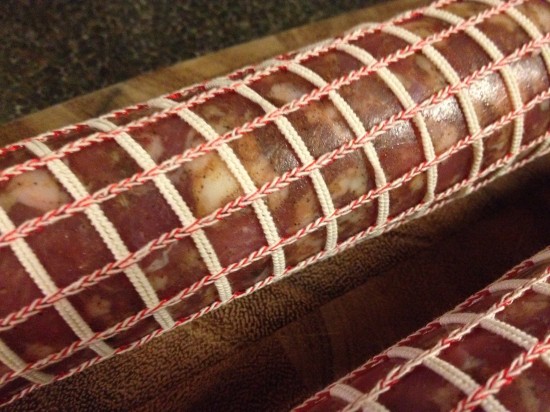 You can see the fat marbling through the casing

Then we ground about 1.1kg (2.4lbs) of pork shoulder meat using an electric grinder.  The mince was quite coarse and I believe that we used a size 12 cutting blade.

Next we had to measure out the salt, ground pepper, fennel seeds, chilli flakes, and spicy pepper paste.  I was surprised to find that this recipe did not have any sodium nitrate added.

After I thoroughly mixed all the dry ingredients into the mince, we then scooped the sausage mixture into the filling machine.  We used manufactured collagen casings, which need to be soaked in water.  These were then tied in a knot at one end, tied off again with red twine, and then pulled the casing over the funnel of the filling machine.  I then pricked the end with the pricking tool, to let a little bit of air out of the casing. 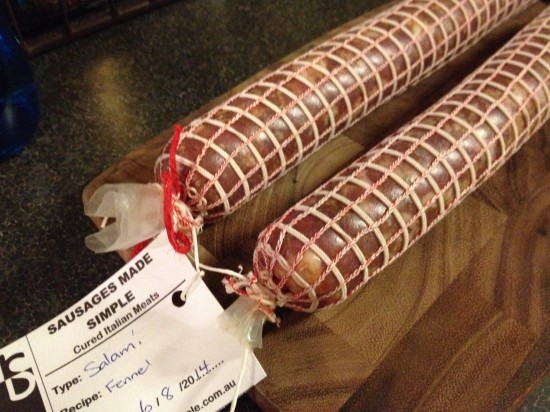 I then asked a classmate to carefully cranked the handle to fill the casing whilst holding the casing with the other.  A bit tricky, but after the second salami, I was a natural!

The teacher then checked for firmness (minds above the belt please).  My salami was firm enough, so I didn’t need to tie a string around the middle to firm it up.

Then all that was left to do was leave about 7cm (2.7 inches), tie it off with red twine in a double knot, and slide netting over the salami using a salami tube.  All very cool. 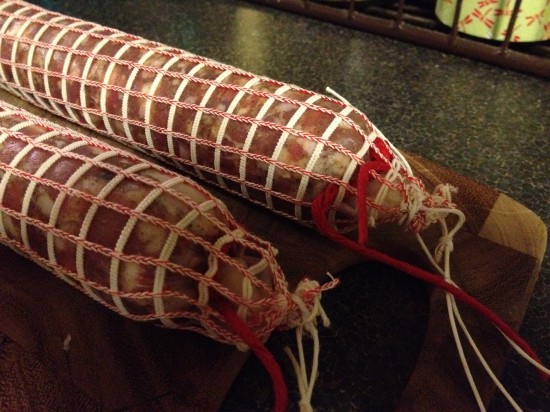 Salami ends tied off with loop for hanging.

We then had to check for any air pockets and prick them out with a pricking tool.

After washing our hands, the teacher then let us sample a few types of salami on some french loaf.  There was a fennel style just like we had made, but without chilli flakes.  Also we tried a chilli flavoured salami, which was equally delicious.

All I had to do then was wash up my utensils, pack away my salami, and travel home.

Once home, I showed Kim my two salami (why show her one, when a man has two!).  She was mightily impressed with the size and firmness of my creation.  The salami had to rest horizontally for the evening, so I placed them on a clean chopping board and put a cheese cloth over them.

Ben was also very impressed, and his first thought was of putting them on pizza.  I suppose I could whip up a batch of mozzarella to go with it! 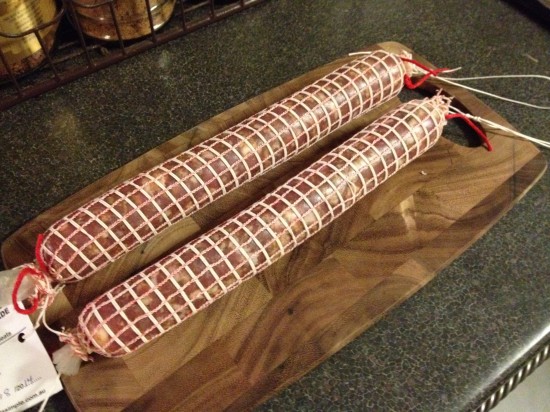 Tonight when I got home, I hung them up in the laundry on the drying rack, where they will stay for about four weeks while they cure.  We were told that the environment needed to be about 70% humidity, 13-15°C (55-59F), and it must have airflow to prevent mould growth.

I was hoping to hang them in my cheese fridge, but the last one condition knocked that on the head.  Besides, they were too long to fix in the fridge anyway!  If it does grow any mould, I have been told to wipe it off using a dry cloth with a little olive oil. 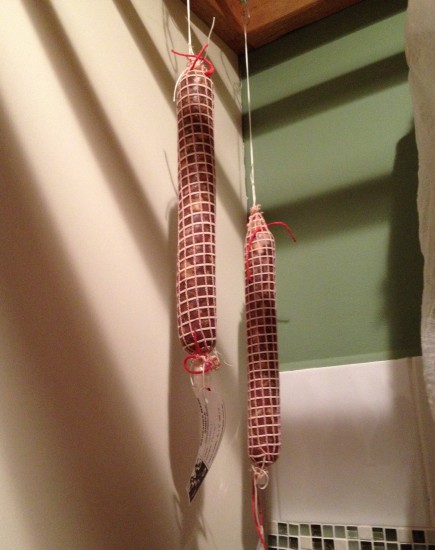 Once cured, we will vac pack for storage in the normal refrigerator at 4°C.

Looking forward to Wednesday 3rd of September to try this delightful creation.

The great news is that my friend Stacey has offered me her seldom used Sausage machine for a small fee.  I am very excited of making a few more smallgoods like this one.   I will get a kit from Cellar Plus, and try to whip up some more cured meat using my newly learnt skills.  I will also try and source the meat locally, and biodynamic if I can get it.

With all the cheese and the salami around here, the laundry looks like a deli counter at Queen Vic Markets!

Where will I find the time?