Ah, the trusty wheelbarrow.  It was broken, and now it is not, all because I did not fall the into the consumer trap.  Let me explain why I began repairing my wheelbarrow instead of buying a new one.

I have owned this steel wheelbarrow for over 14 years.  It has been reliable until a year ago, when one of the wooden braces broke, and the tire got a puncture about a month ago.  Oh, and it squeaked like crazy when you pushed it along.  Annoying or what!

The steel tray is battered and bruised from many loads whilst landscaping my yard, but it is still solid and sound.

Then I snapped out of it.  Why would I buy a new wheelbarrow, when all I had to do was get a new inner-tube and replace the broken brace?  So that is exactly what I did, and all it cost me was $16 and an hour of my time!

Firstly, I had to remove the broken parts.  Pretty easy.  Just loosen a few nuts and bolts and it all slipped apart. 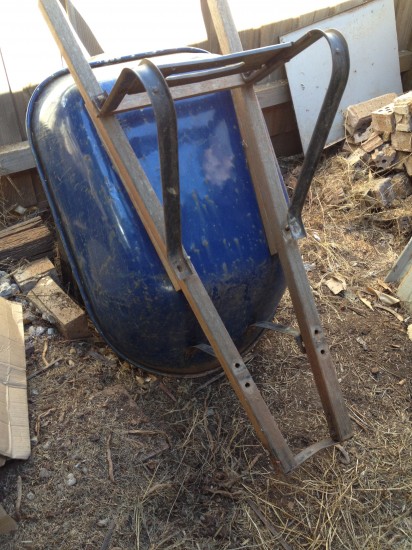 So the first job was to source a new inner-tube.  I needed a 4.8″ tube, which I found down at the same hardware warehouse that I was making gooey eyes at the new wheelbarrows.  For a miserly sum of $16, a new tube was mine. 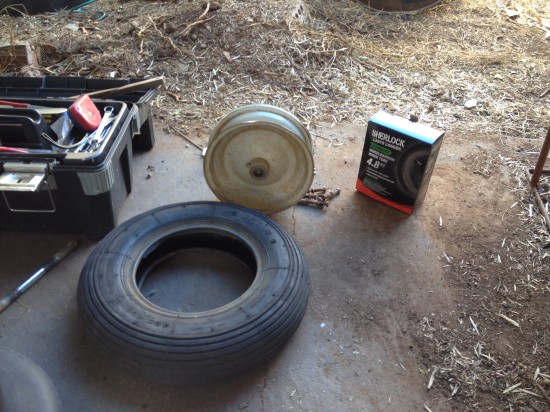 Tyre and tube removed from wheel

Removing the tyre and tube from the wheel hub is pretty easy.  It took me back to all of those bicycle punctures that I used to repair as a kid.  My Dad’s philosophy was that if we wanted to ride out bikes, we had to figure out how to fix them when they broke.  I thank him for that very valuable lesson today.

Using a couple of flat screwdrivers, you lever the tyre around the rim until it pops off.  Pulled out the old tube then all I did was fit the wheel on one side of the tyre, then squeeze in the tube, fitting the valve through the hole.  With the screwdriver, I gently moved the tyre back into place.

The real test was when I inflated the tyre to make sure that I hadn’t kinked the tube inside the rim.  It all good, so I inflated it all the way to 20 psi. 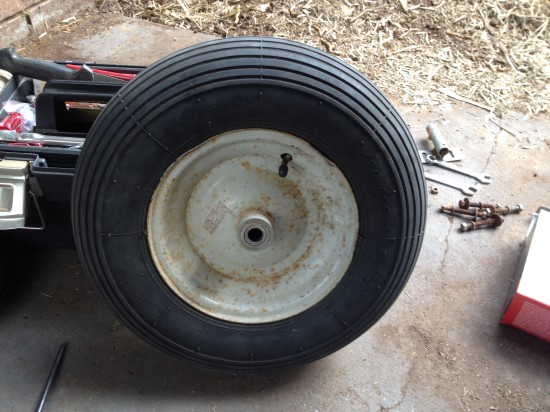 The next job was to replicate the broken brace.  I think I smashed it against something a while back, and it had snapped in two, and rubbing on the tyre.  It may have even caused the puncture.

I found some old skirting board, cut it to length with a mitre saw, and drilled two holes as per the broken brace. 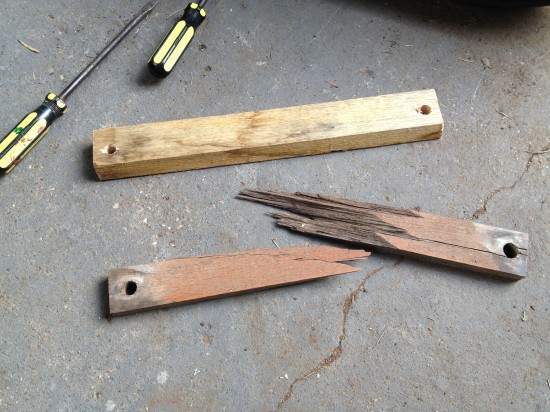 I made quick work of putting it all back together again.  On with the brace, nice and tight. 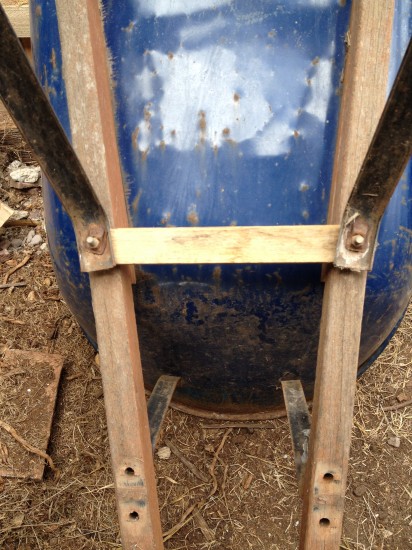 Repaired brace fitted back on wheelbarrow

Then on with the wheel.  All lined up, and bolted on tight.  I even gave the axle a wipe over with a greasy rag to apply some well deserved lubricant.  The persistent squeak has gone as well.

Looking good so far.  I tightened up all the other nuts and bolts on the wheelbarrow, so that it will last another 14 years or so. 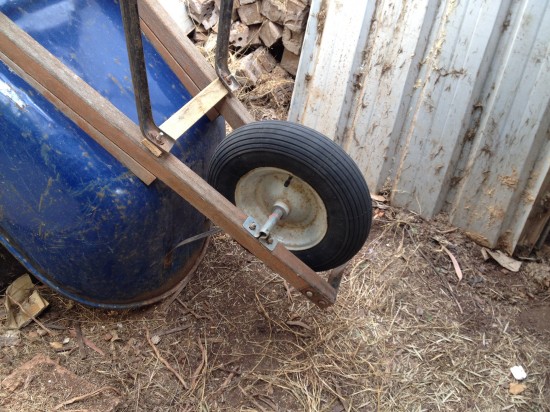 I took it for a road test around the yard, mainly to show off in front of Kim and Ben.  Prancing like a pony with a new saddle, I was.  The repair work was a roaring success, and felt like it was brand new.  I have never appreciated my wheelbarrow more than I have today. 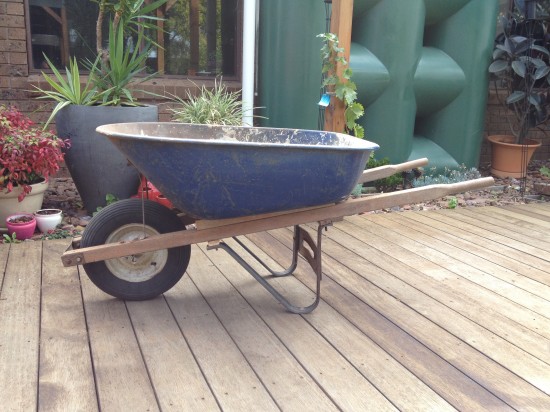 Now because I took the time to repair my wheelbarrow, which only to one hour out of my day, I saved a quite a few bucks.

I just love DIY savings and I am proud of the fact that I did it all myself and preserved my trusty old barrow.

So I reckon that the moral of the story is this;

“We live in a world of instant gratification, the world of the quick fix.  It is not until we remove ourselves from the rat race and downshift, that we find that the slow fix is far more rewarding” – Gavin Webber