About a year ago, I reported on the failure of the lining for the VegTrug that I purchased about 2 years ago.  It was time to carry out a VegTrug repair. 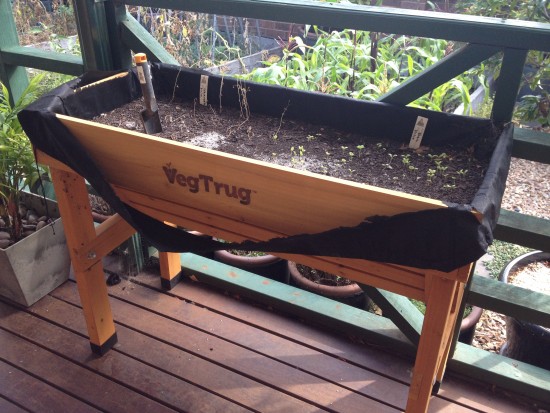 VegTrug Fail – Liner is rotting in less than 12 months

The issue with the lining was that I had exposed it to Ultraviolet light, which degrades the plastic that it’s made from.  I should have followed the instructions which said that I should have tucked the liner back under the level of the soil.

So, a year later (can’t rush these things), I decided upon a course of action.  I was offered a replacement liner by the company, however I chose to come up with my own longer lasting solution.

I found a UV resistant shade cloth that I had stored in the shed, removed all the soil from the old liner into my wheelbarrow, and then staple gunned it to the inside of the VegTrug. 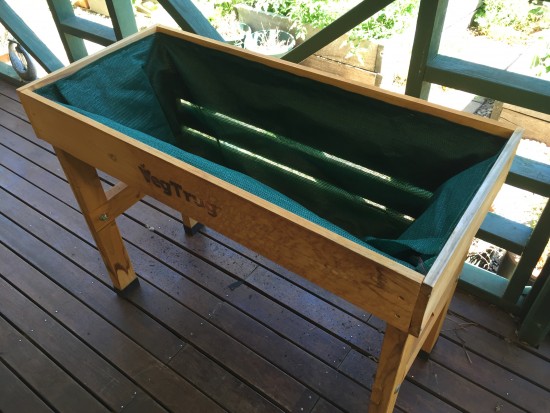 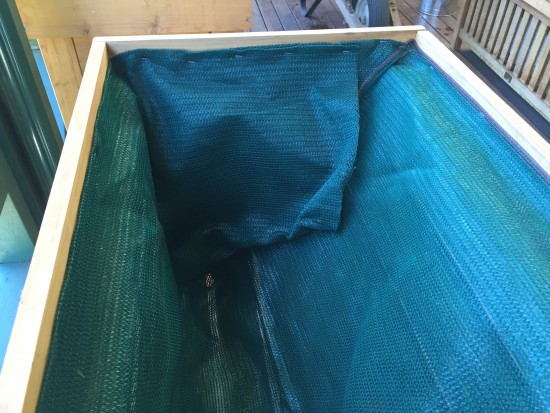 Liner excess tucked into the inside.

I have to fold a fair bit of it over, but it was better than cutting it to shape and fiddling around for ages.  It took me only 10 minutes to fix this liner in place. 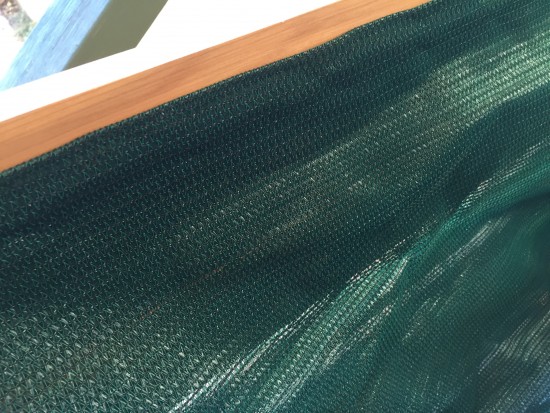 Not a bad job, if I do say so myself! 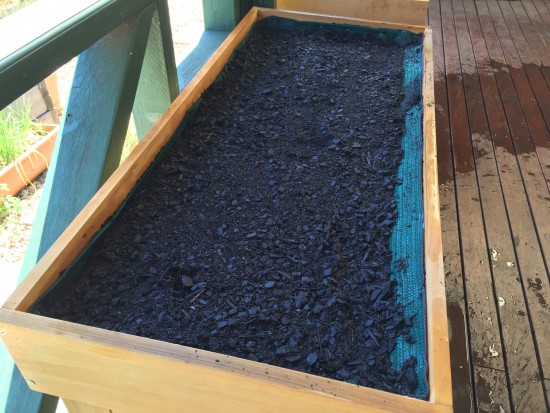 The soil was very hydrophobic, with the water beading on top.  This often occurs when your soil is completely dry.

To fix the issue, I mix in about 500 gm of organic pelletised chicken manure in to the soil, then add a few drops of washing detergent to a 9 litre watering can and filled it with water, and watered the soil.  The tiny amount of detergent breaks the surface tension caused by the hydrophobic soil and allows it to soak in.  It works like a charm.

This VegTrug was placed on our deck and receives about 4 hours of sunlight a day.  It is sheltered from the harsh midday sun, so they are an ideal place to grow lettuce greens. 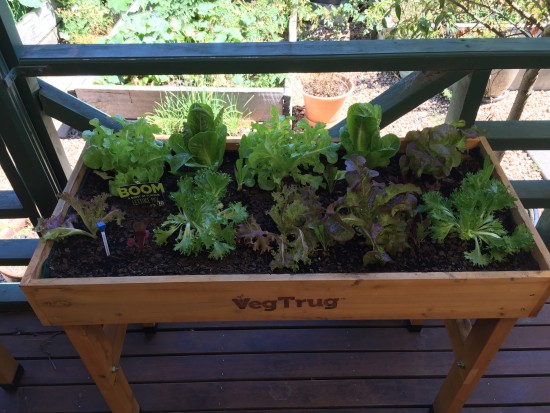 Because I have 2 VegTrug, here is one that I repaired and planted out two weeks ago with pick again lettuce.  We have harvested from it twice now for a salad and because it was growing so well which is the main reason I decided to fix the second one today. 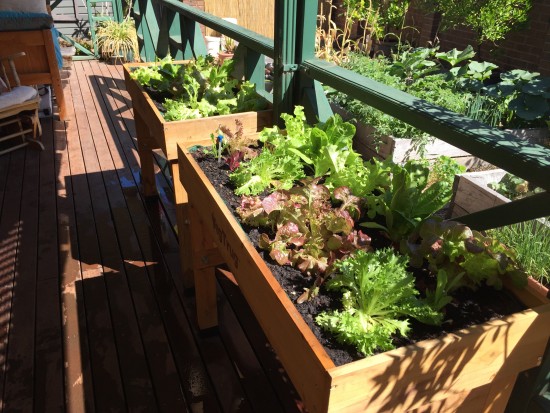 I did cheat a little and purchased the seedlings from our local nursery, but this late in the season they were on sale for half price.  I also interplanted the big lettuces with small baby leaf that will grow to replace them as the older ones bolt to seed in about a month or so.

Now we have an abundant salad garden and are avoiding any potential salad contamination scares by growing our own leaves.  Kim is happy, so I am very happy with my VegTrug repair!

I’m pleased with my repair job and even more so because it didn’t cost me anything except a few staples.

And it saved us a small fortune in salad leaves.  Got to be happy about that!

Our dogs have been a bit rambunctious of late and have been playing tug of war with their toys.  Naughty doggies! 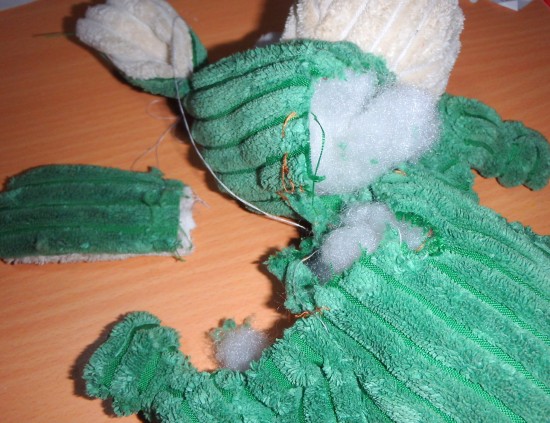 We bought them some tough organic cotton eco-toys to play with for Christmas, this one stuffed with recycled fleece made from PET bottles.  Inevitably, with enough tugging, the fabric tears.

So what to do?  Well it was off to Kim’s Dolls Hospital for repairs. 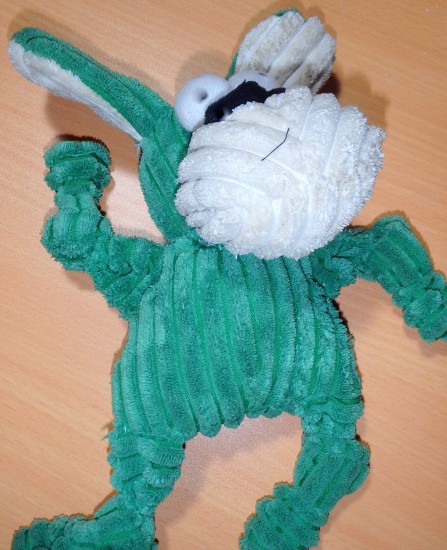 Dog toy as good as new!

Kim learnt to sew back in High School and hasn’t forgotten how to throw a few stitches around.  She fixed up this toy, repaired the hole in the neck, and fastened the ear back on.  It only took her about 10 minutes and in that time she also repaired another toy in the same sorry state of affairs as this one.

Out of curiosity, I asked my daughter Amy (a High School teacher) if the kids learnt to sew theses days.  She said that it was an elective at her school, so that is encouraging.  It would be sad for these very simple skills to be lost to the consumer culture.

By the way, I can also sew.  I was taught in the Navy out of necessity more than anything else, because when at sea there is no one else to sew a button or a patch on for you.  Each Sailor was issued with a housewife (what we called a sewing kit) and you soon learnt how to use it or get a dreaded Kit Muster (lay out your entire issued kit on a blanket in straight rows) if you turned up on parade with a missing button or ripped trousers etc.

The simple skill of sewing by hand is something that I believe should be passed on to our kids, so next time Ben loses a button Kim and I will teach him how to sew.

Anyway, getting back to the story.  Both our dogs watched Kim intently as she repaired both their toys.  They sat patiently for the entire time it took to sew the limbs back on.  You can imagine their delight when Kim gave them back their toys. 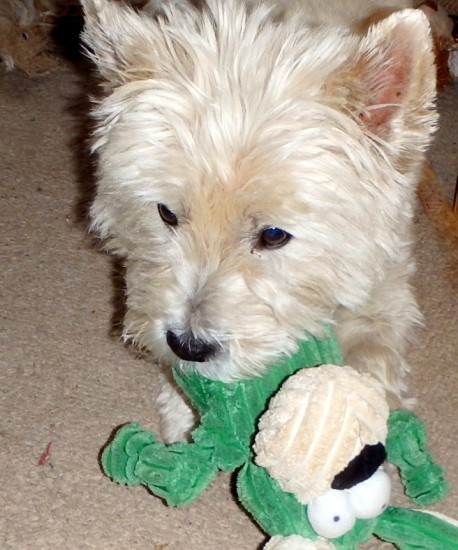 Well done to Kim for opening up the Dolls Hospital and taking the time to repair the dog’s toys.  That should last them another few months of tug of war!

Have any of you passed on hand sewing skills to your kids, or recently been taught by a family relative?  It would be interesting to know how many still know how to sew and teach others the art of sewing.  Chime in with a comment to add to the conversation.

Listen to the Episode Below (00:36:30)
Download Listen in a New Window iTunes Stitcher SoundCloud Leave a Review Clammr It Subscribe via RSS Subscribe on Android RSS Patreon

Our topic is this week is Downshifting.  We explain why I downshifted and how it is possible by living a simple/sustainable lifestyle. 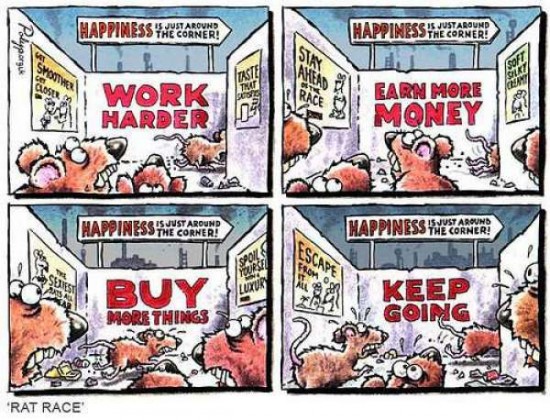 We cover the decision-making process, finances, family discussion, telecommuting, and much, much more.  It was a big decision, but it was one of the best decisions that we ever made.

And the best thing was that we didn’t go in for the sea change/tree change, we downshifted right where we were with what we had.  It also gave us time to start our own small business teaching others green living skills.  Without the downshift, we wouldn’t have taken that most enjoyable step.

We also talk about smaller homes that allows bigger yards, and the current practice of banging out McMansions in new suburbs.

Kim also has a soft spot for Esther the wonder Pig, whose friends also had a downshift experience.

So, if you liked the show or have downshifted yourself, please leave a comment.  We would love to read your story.

Also if you really enjoyed the show please take the time to leave a rating and review over on iTunes, using the iTunes button under the player.  It would really be great to get some feedback about our current format, now that I have a semi-permanent co-host.