Are you sick of all the native birdlife eating all of your chicken feed?

I know that I am.  I reckon that about half of the feed that I put out each day gets eaten by native pigeons and sparrows.  That gets expensive after awhile.

Hopefully, from tomorrow we will no longer have this issue. 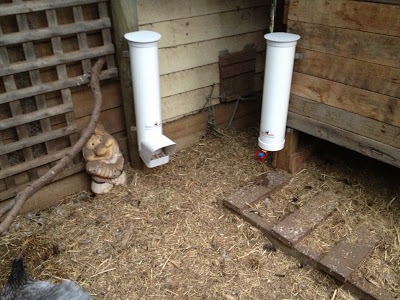 So after our soap making workshop, I fitted some new feeders and a waterer that I bought from Royal Rooster during the week.  I had been looking around for a feeder that will deter smaller birds from eating the chicken feed for ages.  The Grandpa feeder looked promising, whereby the chooks step on a plate at the front of the feeder and the lid opens for the hens.  They can be very expensive, unless of course you make it yourself (like my mate Mick).

The Royal Rooster model has a removable cap on top of the feeder and waterer where you pour the contents.  The waterer has a little bowl and float system, which fills up when the bowl empties.  It holds about 10 litres (2.5 gallons) of water. 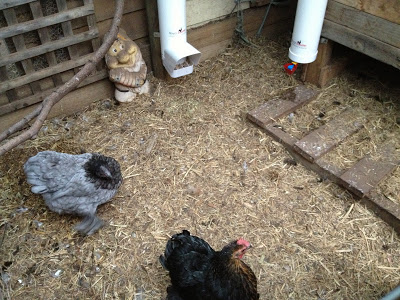 I opted for something a little less expensive, and simpler.  Something that my particularly dumb chickens could fathom.  The reason I say dumb, is because most of them still have not figured out how to drink from the chicken nipple waterers.  The bantams (who are clever) figured their feeder and waterer out straight away. 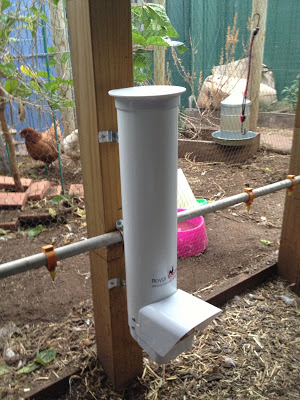 The feeders are easy to hang.  I chose not to let them hang off the chicken wire, but to mount them on the structural uprights with pipe saddles, which you can see behind the feeder pictured above.  There are two hooks on the back of the feeder that slide down onto the pipe saddles. 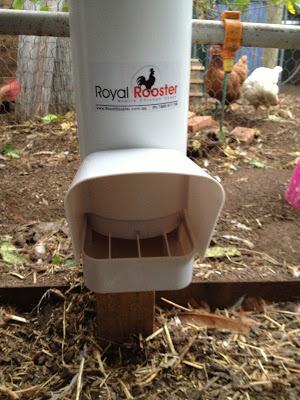 The hood over the feeder is to stop water from contaminating the feed, and to deter larger birds.  I mounted them high enough so that pigeons can’t reach them, and I am hoping sparrows can’t figure them out.  Time will tell. At least I will not walk outside to see a massive flock of the little buggers flying away from the metal feeder. 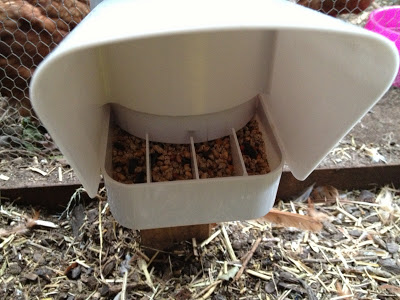 You can see the feed in the feeding tray.  It refills via gravity as the hens eat their fill.  I am only going to place on day’s rations out daily for the first week, just to see if it builds up.  If it does, then there is my proof that the local neighbourhood sparrow community have been thwarted.  The large hens have figured them out already, but they are bamboozled to where the feed is coming from.  You should have seen them looking all around the feeder checking out if there was another way into the food!  It was funny to watch. 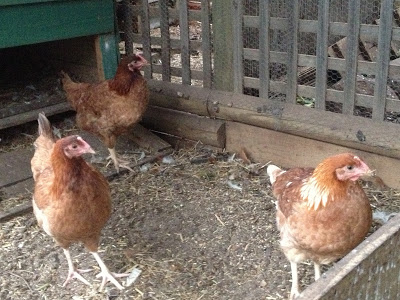 Oh, and as promised last week, here are my three new chooks.  No names as yet, as Kim is still yet to decide upon something suitable.  She likes to observe them for a while before figuring out what to name them.  The bigger hens are still bossing them around, but getting used to them.

I have been segregating them during the day, with the older hens in the run, and the pullets in the undercover area.  At dusk, they all meet up and sleep in the house.  I think that they are starting to get used to each other , but it will take about another week or two before the pullets are integrated into the flock.

The egg statistics are still down, with the bantams still barren, and only one brown egg a day.  The leghorns are also off the lay, so hopefully in the next few weeks it will be full steam ahead, especially when the pullets get their act together.

I can taste the omelette already!

Do any of you have a subtle or clever ways of keeping unwanted birds out of your chicken feed?