My mother in law Pam, recently asked how I made the garden beds in my veggie patch. This is the story of how I did it!

I based the design on the “No Dig Garden” developed by Esther Dean. I read her little book, which was full of great information about establishing a garden for Australian conditions. I modified the method slightly as per the excellent book “Greeniology”, by Tanya Ha, and added raised garden beds to make it easier to work on. The soil in Melton is clay based and is very hard when dry. There was very little organic matter in the first 2 cm of topsoil, so I had to improve the soil before I planted and improve drainage.

I decided to use redressed old red gum sleepers as the frame for the beds and constructed them 2100 x 1200 x 100 cm and spaced the beds 70 cm apart. This was enough space to lay some pavers for a little path between each bed. The beds were fastened together with 100 mm galvanised nails with a butt joint, and the wood was so hard that I had to pre-drill each nail hole. During the construction I managed to hit my left shin with the full force of a hammer blow! It swelled up like a melon. Nice and sore for the rest of the day, but some ice helped the swelling go down.

As recommended by Esther Dean’s book, I filled the beds in the following order. The first layer was a cover of cardboard and newspaper about 5 sheets thick. This ground cover was to kill the weeds, grass and provide food for the earthworms. Next was a 10 cm layer of either Lucerne hay or pea straw. I chose pea straw and Amy and Megan laid it for me. The third layer was a 2 cm layer of Dynamic Lifter (you can use well-rotted sheep or chicken manure). For the four beds I finished off an entire 25 Kg bag of very smelly Dynamic Lifter. I then covered the DL with another 5 cm layer of pea straw and then a layer 20 cm thick of mushroom compost garden mix.

I think it was a 50-50 mix of mushroom compost and a loam type soil. It was filled with organic matter and was very suitable for the purpose of growing vegetables. I ordered 2 cubic metres and used it all! Adam lugged most of it from the roadside and Kim and I raked it level in each bed. Lastly, I topped it off with a 5cm layer of sugar cane mulch, to help conserve water by stopping evaporation. 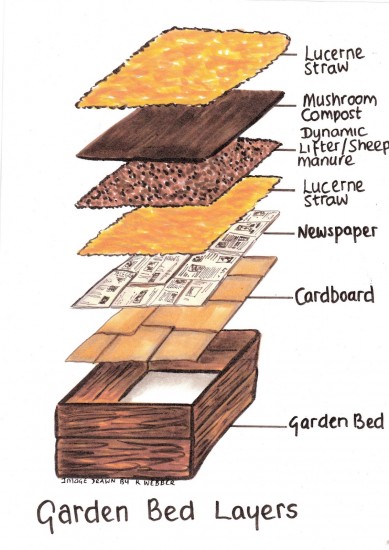 It was a very satisfying feeling to finish all of the beds in one weekend.  The garden beds have settled over the years with the cardboard and newspaper eventually being eaten by earthworms, as has the layers of straw.  I top up each bed with about 10 cm of home made compost each year, just before planting the next crop.

Back to the story.  It was time to planting my veggies. Two great books helped me to decide how and what to plant where, “The Australian Fruit and Vegetable Garden” by Clive Blazey, and the “Organic Gardener” by Jeffrey Hodges. They taught me about how crop rotation works, what vegetables to plant in what season, how to compost successfully, and the science of mulching. I highly recommend each of these books for anyone starting out in growing your own food.  Both were available at my local library.

I knew that planting in May was not the best time to sow, and that being late in Autumn 2007 it was better to plant seedlings where possible. So it was off to the hardware store to buy a selection. I only chose what I thought the kids and Kim would eat, so as to cut down on wastage. I planted broad beans, snow peas and peas in the first bed; beetroot, carrots, spring onions, and Spanish white onions in the second bed. In the third I planted green dragon broccoli, mini cauliflower, Savoy cabbages, red cabbage, and Brussels sprouts (big mistake). In the fourth and last bed I planted a herb garden but soon moved all the herbs to large pots so they were easier to manage. I replaced the herbs with a second crop of broccoli of a different variety, and a few more cabbages. Ben loves broccoli, hence the reason I planted so many.

Everything was successful and I harvested gradually over the next few months. The snow peas were first and we couldn’t stop grazing straight from the bush. The only vegetable that didn’t make it to the table was the Brussels sprouts for two reasons a). no-one liked them except me and b). the heads did not form properly, so I broke them up and added the plants to the compost.

I can positively say that all of my organically produced food tasted fantastic. Fresh, crisp carrots, eye watering onions (I pickled 50% of them) and mouth-watering broccoli. I could go on forever about the taste, but I won’t, however I do urge you to grow your own vegetables if you have the room. Even in pots if you have a balcony!

There is very little maintenance if you mulch well.  I water from the rainwater tank about three times a week depending on the frequency of the natural rainfall.  I would say that between the planting and harvesting, I would spend about five hours a week working in the veg patch.  Not much of a sacrifice, and much better than watching the rubbish available on the television these days.

Besides, the view is so much better outside!

LIKE WHAT YOU'VE READ OR HEARD?
If so, please join thousands of others who receive exclusive weekly online recaps & tips, and get a FREE COPY of my eBook, The Greening of Gavin - My First Year of Living Sustainably.
-37.6777778144.5686375