Renewable energy is one of my passions, and when Kim suggested we take a field trip to a wind farm as part of Ben’s science class, I jumped at the chance.

Kim did the research for the trip, and decided upon a visit to the third largest wind farm in Australia, which was about 101 km (60 miles) away from our home.  It took just under 1 hour 15 minutes to get there.  As I drove along, Kim read out the lesson on wind power out of the science book, and Ben answered the questions.  It certainly passed the time, and I threw in my ‘Dad’ trivia as we went along, as you do. 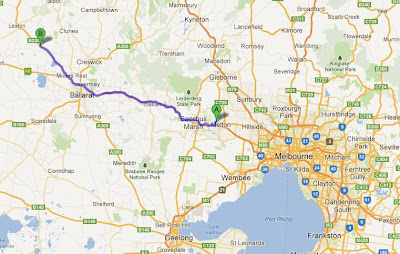 Here is the Wikipedia description of the wind farm;

“The Waubra wind farm is located 35 km north-west of Ballarat and was completed in July 2009. It consists of 128 wind turbines, with associated substations and an operations centre. Each wind turbine has a capacity of 1.5 megawatts (MW), providing a total installed capacity of 192 MW. Waubra is the third largest wind farm in Australia, after Hallett Wind Farm (298MW) and Lake Bonney Wind Farm (279MW).
The green energy generated by the wind farm each year provides electricity for 143,000 households – more than enough to power Ballarat. The Waubra Wind Farm offsets up to 635,000 tonnes of greenhouse gas emissions every year.”

Enough to power Ballarat.  That was impressive.
As we approached the town, we could see the wind turbines turning in the distance. 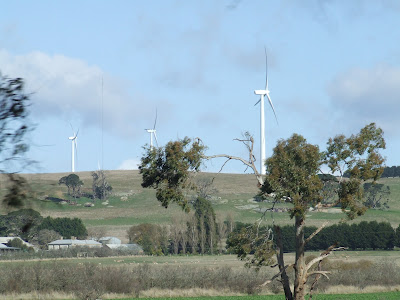 We all got very excited, and as we drove along the Sunraysia Hwy (B220), the wind farm just kept getting bigger and bigger. 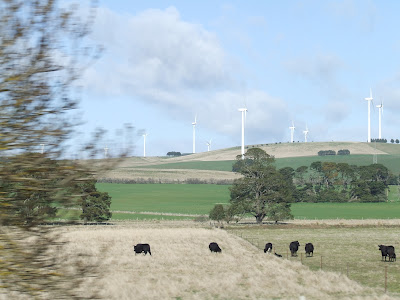 The rolling hills around Waubra are literally covered in wind turbines as far as the eye can see. 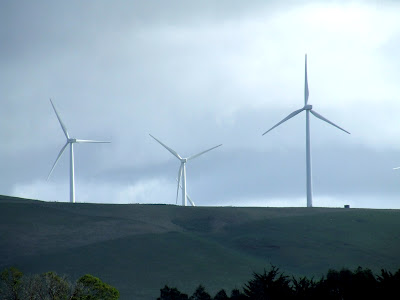 Below is a view from the tourist spot just to the north of the town.  It was okay, but we wanted better.  I dug out my phone and pulled up google maps to see if there was a way to get a better view. 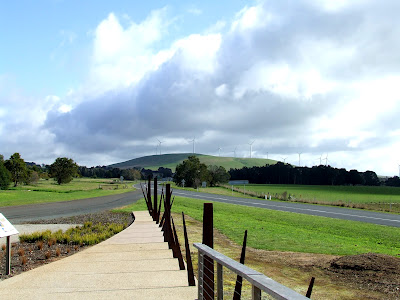 As luck would have it, just to the north of the tourist spot, there was a single lane road called Troys Rd, which weaved its way through the main part of the wind farm. 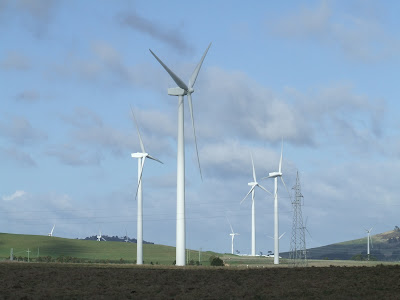 We followed it until we got to this idyllic spot in the countryside.  Nice view, with the some of the turbines off into the distance.  The cows didn’t seam to mind at all, 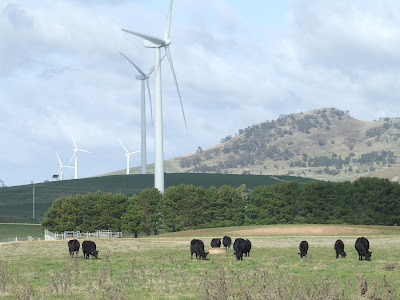 The cows were only about 50 metres away from a tower, and just kept on eating grass.  We were about 200 metres away, and could not hear any noise from the turbines around us.  The wind whistling through the trees was much louder, and take my word for it, it was a very windy day. 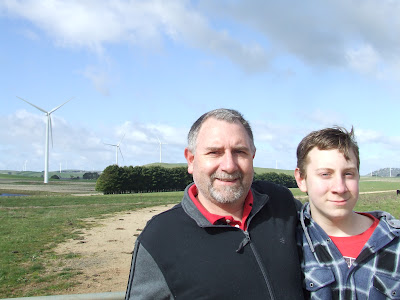 Here is Ben and I smiling for the camera.  I had to take my glasses off because of the transition lenses. 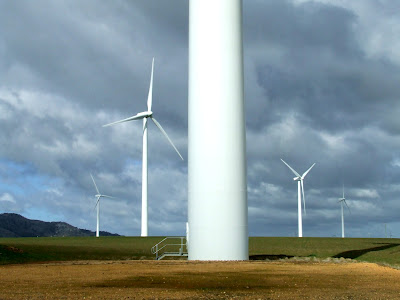 We continued up Troys Rd, until we found a wind turbine close very close to the road, because we wanted to see if we could hear it.

I took a quick video of this turbine that was about 75 metres (250 feet) away from us.  You can just hear the noise made by the tips of the blades as they fly past at about 220 kph (136 mph)!   I warn you in advance, that there is a lot of wind noise in the microphone, for which I apologise. 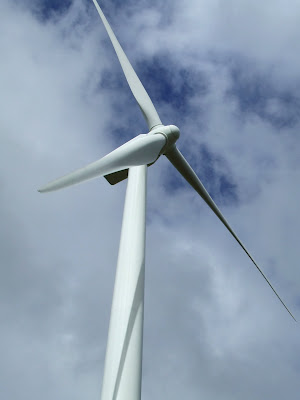 This is a still shot of the turbine that I took the video footage of.  It was so awe inspiring, and we were all excited and giggling like school kids (which was okay for Ben, but funny to see Kim so overwhelmed).
At about 100 metres we could no longer hear the sound, only that of the wind itself, so it goes to show that a lot of the hype as I described in the post titled “Busting Myths About Wind Turbines“, is just that, hype.  After re-reading the post, I noticed that none of the three directors of the astroturf group the Waubra Foundation actually live in the town or anywhere near the wind farm.  It just goes to show that Wind Turbine Syndrome is more than likely to be fabricated by vested interests, with on foot firmly in the fossil fuel camp, delaying action on climate change.
Anyway, we all came away from the visit a little wiser, and full of fresh country air!  A great field trip, and it helped Ben to understand this form of renewable energy just that little bit better.  We are going to visit a coal fired power station next, just to make the comparison, but it won’t be for a few months until after Sustainable House Day.
So what is your verdict?  Good or Bad for us and the planet, or would you rather live next to a coal mine and coal fired power station?
-37.356205143.6361076