On Saturday, we held a clay oven workshop at our place which was well attended by members of the Melton Sustainable Living Group.  I had ten willing workers at my disposal, and I managed to occupy them all on various tasks. 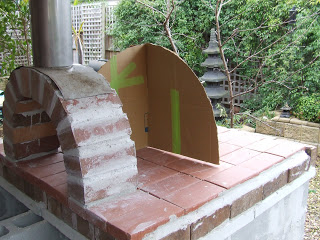 To this in two hours (plus one day’s drying and sand removal)! 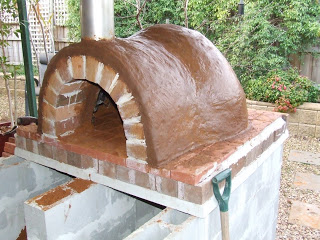 So let me step you through what we did during the workshop.  However, be warned, there are lots of photos (click to enlarge). 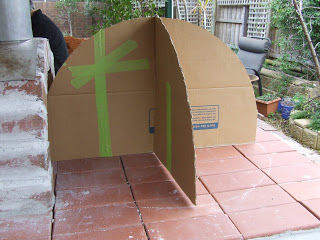 Before everyone turned up at 10am, I received an order at 8am of 1 cubic metre of packing sand, which has a high clay content.  Kim and I had to shift this sand from the roadside to the area where we were making the oven.  It took me the good part of an hour to do this work alone.  After a cuppa and a biscuit, I made this template for the sand dome.  It is 50cm high and 85cm wide. 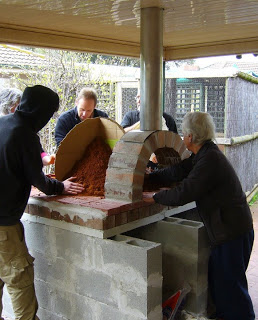 This picture shows how the sand dome was being formed.  Four people on a quadrant building up sand. 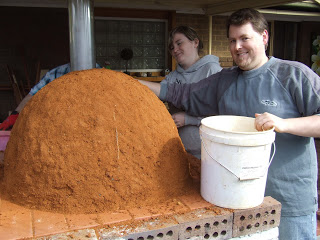 Here is the sand dome nearly finished.  You can just see part of the cardboard template.  Don’t you just love the smiling helpers! 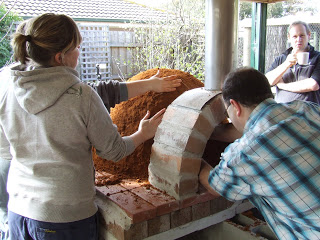 And from the front angle.  The sand dome just touched the front of the door arch. 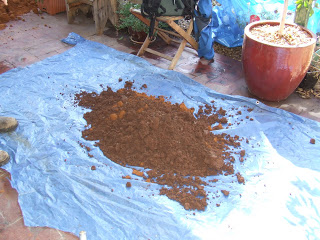 Now that the sand dome was finished, it was time to get down and dirty.  We used a 50% packing sand and 50% clay mixture, and enough water to moisten it. There was quite a bit of aggregate pebbles in the sand as well, and a few handfuls of sugar cane mulch in the clay when we dug it out of the ground.  I didn’t think it needed any more organic matter. 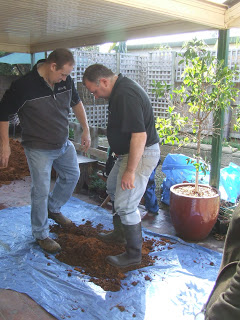 We started off with two stompers….. 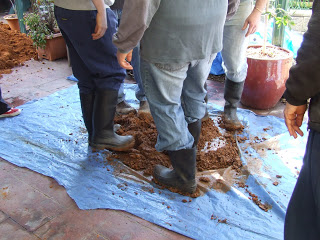 Then there were four.  It became contagious.  It was great fun with everyone in gumboots (wellingtons to those in the UK) to stop their best shoes from getting caked in the stuff. 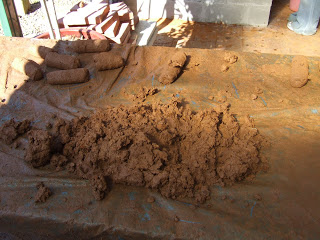 Then on to the table where a team of five helpers made clay logs that were about 6 cm wide and various lengths. 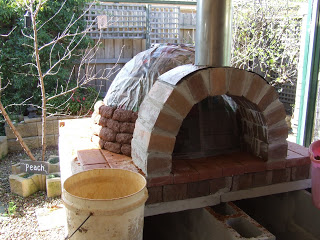 Then yet another team put the logs around the sand dome.  The dome was covered in wet newspaper so that it would make the sand easier to remove once the clay was touch dry. 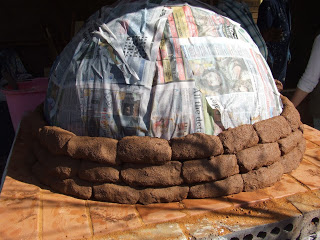 The logs are placed like bricks to add rigidity to the form (well as best as can be). 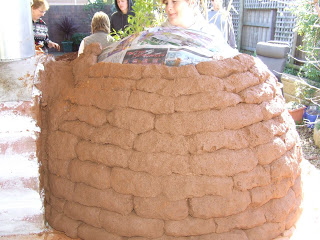 Nearly at the top of the dome.  The dome at this stage was just at the edge of the door bricks. 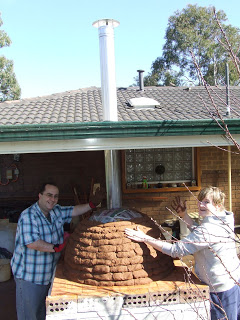 This is the full height of the flue, just so you get a better idea. 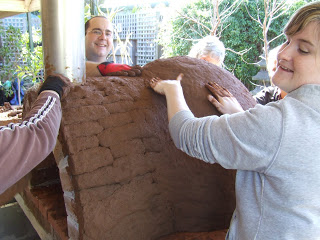 Once the dome was finished, we had to join it to the brick door arch.  More clay logs! 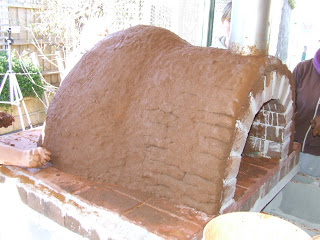 Then we started to smooth all of the cob logs. 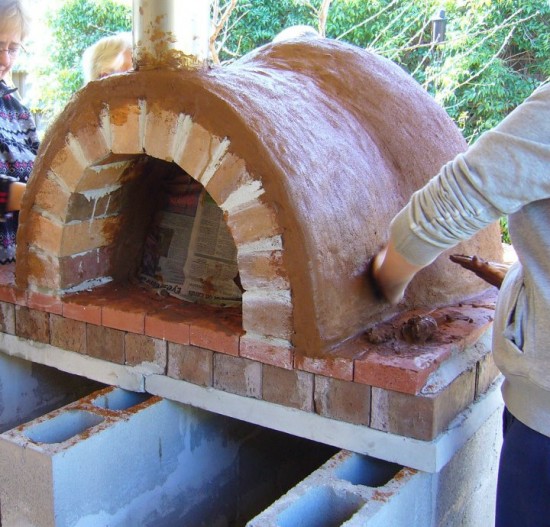 Then we wet our hands and gave it a nice sheen.  We also filled any depressions in the clay dome. 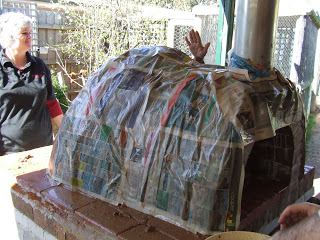 As the sun was shining on the clay, we decided to coat it in wet newspaper to slow down the drying, to hopefully avoid some cracking.  This was the point that the workshop finished, and Kim served us a lunch of home made pizza to order, then dished up buffet style alfresco.  Everyone really enjoyed themselves, and a few people expressed interest at holding another clay oven working bee in about 6 months time.  I am certainly up for it, now that the design seams to work okay.  Thanks to everyone who turned up and lent a hand. 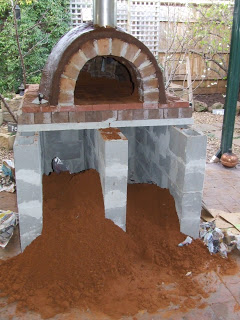 Anyway, yesterday some larger cracks started to appear, so I consulted my Back Yard Ovens Volume II book that I got from Earth Garden magazine, and it suggested that once the clay sets to a cheese like hardness then you should remove the sand.  The reason being is that the clay is trying to shrink, but the sand is getting in the way.  So out with the sand, which I will have to pick up when I get home. 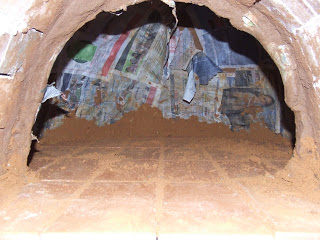 At one stage I had both shoulders jammed in the door arch trying to get the sand out! I wish someone had taken a picture of that.  The sand came out fairly easily once I had undercut the sand dome.  Most of it just collapsed and I just scooped it out with my arms.  The newspaper layer worked well. 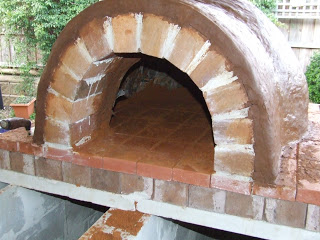 I can’t believe how big it is inside.  I estimate that with the hot coals pushed up around the edges, we will be able to cook 3 pizzas at a time, and afterwards about 4 loaves of bread.

So next steps are to move the sand that I left on the floor, light a small fire on every night for the next week to help the clay dry out, then on the weekend apply the glass wool insulation, chicken wire and clay/sand/cement render.

What do you think of the progress so far?  I am personally ecstatic about the progress, all in under a month of weekend work so far.

Want to learn more? Check out my eBook about how I built this clay oven! 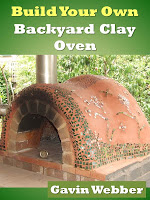 Build Your Own Backyard Clay Oven

It seems like just about everyone wants to cook outdoors these days, and what better way to do it than in your very own backyard clay oven.

This book shows how easy it is to make a clay oven from scratch, and includes detailed instructions, with over 60 photographs and illustrations.

It is time for the humble Barbecue or Grill to move over, and for the backyard oven to step into the role of the ‘must build’ outdoor cooking accessory for the 21st century.

Visit My eBookstore for retailer details
LIKE WHAT YOU'VE READ OR HEARD?
If so, please join thousands of others who receive exclusive weekly online recaps & tips, and get a FREE COPY of my eBook, The Greening of Gavin - My First Year of Living Sustainably.