We had a big bowl of peaches sitting in the fridge that we harvested about a week ago, so we had to find something to do with them before they went off.  The fruit had become too soft to preserve it, so we had to bake something with peaches.  Kim hit upon the idea of making a strudel, which was a great idea.  She had thought that making a strudel was going to be a daunting task, but the other day she found that surprisingly easy. She did cheat a little and used ready made puff pastry, but I don’t blame her as the real stuff takes so long to make.

It was so good that I had to write about this delicious desert.  I believe that you can use any type of stone fruit and it will taste much better with fresh fruit. 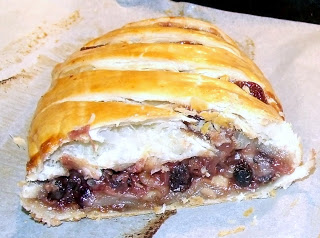 Mix up the fruit, sultanas, cinnamon, half of the white sugar and flour in a mixing bowl.

The filling of a strudel has two parts; this is the fruit part, and the other part is this sugar mixture. So combine the walnuts, brown sugar, bread crumbs and the other half of the white sugar. Give that a mix.

Prepare the Pre-made Strudel Pastry
Put it on a well floured board, with a little more flour over the top. With your rolling pin, make a rectangle shape by joining the two sheets together.  Make sure that the long sides are straight.

Assemble the Strudel
With the less attractive side facing up, and the smoother side facing down (if there is one) – egg wash that really well. Put the sugar mixture down on just 2/3rd of the dough. Put the fruit on the bottom 1/3, and leave about a 5cm (2 inch) space at the bottom and sides.

Fold the Strudel
Start by bringing up the first 5 cm (2″) to help roll it over once, that’s the second third – pinch in the sides a bit to keep it all together. And then the last fold makes the top.  Place the fold on the bottom of your tray to hide the seam..

Bake the Strudel
Kim put the strudel on some greaseproof paper then on a baking tray.  Then cut a slice in the top about every 2.5 cm (1 inch) to give it that signature strudel look, and to vent the air and steam. Paint it very well with egg wash. Cook at 180 degrees C (375 degrees F) for about 40-45 minutes, until it’s browned, beautiful and looks like this.

We cut one of them in half and served the Strudel with fresh cream!  It fed the three of use, and had the other half the next night.  We still have the whole one in the freezer for a time when fresh home-grown peaches are a distant memory!

Easy peasy, and kudos to Kim for giving it a go and making the best strudel I have ever tasted.  Apparently the key the man’s heart is through his stomach, and she knows me too well.  I will keep growing the fruit if you keep making delights like this one!