With summer approaching here in the Southern Hemisphere now that we are past the Vernal Equinox, it is time to start thinking about foods that take us out of our winter long hibernation.

Salads are a great dish with which to do that, but how many of you have made up a salad only to find that after a few days it goes limp in the fridge or doesn’t transport very well.

Well never fear, Kim to the rescue.  Yes, Kim has found a solution that will fix all your salad woes.  It’s Salad in a Jar! 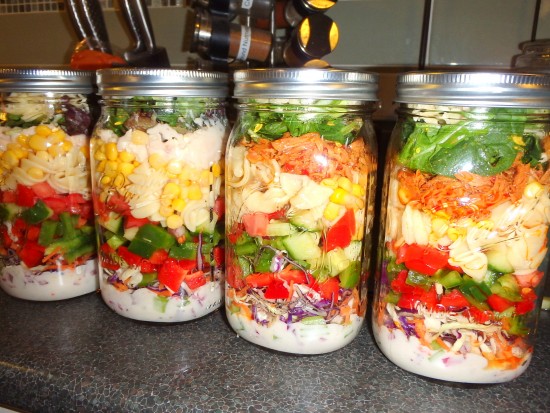 Salad in a Jar

In this post, I am going to step you through the process of making one of these most excellent salads. 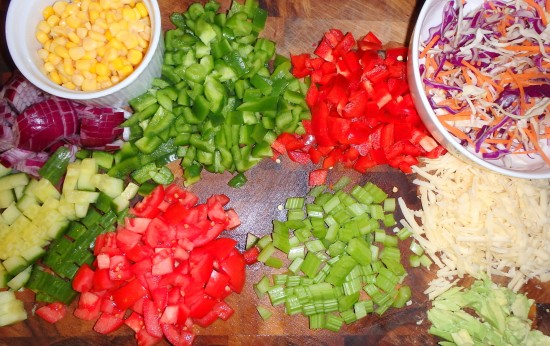 Firstly select whatever vegetables you have in the garden or fridge.  Chop them up into bits ready to complete your salad. 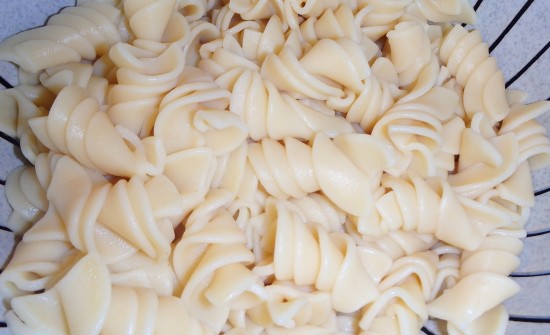 Cook up some organic pasta and allow to cool. 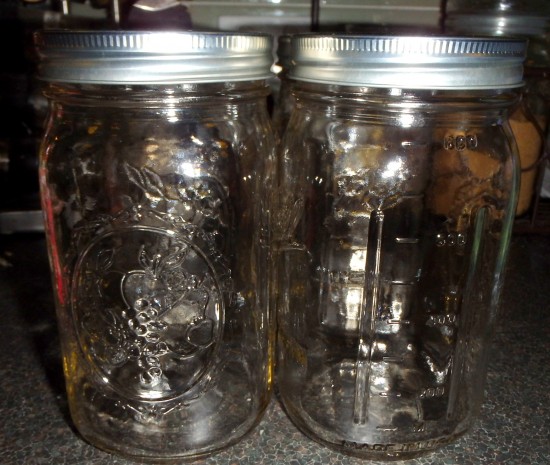 Grab a few 950 ml (1 quart) mason jars and make sure they are thoroughly clean. 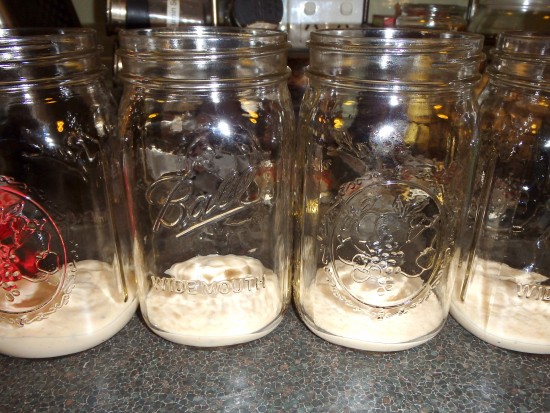 Add 2 Tablespoons of your favourite dressing. 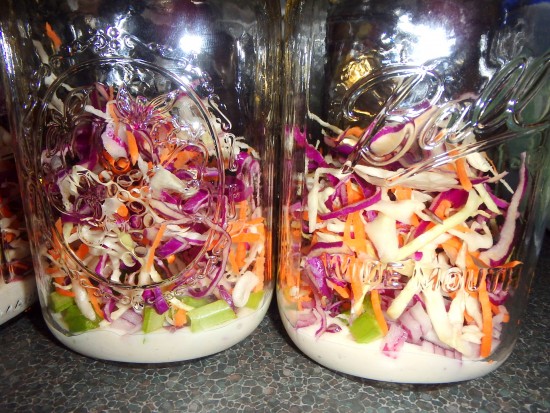 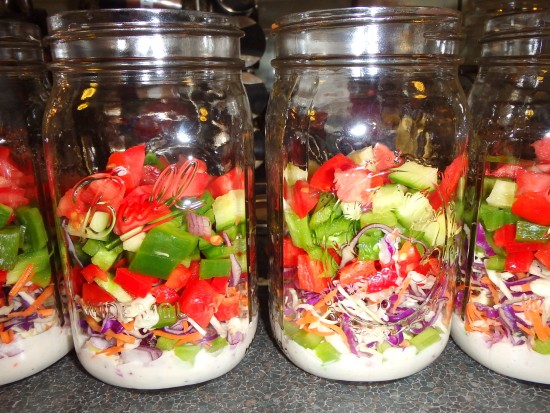 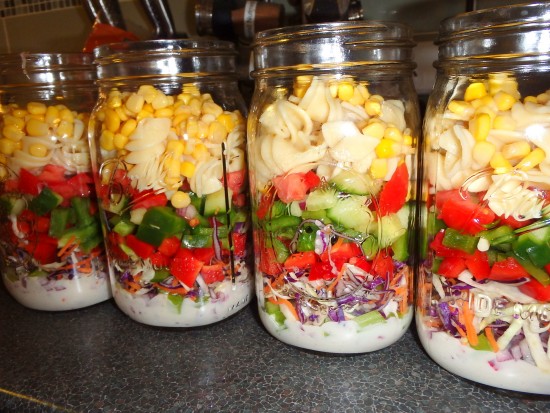 Add your cooked pasta and some sweet corn kernels. 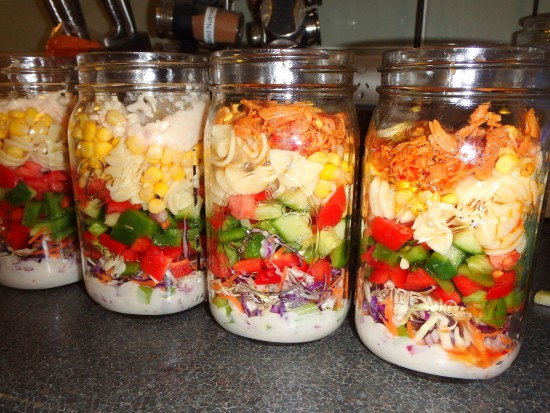 At this stage we add some cooked meat tossed in a separate dressing.  You can add chicken, salmon, prawns, crab meat or if a vegetarian, you can add chickpeas, lentils, or beans. 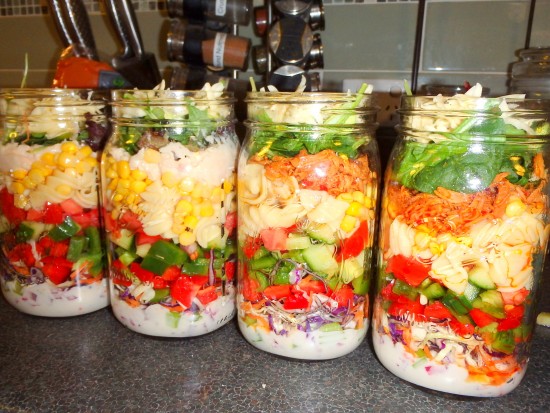 Once the jar is fully packed, screw on the lid tightly and store in the fridge until required.  They will last up to a week like this and still maintain its freshness.  No limp leaves or soggy capsicum!  I have no issues when transporting this meal to work in my backpack.

To use it all you do is turn it over top to bottom a few times to mix through the salad dressing, then pour out onto a large plate and eat.  Brilliantly simple in its execution!

Kim estimates that by using a light dressing the total energy for this balanced meal is around 550 calories (2300 Kj).  Pretty good, and these meal are already helping me to shift my excess winter weight as well as extra walking.

What do you think?  Will you or have you given salad in a jar a try?

I love all the bread made by my talented wife Kim, and her Pepita Bread is no exception.  The Pepitas (aka Pumpkin seeds) have an amazing flavour and crunch that makes this bread something quite special. 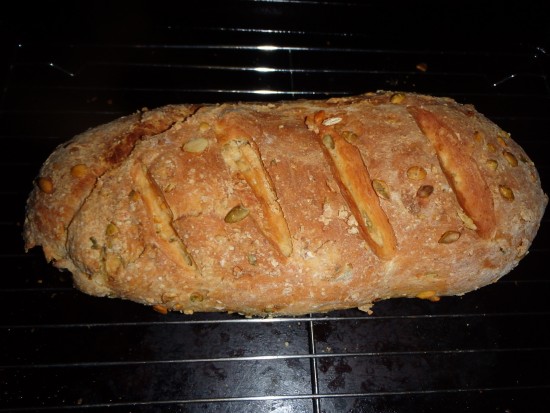 Kim and I use our trusty bread maker to knead the dough, but always shape it and bake it in the oven.  This is because we have more control over the baking process and can make it into any shape we desire.  It also saves time.

We love making our own bread because the beauty is that you know exactly what goes into it.  Something much better than a commercial loaf with a list of ingredients as long as your arm!

For those of you who want to give it a crack, Kim has kindly let me share the recipe with all of you today. 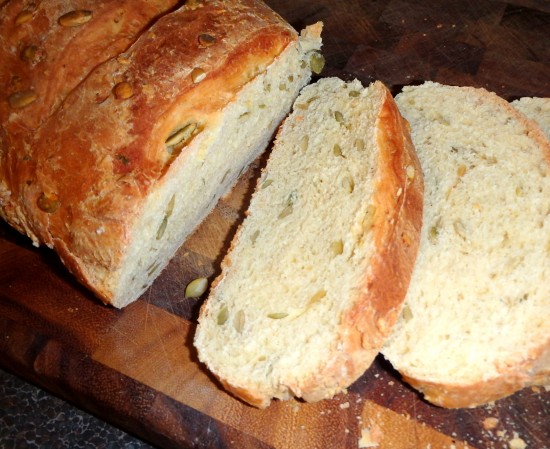 I hope you enjoy this bread as much as I do!  It even tastes amazing toasted because the pepitas roast a little bit more which enhances the flavour.

The smell of fresh bread baking in the oven is one I never tire of.

Over the last couple of years, I have been offering advice via email about building clay ovens to anyone who asked or wanted clarification about particular instructions within my eBook “Build Your Own Backyard Clay Oven“.  I did this because I love to share my sustainable living projects, and also want them to enjoy the social aspects of having a pizza party and having like-minded friends share the clay oven love!

One of those potential clay oven builders that I’ve been helping has been Tom Brandt who lives in St Albans, United Kingdom.  Once he finished his project and had cooked his first pizza, I asked him if he would like to share his story. 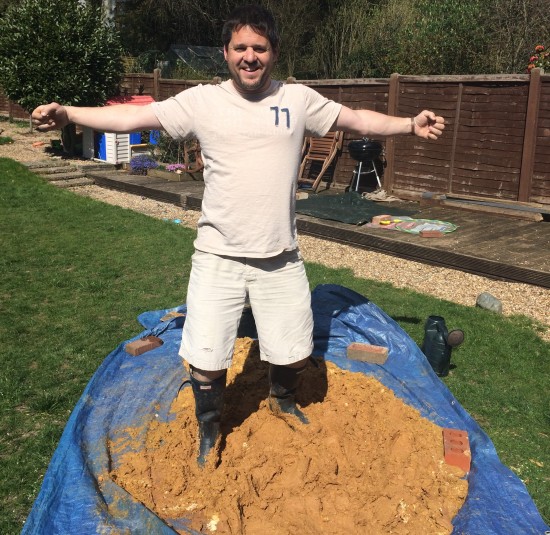 Tom agreed without hesitation, so without further ado, here is his story.

Having just moved to a larger house with a big garden, and keen to begin a project with my children building something, I happened to watch a Jamie Oliver cookery show in which he was extolling the virtues of cooking in an outdoor oven. 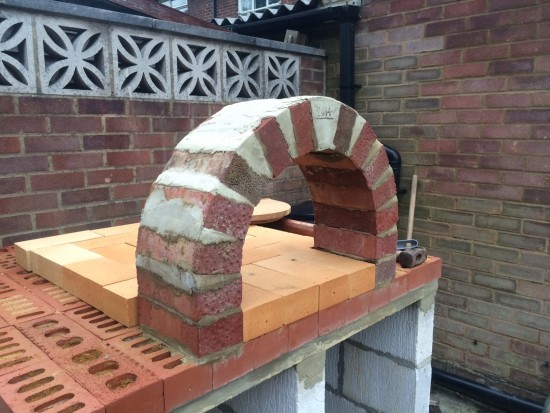 It just so happened that he was also selling the same oven the as he was cooking in for approx. £1300 (approx $2730 Aussie dollars) which I felt was an extortionate amount of money for materials you could just dig out of the ground! As I did more research online I found Gavin’s Youtube film which I viewed on several occasions before purchasing his excellent e-book. 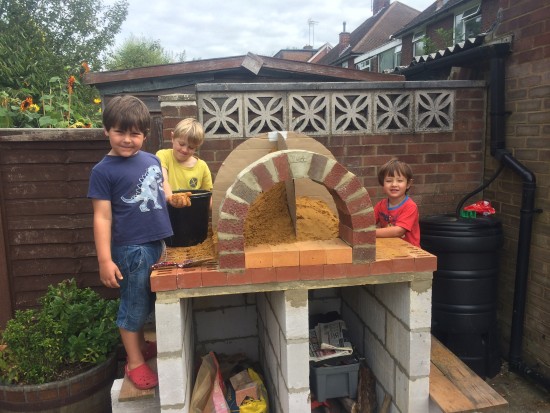 The kids helping with the sand dome

So I set about our pizza oven project in May 2014 with the aim of sourcing all of my materials for free where possible. I began by looking through local skips, asking friends for old ‘odds and ends’ they may have left over in their gardens/garages and got friendly with the site foreman at my School which just happened to be going through a major building project. I also stumbled across an uprooted tree in a field local to my In-laws which gave me a ready supply of clay. 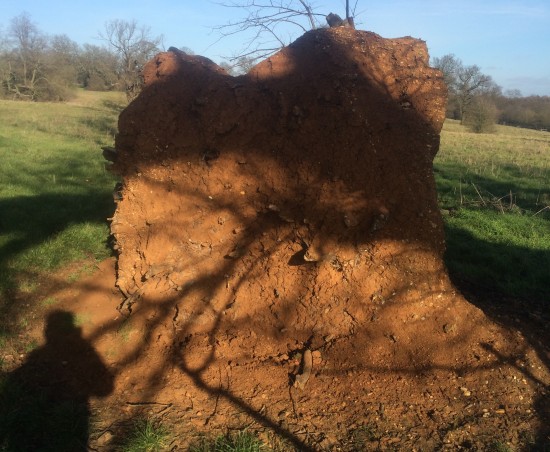 Over the course of the early summer months I managed to complete the block work with help from my three young sons before the long summer holidays allowed me to concentrate on building the oven itself, when time allowed. Again, the boys, aged 8,6 and 3 enjoyed helping whether it was creating the inner sand mound, stomping on the cob or applying the cob to the various layers. 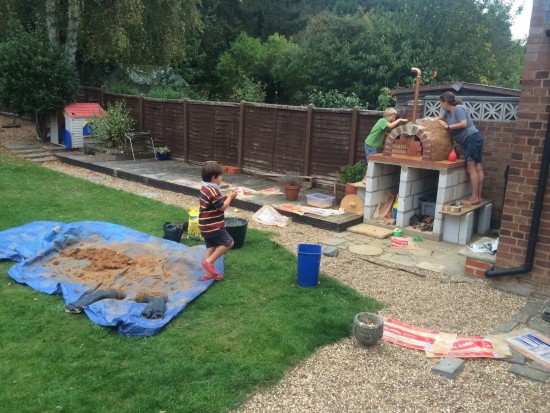 A busy family life and some poor weather dictated that, by the start of the English winter, I knew it would not be finished. I consulted with Gavin and after his advice, I decided to mothball the project until the following spring. 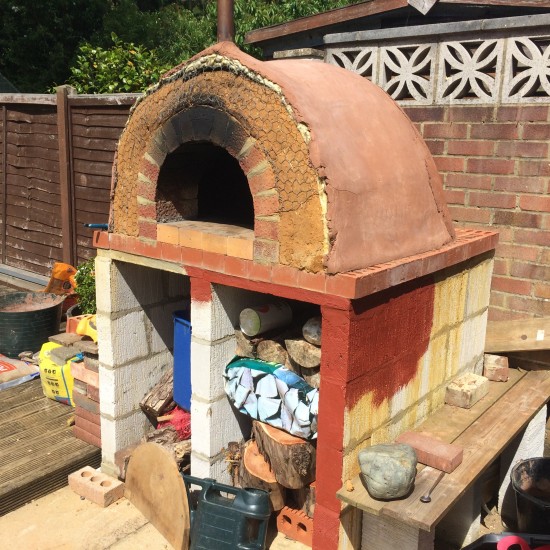 It was only in April 2015 when I finally got around to completing the last thermal mass cob layer and with sufficient drying time, a small fire allowed the first garlic bread pizza to be cooked. 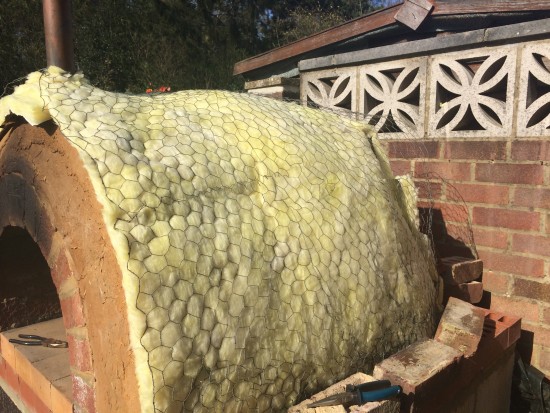 After that, an additional layer of thin loft insulation, a chicken wire mesh and the final coat of render have been applied.

In May we welcomed our first guests to enjoy pizzas with us and we have had a steady stream since! 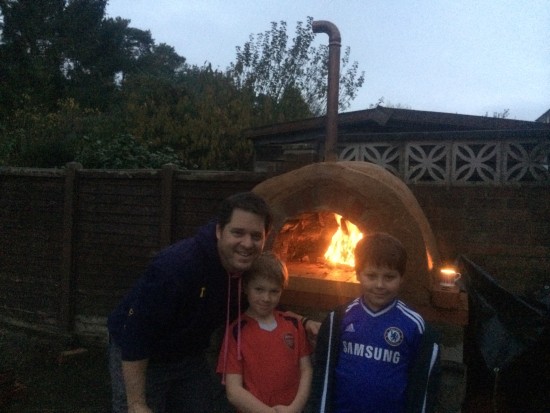 Tom with his boys

We are still learning and improving each time and are planning to cater for 20 at the beginning of August. This project has been much talked about amongst our groups of friends with many keen to be updated on progress and looking forward to their first pizza! An added bonus of creating a project I feel proud of is the wonderful social gatherings that have resulted from it. 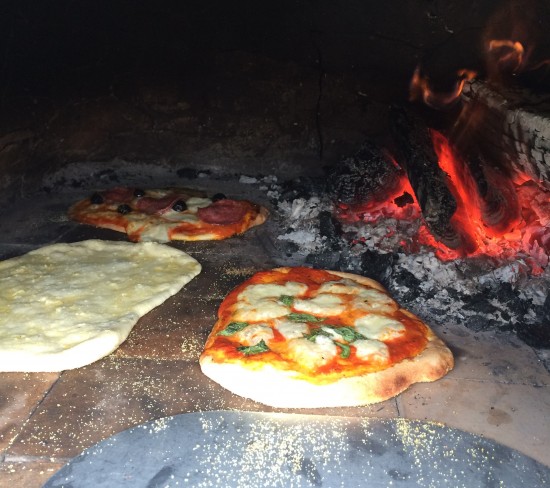 Pizza in the oven

Obviously, there have been some costs involved and Ebay and the local builders merchants have supplied everything else needed. In total, I reckon I have brought the whole project in for under £150 which is 12% of Mr Oliver’s retail price.

Not bad really for something that I have enjoyed tremendously and I couldn’t have done it without Gavin’s excellent guidance and support throughout.

Thanks Tom for the kind words and the great story!  You certainly saved a ton of money by making it yourself as well as the exclusive bragging rights of being in self-built backyard clay oven club.