So friends, after a week off from blogging and just about everything else except work, I feel much more grounded.  I am relaxed and my mind is a lot clearer now.  It is amazing what a little bit of nothingness can do for your mind!

The main thing that helped out was a big session of gardening last Sunday.  I worked hard to get everything done before sunset to fit everything in.

First I tackled the onion patch. 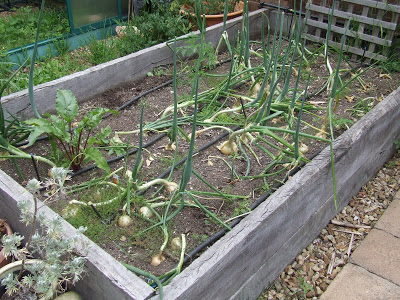 I pulled out all of the brown onions from this bed and the red onions from the leek bed and put them in my greenhouse to dry out. 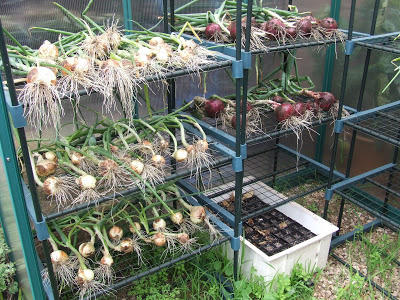 I am leaving the doors and roof hatch open to make sure that they don’t cook. 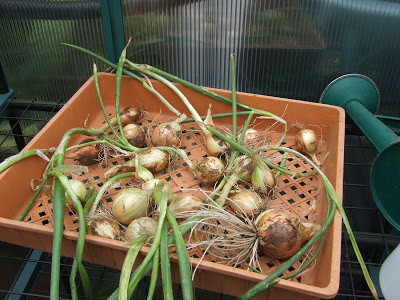 In this little basket are the onions that will be pickled as they are just a little too small. 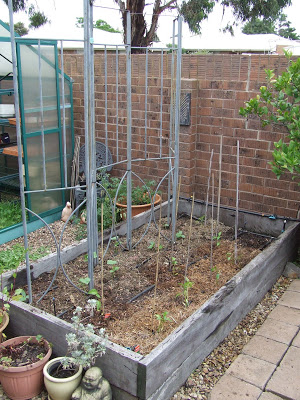 So after much preparation by digging in dolomite lime, compost, rooster booster, and a few handfulls of blood and bone, I planted into the bed. 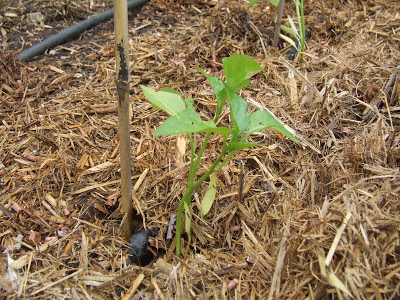 I put in green and yellow long capsicums. 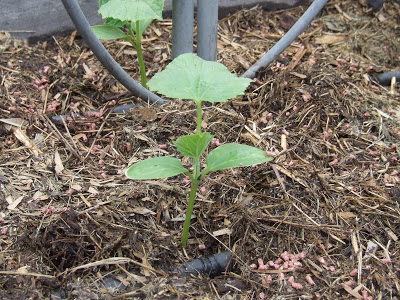 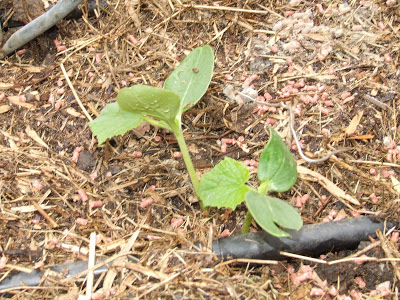 Some burpless cucumbers (acid free).  Both kinds of cucumbers will be trained up the trellis. 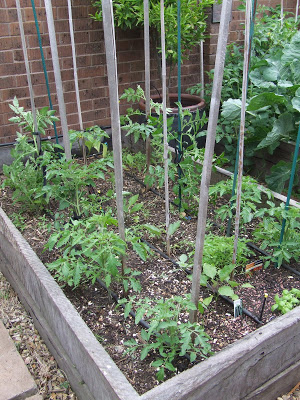 Then I worked on the tomato and eggplant patch.  I made sure that all of the tomatoes that I transplanted the week before were tied up as they had grown quite a bit in a week. 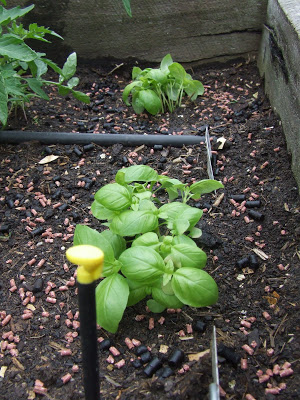 I then planted some basil seedlings which will compliment the tomatoes 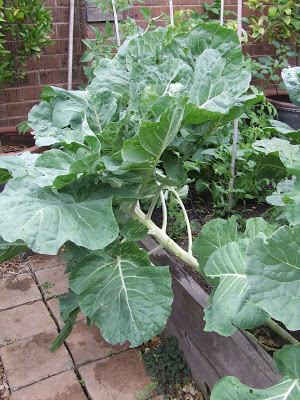 The Kale is growing massive.  We keep on pulling off the lower leaves and feeding them to the chooks.  They just love them.  I will keep them going until the cabbage moths start to decimate them. 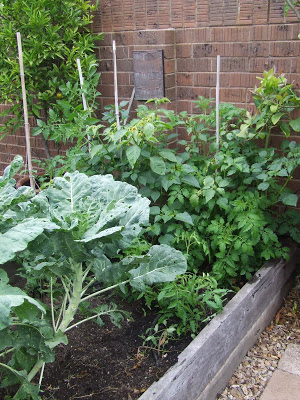 Also in the kale bed are self sown tomatoes and tomatillos, which I have just staked up and kept moist.  Should be a big crop from this lot. 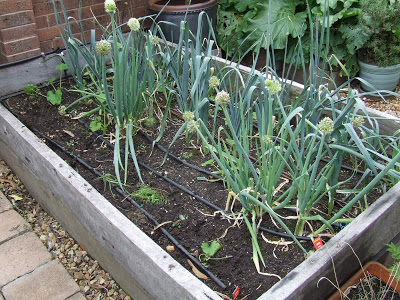 The leek bed is nearly ready to harvest.  I will do that tomorrow night so that Kim can cook up some Anglesey Eggs! 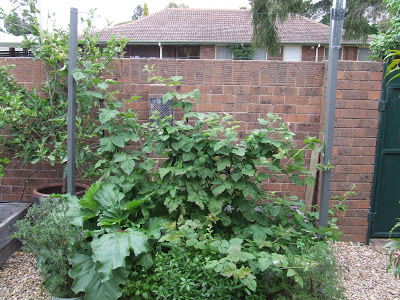 This is my rhubarb and loganberry patch.  All are growing well and we have eaten a few logan berries already.  Somewhere under that foliage are some strawberries!  Kim managed to find a few the other day that were very tasty! 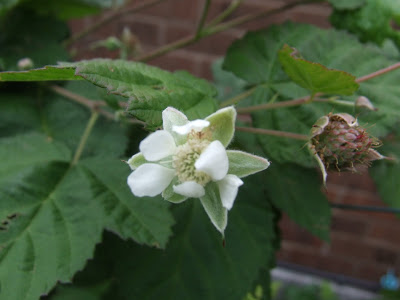 And for those who love flowers, this is a loganberry.  Very pretty. 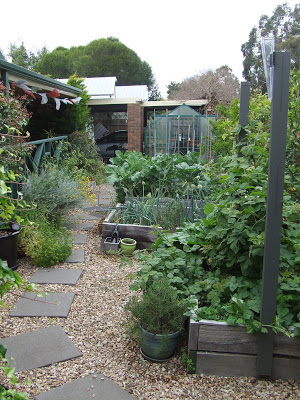 With 19mm of rain last night, the garden looks fantastic. 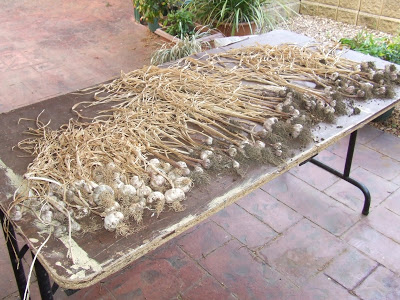 Before Pam left for Bangkok, she helped Kim pull out the garlic harvest, and they set it out to dry on a table for me.  The crop was not as large as last year, probably because of the warm spring we have had. 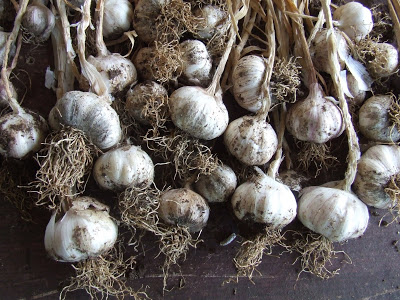 They are dry now, all I have to do is either plat them or cut the dry stalks off and store them in our pantry.  We have already started to use them in cooking and the flavour is so wonderful. 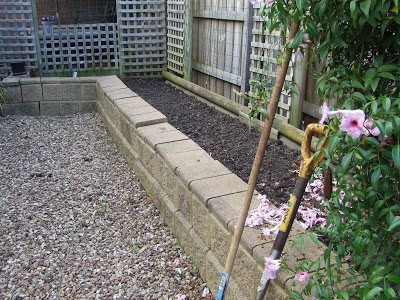 On Tuesday night I prepared the garden bed that the garlic had been living in.  More compost, rooster booster, and a bucket of pulverised sheep manure were dug in and watered in.  I will plant the three sisters in this bed, sweetcorn, pumpkins, and climbing beans (lazy housewife and scarlet runner).  The corn and pumpkin will go in first and once the corn is about a foot high, I will put the beans in around them.  The beans will use the corn as support, and the pumpkin acts as a living mulch to keep the soil from drying out, or so the theory goes. 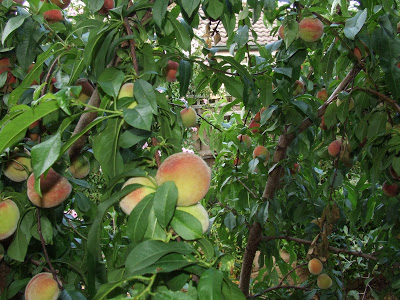 To cap it off, Kim and I were eating home grown peaches today.  They are so yummy that the juice just runs down your hand as soon as you pick them.  These are the ANZAC variety.

Did I mention at the start of the post that I felt relaxed?  I suppose that one man’s work is another man’s pleasure!  I feel much, much better.