Friday night we received a delivery of two 15kg buckets of cherries that were orchard seconds.  Our friends Jan and Michelle know a cherry grower and take the rejects and distribute them among friends and family.

Feeling quite tired from the working week, we decided to make a start on them early on Saturday morning. 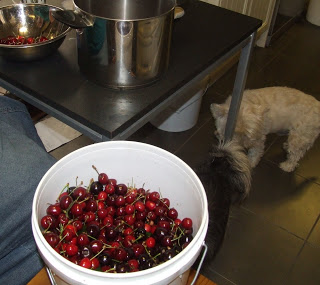 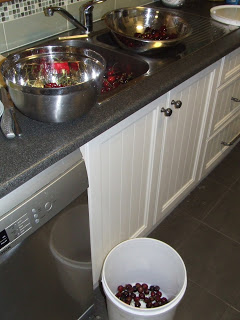 This is my setup at the kitchen sink.  I preferred to stand when I work.  My rejects went into the big bucket on the floor. 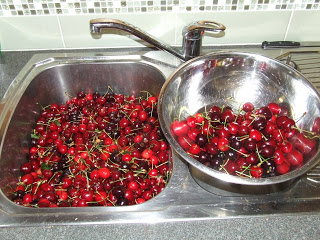 One bucket filled up the entire sink.  To stop bruising, I partially filled the sink with water. 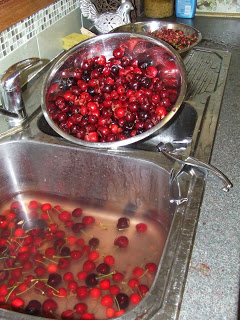 Once sorted, I started to pit the cherries with my trusty cherry/olive pitter.  You can just make it out on the edge of the sink.  We ended up with about 20kg of cherries, and the rest went into the compost bin, and a few went to the chooks. 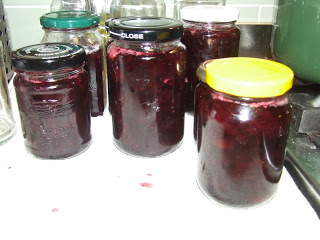 I decided to only make two batches of cherry jam, so that left so many cherries that had to be processed.  Out of the two batches I made about 6kg (12 small/medium jars) of jam to be kept and given away as gifts. 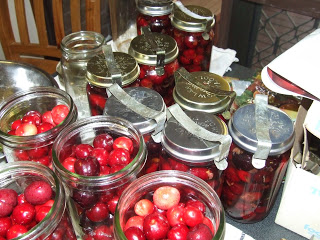 So many cherries.  In Australia we have a local company called Fowlers-Vacola who make preserving equipment.  A few years back I bought a kit off of ebay which came with the pot and lots of jars.  My sister also sent some jars down to me using my Dad as a courier (thanks Sis).

I managed to fill eight jars (No.28) with pitted cherries, and six jars (No.31) with whole cherries.  Processing is quite simple and is as easy as following a few instructions.  The jars need to be sterilized firstly.  I wash them and then turn them upside down on a baking tray and pop them in a 120C oven for 15 minutes.  Once the jars are cool put the rubber rings around the top, fill them with fruit allowing about half an inch headroom.  A quick way to make a preserving liquid is to add 1 tablespoon of sugar to the No.28 jars, and 2 tablespoons of sugar to the No.31 jars.  Then fill with cool water to the top of the fruit.  Pop on the lids and put the clips on. 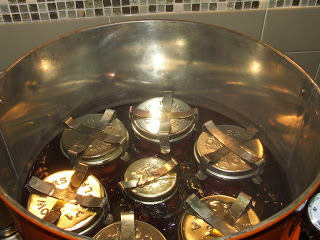 Then you get out the preserving pot and put the jars in, then fill up with water about an 5cm below the thermometer hole so that it doesn’t spill out the hole. 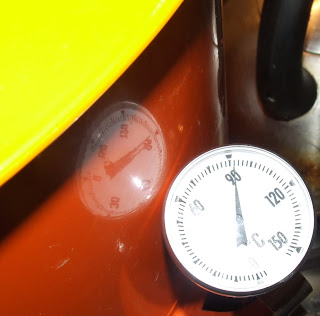 It takes about 45 minutes to get up to 92C, which you then leave at for another 45 minutes.  Try not to boil the water.  My old fowlers-vacola thermometer broke ages ago, so I now use one that I use for cheesemaking.  It works just as well. 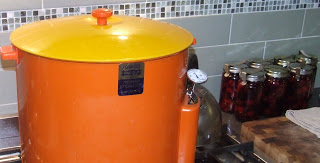 Here is the pot with the next batch ready to go in. 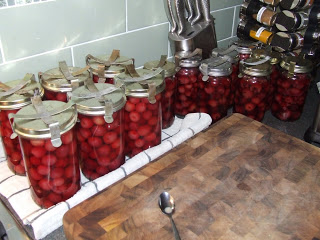 Kim and I started sorting the cherries at 0830, and I finished the final batch of preserves at 1830.  What a long day but well worth all of the yummy cherries.  All we have to do now is label all the jars and then store them in the pantry for that rainy day in Autumn when cherries will be a distant memory.  We will be well stocked with cherries until next season.

I especially love the cherry jam.  It is to die for.