I love this time of year.  The weather has cooled down to the low 20’s, but the ground is still a nice warm 18C.  Just right for planting the winter crop.  Top cap it off, my fatigue is abating, and the anti-biotics are starting to finally work.

As the moon is just right for root crops, I have been busy in the garden putting in about 50 cloves of garlic, about 50 beetroot, both Detroit Red Globe and Chioggia.  I also planted Elephant leek, Hunter River brown onions, and red onions into punnets.  I will plant them out in about 4 weeks time.

However, before I could put anything into the beds, I had to prep them first.  Two weeks ago, I removed all the spent tomatoes, zucchini, and eggplants and just left the beds for a week to rest.  Then I applied blood and bone, and some dolomite lime and watered it in.  Then this week, I removed the mulch from the summer crop and put it in the compost bins to rot down.  After a light rake to level the soil, and not wanting to disturb the soil much more than that, I started to build the irrigation system for each bed.  This took me quite a while because I had to ensure even coverage with drippers, but could not achieve this with out putting in a few micro-sprays that seem to work okay under low pressure.

Once I had confirmed that the entire bed had adequate irrigation, I got out my trusty dibber made from the end of an old broom handle, and made a hole about 7cm deep next to every drip head.  I had kept the largest bulbs of garlic from my last harvest, and pulled off the largest cloves and planted them pointy end up into each hole.  I backfilled and watered well.  They should show their green tips in about a week, if last year is anything to go by.  Here is the finished bed.  You will notice that I have used bits of irrigation system that I had on hand.  Whatever works I reckon. 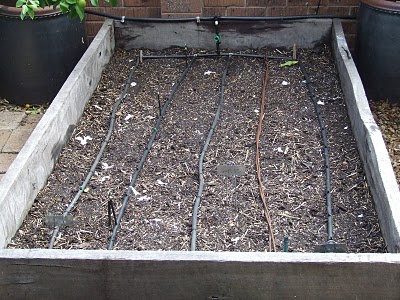 The irrigation for the beetroot bed was much easier after the first practice, and I planted two rows of each type into the bed.  I left a bit of space for some of the leeks that I will plant right next to the drip heads.  Hopefully I will get a bigger crop than last year!  There were already some leeks sprouting from last year so I transplanted them next to a dripper.  They should do alright, as I did the same thing last year and got some massive leeks. 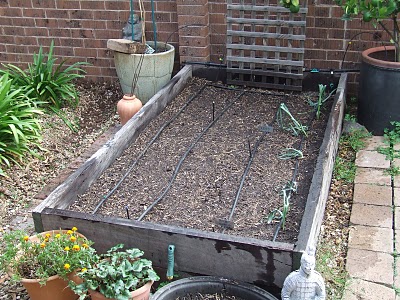 Here is the rest of the garden.  First, bed #4 that still has some large spring onions, celery and cayenne peppers growing in it.  We are slowly harvesting the celery and the spring onions, and I am waiting for the peppers to ripen.  This bed will have broad beans planted in it towards the end of the month. 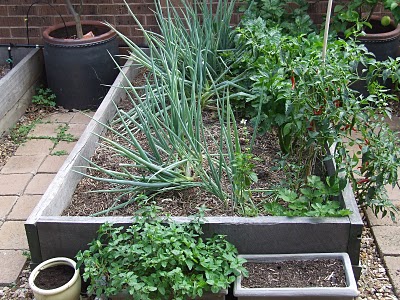 The final bed is laid fallow at the moment, waiting for the onions and leeks that I planted in punnets.  I will have to fix up the irrigation in this bed before I put in the seedlings.  Note the seedlings in front of the bed, and the plate of peppers drying in the sun! 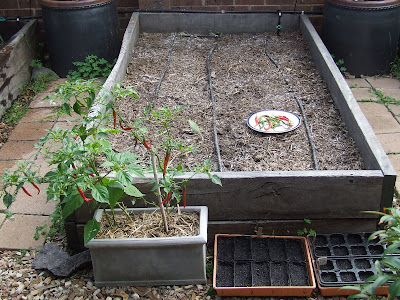 Here is the view of the garden looking towards the front of the house.  Lots of herbs in pots. 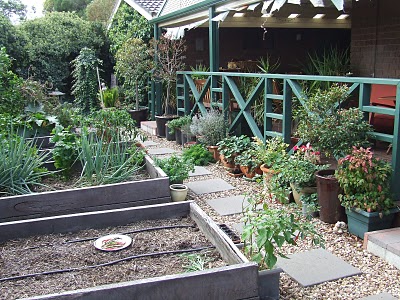 Once I had planted everything I need to, I noticed that the pumpkin vines were beginning to die off, so I decided to harvest the remaining pumpkins.  Firstly, two butternuts that grew from compost that I had spread in the bed I just prepared for the garlic. 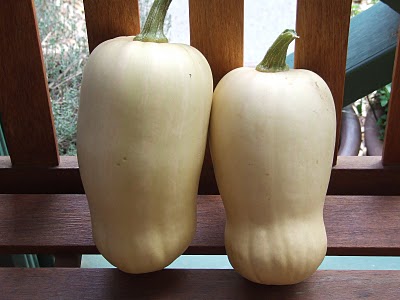 On the other side of the house the large pumpkin patch had come to an end, so I harvested these beauties. 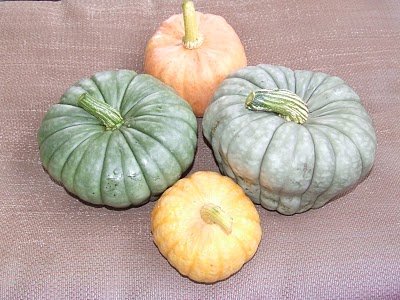 Two Queensland Blue and two Australian Butter pumpkins.  That makes a grand total of 12 pumpkins for the season.  We certainly will not be short of pumpkin soup or roast pumpkin this year.  Think of all those yummy pumpkin seeds ready for roasting as well!

Now all the while that I was in the garden, Kim was whipping up a treat.  It wouldn’t be Good Friday without the traditional hot cross buns, so she made a batch of 16 buns.  The glace is made from cinnamon, mixed spice, icing sugar and water. 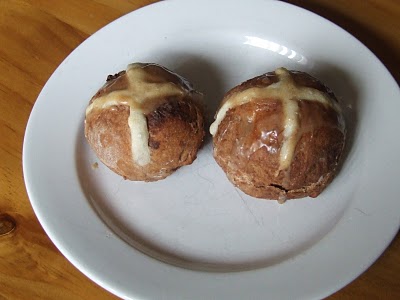 Being very hungry, I ate three with butter while they were still piping hot! Delicious.  What a great treat after a hard days work.

Over the course of the Easter break, we are erecting a 6′ x 8′ greenhouse.  There will be a post about it on Monday.  We should be well knackered by then!