Today around our nation the people of Australia (well some of us) spoke loud and with a single voice to let our politicians know that we care about their lack of solid action regarding Climate Change. We were willing to give up our time to demonstrate that we want strong emission targets followed up with quick and decisive action to combat Climate Change.

So here is my own little story about the day.

I picked up the first part of my band of eco-warriors at 0910 in Ballarat, finding that Amy and Jamie were very eager to get going. On the way home to my house I found that Winslow (the nickname Amy gave my Civic Hybrid) attained a record 4.1 L/100km. I was gob-smacked at the fuel consumption. Well done car!

Once we arrived home, we had found that Kim had been busy making us all a home made pizza. She even made the dough from scratch. She wrapped the slices up for lunch and also popped in an apple and a piece of rice bubble slice for each of us to eat when we got to the city. The two young ladies managed to convince Ben to walk with us, so now we were four. The more the merrier. Kim told me yesterday that she wanted to come along a walk as well, but that she probably was not physically able at the moment. We both agreed that it was probably the best thing that she just relax today and join us next time. Even Megan wanted to go, but had a prior engagement that she couldn’t break.

We left for Melbourne at about 1045. I had to get fuel for the car, and I found that the car achieved another record. From 40 litres of unleaded fuel, I managed to travel 804.5 Km! Got to love this technology. Anyway, the trip was uneventful and the traffic was light, and it only took 35 minutes to get to the Crown Casino, where we managed to get parked for $6 all day. Just compare that to my trip into work yesterday that took me 1h 45min in very heavy traffic and I left home at 0630. Bloody ridiculous yesterday, but a nice trip today. 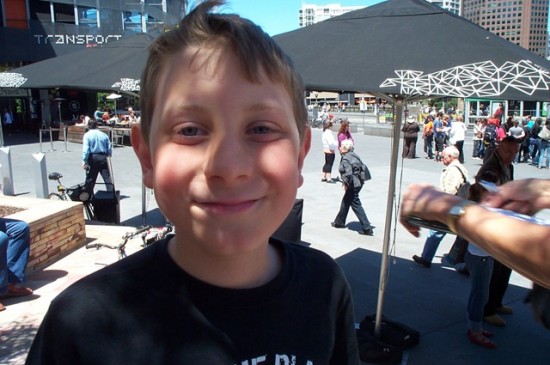 We walked up to Finders St Station where we met Lydia and Matt under the clocks and popped over to Federation Square where we had our lunch. Here is a shot of Matt, Lydia and Ben just after lunch. 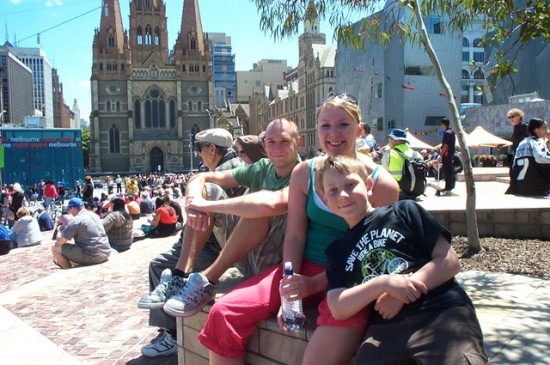 And here is one of Amy munching an apple and Jamie looking very happy. 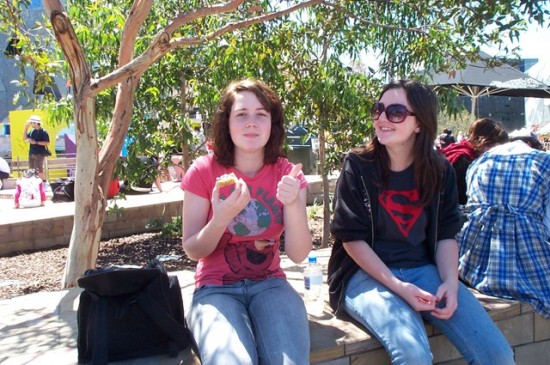 After lunch we walked over to the stage and giant screen where a Brazilian band was performing. They got the crowd clapping and dancing, which was pretty cool. 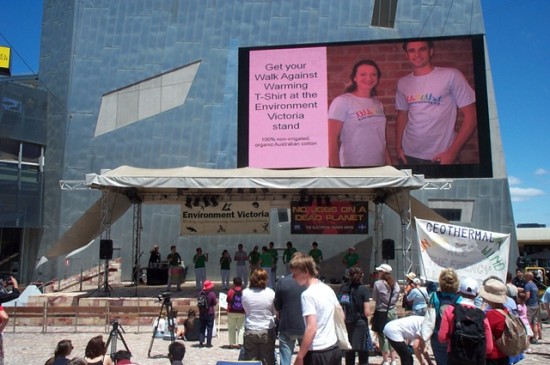 After the band had been playing for about 20 minutes, quite a gathering started to occur. At around about 1310, the presenters began to speak about what I usually write about in this blog, and one Professor was down right depressing. I can’t remember his name, but he told it how it was, that we are already committed to a 2 degree rise in global temperature and that we could not stop the initial stages of Climate Change. So, we had to act before we reached the first tipping point, which could be either arctic ice gone at the North Pole, or Methane release from the frozen tundra, or ice-sheets melting in Greenland and West Antarctica. After his speech there was the usual call for action and we all got revved up and excited.

Here is Ben and I enjoying the speeches. 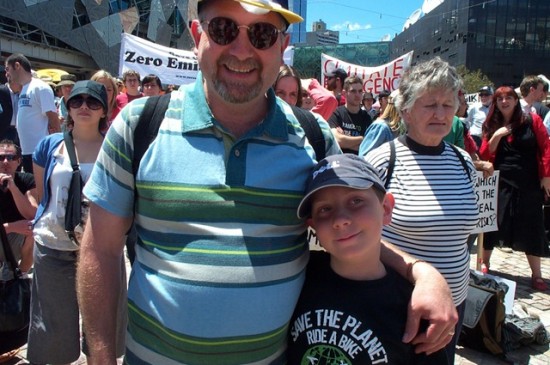 Once the call to arms was over, we all headed off down Flinders Street and then left into Spring Street towards Parliament House. I wouldn’t even be able to guess how many people were walking, more than 25,000 would be a good approximation. 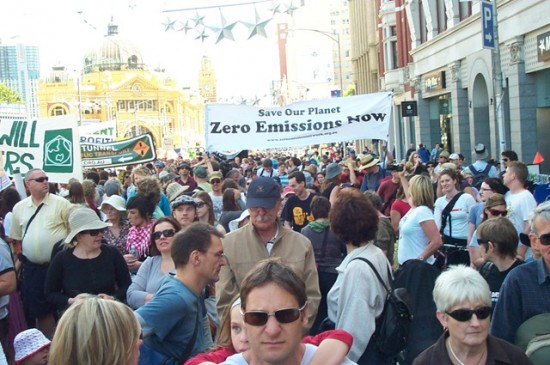 There was about 700 metres of people in front of us, and about 1500 metres of walkers behind us.
As you can see from the faces, there was a very broad span of ages from babies and toddlers in prams to Grandpas and Grandmas all walking together with one purpose of getting our elected officials to act on Climate Change.

Now here are a few things we saw and did along the way. We saw Turtles who were against Climate Change. 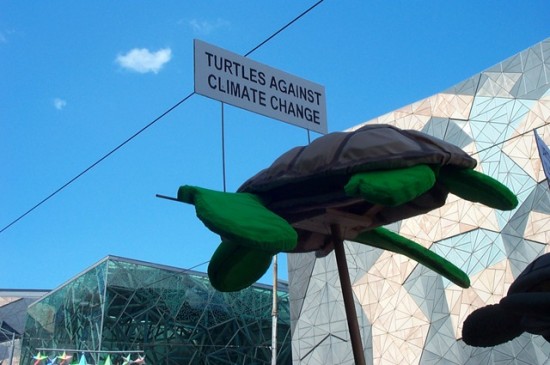 We saw dancing in the streets by Jamie, Amy and Ben to the Brazilian drum music. 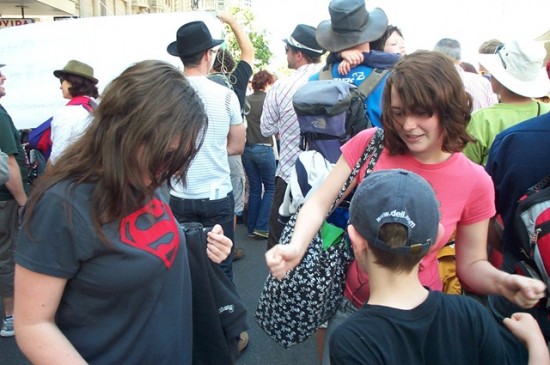 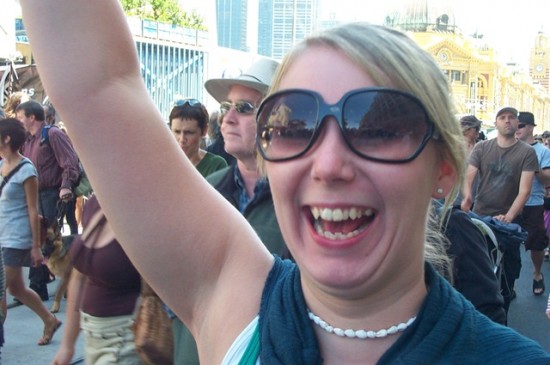 We saw what the hole in the Ozone layer does to heads that don’t wear hats! That has to hurt tomorrow. 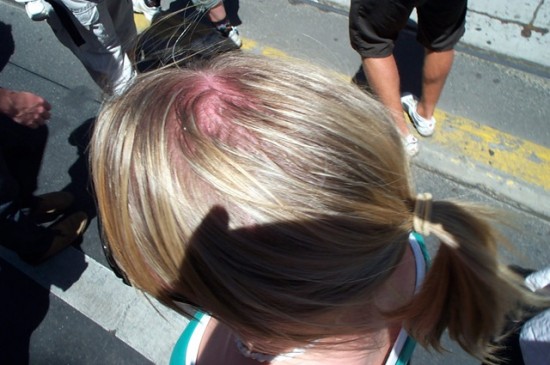 And we saw a small cute boy with a solar powered fan in his hat. 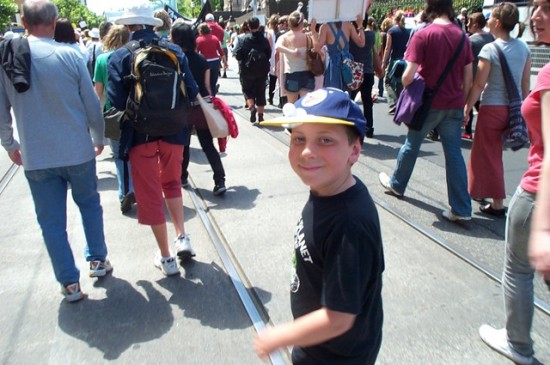 As we approached the steps of Parliament, I notice that there was a mounted police presence which was just a bit over the top. What were we going to do? Rush the empty halls of government and ransack the place? I don’t think so. This was the most peaceful protest I have ever seen.

Once we got there, we all gathered and chanted that we wanted action now and when the tail end Charlie of the walk caught up, we counted down from 10 to 1 very loudly and basically raised the roof off of the building. Hopefully some of our elected officials heard us in their beach houses down the coast (that won’t be worth much when sea levels rise), and got the message. Hopefully on Monday, we may see a bit more action.

After the fun and games were over, we all dispersed peacefully and we all said goodbye to each other. Amy and Jamie headed off to Southern Cross Station, and Matt and Lydia had to go to St Kilda to meet some friends. I thanked them all very much for making an old mans day very fulfilling.
Ben and I walked back to Flinders St, caught a tram down to Spencer St and walked the rest of the way to the Casino Car park. For being such a good lad, I bought Ben a chocolate ice-cream cone. It is not often that most of the family get involved in something that we all stand up for and believe strongly in. It was a great day, and I thank everyone again for being part of a great event.
Maybe we won’t have to walk again next year because we, as a nation, will have begun to reduce our emissions in a dramatic way, but I am not holding my breath!