In a few weeks, our car is seven years old. Happy Birthday car!

However folks, it is not your ordinary internal combustion engine car, but a hybrid/electric car.  Just one of those crazy, unthought through decisions one made in the very early years of greening.

If you have read the free eBook, “The Greening of Gavin“, you would no doubt have read about how I came to lease this car only a week or two after my green epiphany.  It was a huge statement of sorts that I was serious about greening my lifestyle, however in hindsight, I probably would not have rushed into such a purchase, and just lowered car usage instead.

So, now that I own the Honda Civic Hybrid (2006), and have driven it for just shy of seven years, what is the verdict?  How has it performed?  Did anything major go wrong with it?  Would I buy another hybrid? 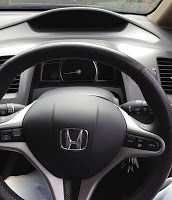 On average I get about 5.2 litres per 100km, just under 800km to a 40 litre tank refill.  The petrol tank holds 50 litres, but I have never chanced my luck, and always filled it as soon as the warning light appeared on the dash.  So the fuel economy is very good.  That means that technically, for just $60 of fuel (current price $1.60 per litre), I could drive from Melton to Adelaide, or to Sydney if I chose to.  With a full carload, it would be cheaper than flying and take around 7 hours.  A lot less greenhouse gas emissions as well, even compared to a normal family sedan or SUV.  I also offset the small amount of GHG emissions via GreenFleet.  It make a whole lot of sense to me. 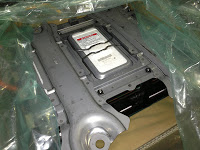 Well, I would love to say that nothing went wrong, but I can’t, because it did.  The Hybrid Battery failed.  However this only occurred during the last two weeks, and thankfully was covered by a warranty.  My local Honda dealership diagnosed the fault, and ordered in the new Integrated Motor Assist (IMA) battery pack at no cost to me.

It doesn’t look like much, just a metal box with lots of Nickel Metal Hydrate cells packed into it.  The dealership told me that it would be sent back to Japan to be recycled into a new battery pack.  At least it wasn’t going to landfill.

Fortunately, the hybrid battery has been the only fault for the entire 7 years with  just over 98,500 km travelled.  The battery fault did not put a dampener on my ownership, and it was picked up early as I ensure the car is serviced as per the plan.

However, I would highly recommend that if you do purchase a hybrid or even an electric car for that matter, ensure you fully understand the warranty period for the battery bank to understand possible replacement costs if you intend on owning the vehicle for a long time.

Would I buy another hybrid?

Maybe, as hybrid technology has advanced in the seven years since I bought mine.  On the other hand, probably not.  If forced to purchase a replacement for the one I already own, I would probably buy an electric car if it was not too expensive (but they currently are).  I want to break reliance on fossil fuels with my next purchase.  I could charge it very cheaply from my solar PV system, but would have to add a few more panels to balance the costs.

Alternatively, and it depends on Kim’s health, I would love to get rid of reliance on cars altogether.  Yes, no car ownership would be my ultimate dream.  Maybe if I had a Flintstone car, we would still get around! 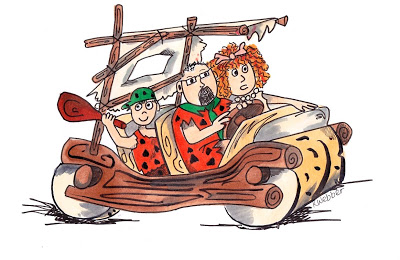 Better still, Ben and I are still riding our bikes, so with more practice, and a trailer, it could be a viable alternative.

Anyway, that is my experience of owning a hybrid car.  With cheap fuel bills, and low emissions, what is not to like about a hybrid (besides the battery fault)?

What do you think?  Would you buy or have already bought this type of car?  What is your experience?

This recording will either work, or be the worst podcast I have ever recorded.  This episode is a recording that I made on the journey home from Melbourne to Melton.


Listen to the Episode Below (00:42:33)
Download Listen in a New Window iTunes Stitcher SoundCloud Leave a Review Clammr It Subscribe via RSS Subscribe on Android RSS Patreon
I hope you enjoy it, and even if you don’t, please leave me some feedback via comment so that I can improve this type of roving recording in the future.
Also, on the media front, this article titled “Worldwide Webber a hit was published in the Melton Weekly.  Corny title, I know, but a nice read.  I think the media frenzy is now coming to an end, so on with our regular posts from now on!
If you enjoyed the podcast, please pop over to iTunes and rate it and leave a review. You can also do the same within Stitcher Radio if you use that service.  It would help me out so much, and elevate the ratings so that others can find out about the podcast and learn about sustainable living in the ‘burbs.

Sorry for yesterday’s big dose of cynicism, and I promise I will up the mood today!

Why is it that every time I see another Hybrid car on the road, I smile and have this overwhelming urge to wave at the other driver? Maybe it is because I think the other Hybrid driver represents an individual who cares about their driving needs and behaves like I do. I associate the mere fact that this other car exists and that someone made a conscious decision to purchase it with a warm fuzzy feeling. This observation fills me with hope.

Sure, some of these cars are purchased by large companies as fleet vehicles to enhance their green credibility, however some may buy them because they actually care. But for an individual acting of their own accord and making the investment in a low emissions vehicle, this speaks volumes to me in the way of sound choice and hope for the future.

I also read that the city of Melbourne will be getting some Hybrid Buses to introduce into the public transport system which is a big step in the right direction. You can read about it here.

Also, I have observed when walking around the city at lunch time, that there are quite a few trams with signs all over them telling the general public that it is powered by 100% wind power. I expect that Yarra Trams, the consortium who operates the tram system on behalf of the state government, purchases certified GreenPower for the year that equates to the average daily electricity usage of that tram. Pretty cool, but I think this may end up sending a false message to the users of the public transport system. This is mainly because the rest of Melbourne’s public transport system runs on electricity generated by coal fired power plants in the Latrobe Valley. This needs to green up substantially. I bet if I questioned fellow passengers as to whether they thought the transport was non-polluting and good for the environment, I would get so many different answers but the majority would probably most would say yes. This is because they don’t actually see the emissions from the tram or train, because the emissions spewed out over 200km from the city. So until we clean up our act, we are stuck in this situation of a false reality.

Thankfully, the two cleanest ways of getting around that delight me are walking and cycling. I love to have an 45 minute walk at lunch time, mainly because it is probably the most exercise I get each day except when gardening on weekends. One certainly does not perform very many strenuous tasks as a knowledge worker in an office. I love to stroll through the city’s many gardens and observe the people around me. I smile often at people who are just enjoying their lunch time break with the simple joy of taking a walk to help prepare for the second half of their day.

I also smile every time a cyclist rides past me as I walk the 15 minutes to and from the car park each day. I have observed so many more people riding to work over the last few months, that it is genuinely encouraging to see this increasing trend. However, one thing I can’t figure out is why most cyclists consider it necessary to wear a dedicated set of very expensive cycling clothing to get from A to B. I remember when I was in my mid 20’s and visited the Netherlands, everyone there rode bikes and wore just their normal street cloths. Expensive cycling gear was only to be seen worn by athletes and Tour d’France riders. I know when I go for a ride some weekends, that I just wear decent footwear, normal clothes and a helmet. Nothing fancy, and until more people ride in normal clothing instead of driving the car for short trips, the elite, fancy dressed cyclists will rule the road. Just food for thought, that’s all.

How do you get around? Do you think it will make me smile?