After three weeks of 16-18 hours a day in bed, resting my back, I fancied a walk. In fact, I looked forward to it. I got up early, if you call 10am early, and made Ben and I some breakfast, and got ready to go out and clipped on my pedometer just to make sure I didn’t over do it. I promised Ben a walk to the new housing estate so he could play on the big rocks and hills of dirt, but my real motive was just to get some exercise and see what I could scrounge from the rubbish piles that were laying around from the road and services construction for the continuing construction of our chook house.

As the housing estate is only at the end of our street, it wasn’t far and we soon started our adventure, as Ben called it. We walked past about 10 new houses that were not standing last month, in various stages of construction. As I am an honest womble, and don’t steal stuff, from construction sites, we walked straight past them all and off to the new roads that were in the process of being constructed. There was stuff laying everywhere e.g., telco PVC piping and electrical conduit that is pre-installed before the house lots are sold. Some of those building contractors are so messy.

We had to walk for about 20 minutes before we got to the big rock piles that Ben likes to climb, and it was even bigger than I remembered from last walk. The ground around here has volcanic basalt about 5 metres down, with clay on top of that, with about 1-2 cm of decent topsoil. I pity the poor homeowner who thinks about starting a garden straight away, because all the housing lots have had the top soil removed by the road contractors and developers. What a crime! All the topsoil, which is hard enough to come by anyway, has to be brought back in to grow anything, usually at an extra cost to the homeowner.

After the rock climb, we found a rubbish pile about 50 metres away, and started to find some useful stuff. I needed some edging to dig in around the bottom of the chook cage. This is what I found. 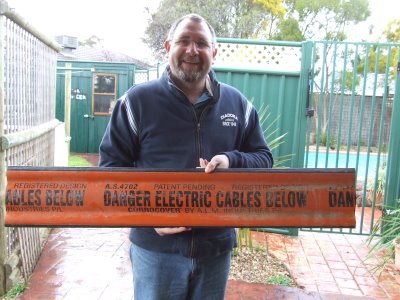 With this being the reverse side, which I will use. As the chooks can’t read, I don’t think they will mind the bright orange side facing inwards. 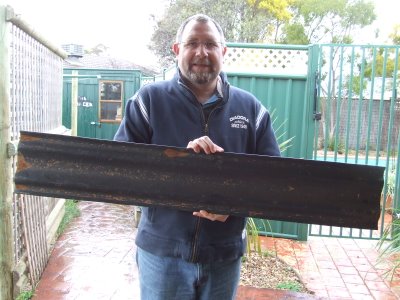 It should screw onto the frame quite easily with self tapping screws but I will dig it down a bit first so the chickens can’t dig under it. It is about 5 mm PVC. We only found one of these, until we got to the big dirt hill, that looks like all of the topsoil that has been scraped off from around the estate. It is about 15 metres high, and of course Ben had to climb it. So with him occupied, I had a look around some more rubbish piles and found 5 more of the PVC electrical covers pictured above and a similar length of corrugated iron. And then I found the real treasure of the day. Six 50 litre bags of coconut planting medium, just dumped from someones landscaping effort. Normally this stuff comes in compressed blocks, but the stuff in the bags was loose. 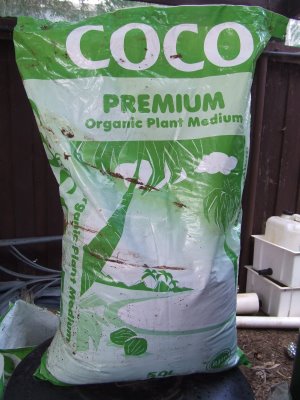 This is what the stuff looks like if you haven’t seen it before. It is shredded coconut husk, and holds water well. The compost worms love the stuff, and a compressed block actually comes with the kit as their bedding if you ever decide to buy one. It also is fantastic mixed in with compost, which is what I am going to use it for, to make a great potting mix for the seedlings that I will plant out during this month, (tomatoes, chillies, capsicum, eggplant, basically the ones with tiny seeds). 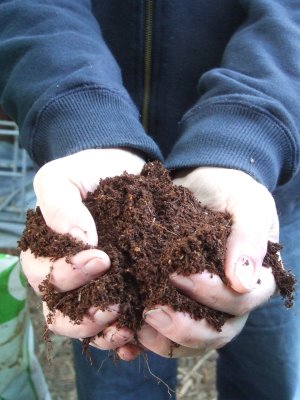 Now, I wasn’t silly enough to carry all of this wonderful booty back home, as it was about 20 minutes walk away, and I am not a back mule. So once Ben finally got to the top of the dirt hill, and managed to get a splinter in his finger, we began to walk home again, with him whinging all the way home about his sore finger. I told him not to touch it, because I could still see a little bit of it sticking out, which we could get out with some tweezers, which Kim did as soon as we got home. He was a brave boy all the way home, but had a bit of a cry when he showed his Mum. After about 10 minutes he forgot all about it as kids do.

By that time I managed to con Amy into driving back to the dirt pile where I had stashed my booty, and thankfully it was all still where I left it. Amy loaded all the heavy bags into the boot and I picked up the light PVC panels. She piled the bags near the compost bins when we arrived home, and then I raced inside to show Kim. She was very impressed and said that it was time to plant the Apricot tree in the front yard. So Amy got all the garden tools required, out of the shed, I prepared a good rich organic mix so that they could dig it into the spent soil, and Amy took the half laden wheelbarrow around to the front garden. By the time we got there, Kim had picked the ideal spot that gave the tree a bit of room to expand, being about 3 metres from the fence, without creating too many problems when it gets bigger. Here is the tree in all of its glory. 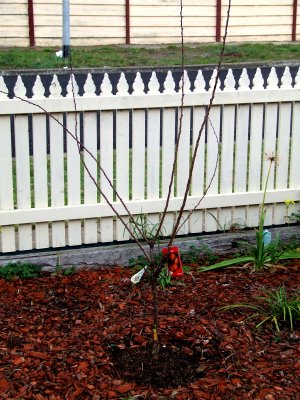 After a bit of effort on Kim and Amy’s behalf (I had to supervise, and was the most frustrated gardener ever, which Kim suggested I write a book about!), the tree was in the ground with good organic soil around it and well watered in. It probably would not need watering now until the buds on it start to burst in the Spring, as it is showering nearly every three days. We are only receiving about 0.6 mm of rain in those showers so not enough to wet the soil more than about 5 mm deep.

Our garden now has an Apricot tree (of course), an Apple tree (1 yr old), an ANZAC Dwarf Peach tree (1 yr old), a Blood Plum tree (20 yrs old), and four citrus trees (18 months old) in pots in the vege patch garden. Kim wants some Raspberries this year so I have found just the spot in the front garden up against a wall and will order them from the Diggers club. It is the only full sun area I have left, and I should be able to espalier the canes as they grow. The only other fruit tree that I want to plant is a Locut tree, of which I have 5 little seedlings that are now about 30 cm high, growing in a pot. I scrumped the seeds from a tree that overhangs from someones back yard into Ben’s school yard. I will transfer the seedlings into a bigger pot as individuals, keep the biggest two and give the rest away via our local Freecycle. They should be snapped up in a jiffy, as they hard to find in local nurseries.

Kim and Amy also cleared a garden bed of the surviving agapanthas and replanted them into one of the other beds in the front yard. We have decided to grow our sweet corn in this bed this year with some runner beans in between each corn plant. That way the runner beans will grow up the corn stalks and I won’t need to put in supports. Here is the cleared bed which is right in front of our bedroom window. That way, it will remind me to water it. As you can see, there is a down-pipe right next to it, so I will rig up some sort of water butt to help water the plants in the front yard this year. Money is tight because of the back injury, so a rainwater tank is out of the question. 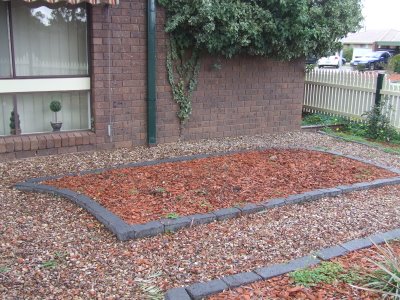 We will clear away the bark mulch and re-use it on the other garden beds to add depth for the anticipated hot summer. Then we will add some more compost, dolomite and dynamic lifter before planting the seeds and mulch with sugar cane mulch.

After all of that exciting stuff, and with a big well done going to Kim and Amy for all the hard work, it was nearly dinner time, so I whipped up some home made pizzas on some pitta breads, which we cooked at the same time as the daily loaf of bread to save on energy. A nice simple dinner with some ingredients coming from the garden. I used up the last two capsicums (bell peppers), and some rosemary that I chopped up and sprinkled sparingly over the top to give them a little herb flavour. Very nice.

What a great day, and at the end of it I checked my pedometer, and I had clocked up 6100 steps without much ill effect. That gives me hope that my back is improving quicker than I anticipated. All the rest is definitely helping. I still have another week signed off work as unfit, and will continue to rest, but one great day out of bed after three weeks is not a crime in my books. My mind is not injured, just my back, and only temporarily, even though it has taken 11 months and two relapses, to heal so far. It will get better, I can just feel it in my water!

Not a bad days effort and we all had fun, living our simple and sustainable lifestyle.