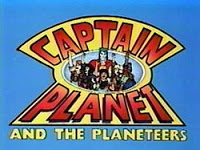 I remember when my adult kids were knee high to a grasshopper, they used to love watching a TV show called Captain Planet and the Planeteers.

I used to get up early in the mornings and watch it with them, and this was way before I ever turned a shade of green. I believed that it had a great plot every single show, and had a message at the end of the show about how to save energy, or stop pollution or some such eco tip. This series was well ahead of its time, and was created by Ted Turner who founded Cable News Network in the US (CNN). The theme song was catchy, and they are probably showing reruns on the Cartoon Network as I write this! I believe that there was a follow on series called the New Adventures of Captain Planet, but I never saw this on mainstream telly in Australia.

Wikipediea states that the basic plot was “Gaia, the spirit of the Earth, is awakened from a long sleep by human activity destroying the planet. Realizing that the damage is extensive, Gaia creates five magic rings, each with the power to control an element of nature and one controlling the extra element, heart. Gaia sends the rings to five chosen youths across the globe: Kwame, Wheeler, Linka, Gi, and Ma-Ti.”

Then if it got too hard for our heroes, they would summon Captain Planet by pointing their rings skyward and shout out their elemental words. Then, Captain Planet would kick some evil dudes butt, who was stuffing up the environment and sent them packing. My favourite evil dude was Hoggish Greedly, because he looked like a pighuman and was supposed to represent a greedy pig of course.

That’s all well and good, but where is the real Captain Planet now, when we really need him? Gaia is calling out for him and screaming at us, and all we seem to do is keep polluting our one and only home as business as usual.

If you subscribe to James Lovelock’s Gaia Theory, we are already doomed, for the the collapse of civilisation is nigh. He believes that runaway global warming has already begun and we are helpless to stop it and sea levels will rise regardless of what we do in the next 10-30 years. I personally do not hold faith in his doom and gloom scenario, but I do accept his Gaia Theory which states that Gaia is;

“a complex entity involving the Earth’s biosphere, atmosphere, oceans, and soil; the totality constituting a feedback or cybernetic system which seeks an optimal physical and chemical environment for life on this planet. ”

So, if James Lovelock’s Theory is correct and there is a Gaia, where is Captain Planet? Was he Al Gore in disguise and is still at work with his WE Campaign. I watched the 27 minute version of his speech to the american people and was moved. How can only approx 300 million of the worlds population burn 25% of the world fossil fuels and keep doing it without true leadership from the top. Even if Al and Tipper have a whopping great mansion that they live in, at least he is trying to spread the message, a bit like Gaia needs, and I can see him dressed as Captain Planet!

Or is Captain Planet the collective of average citizens of the world, who are yet to get off of our collective arses and stop being part of the problem and start being part of the solution? When did the messages that were so clearly directed at the kids who watched that show so many years ago get forgotten?

The answers were all so clear in that simple kids show, and not many of us in the world listened to it. How sad it makes me to think of the good times I had with my kids watching our weekly viewing, and even I missed the message that was loud and clear until my epiphany, two years ago. I feel like I should be slapped in the face with a big smelly fish for not listening, just like in a Monty Python skit. Hindsight is a wonderful but useless power that we humans posses.

If only……. listen to the lyrics)

THE POWER IS YOURS!