When I talk to some people about the seriousness of climate change, they tend to not take me too seriously, and I think it is mainly for these two reasons:

That’s because there’s no sense of urgency.  In the national newspapers you can read about the West Antarctic Ice Sheet breaking up and raising sea levels by 1 metre, right next to a story about the Prime Ministers Business Adviser Maurice Newman saying that Climate Change is a hoax perpetuated by the United Nations.  One is true, and the other a quack, but if you didn’t know better you would give the dire climate change story less weight.

Therefore, one very good reason for taking drastic public measures in the form of activism, street marches, protests, walk against warming etc.  in addition to just changing your life as best you can, is quite simply to create a sense of urgency in the general population.

Because right now, that sense of urgency is not there at all.  Mind you, that may change pretty soon if water gets scarce and food supplies dwindle and more beach-side properties begin to slip underwater.

The mechanism that counteracts the creation of a sense of urgency by the usual means (i.e. by articles about droughts, heat-waves, melting ice shelves etc. in the newspaper, posts in environmental blogs similar to mine, and warnings by climate scientists) is this;

A while ago, I was working at in an office tower,  when there was an audible alarm.  It sounded like it might be something serious, but I didn’t know for sure. So I looked around to see how other people reacted.

Since nobody seemed overly worried, I concluded that it was probably not a signal to leave the building, and so I continued working instead of running down the fire stairs.  Sure enough, it turned out to have been some technical glitch with the alarm system.

You see, the same happens in the larger context. When ordinary people read truly alarming stuff in the newspaper, hear it on the radio, or see it on TV, they will check around them to see how everybody else is reacting. If others don’t seem to be overly worried, they’ll shrug, decide that the alarming report was probably exaggerated, and continue about their daily business.

The only problem is in the case of climate change, we know it’s not a technical glitch, and it’s not an exaggeration, either.

They really should be worried.  By not being worried right now, could turn out to be devastating for the human race.

And all this talk about saving the planet is rubbish.  We need to save ourselves from ourselves.  The planet will get along just fine without us, albeit in a slightly altered state and probably a lot better off, but with a lot less species inhabiting it.

It is this reason, in my humble opinion, why we need to start behaving like people who really do believe they are living in the time of the greatest emergency mankind has ever faced.

If more people also begin to notice the emergency, then my work is not for naught.  Ordinary people will begin to act in a positive way to help avert the climate crisis by voluntarily lowering their carbon footprints, or alternatively, the government of the time acting on policy and legislating large cuts in emissions and change the way we use fossil fuels.

Crisis over, and the emergency mostly goes away, except for the global warming that is already locked in.

I believe that at this point in time it will be the only way we will be able to save ourselves, unless a global leader takes the reins and leads us down the right path to avert the climate emergency.  There are signs of hope in the direction of the US and China of late, and some hope for meaningful emissions cuts at Paris at COP21.  But unfortunately no such meaningful action in Australia. 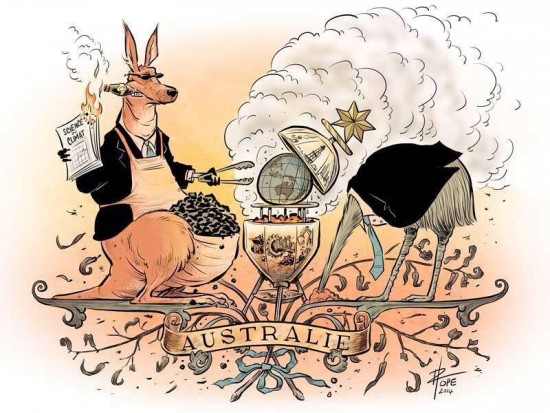 In this country, environmental leadership is a rare commodity indeed.  Don’t hold your breath waiting for it to happen any time soon.  Look what they’ve done in reducing the Renewable Energy Target in the last few weeks.  Bloody ludicrous and the opposite direction we should be moving.

It will be up to people like you and me to step up to the crease and bat winning score!  The great thing is that lots of ordinary Aussies are installing their own renewable energy systems in the form of Solar PV on their homes.

We just need better incentives to keep the momentum going.  Taking away government subsidies from the fossil fuel industry would be a fantastic start, as would placing a price on carbon emissions.

Oh, that’s right, we had one of those that was actually working.

Some clown took it away.  I wonder who that could be?