I don’t know if it is someone else’s quote but here is one of my simple philosophies;

“If you haven’t had a failure yet, you are not trying hard enough!” – Gavin

Everyone has times in their life that things don’t go as planned. No one is infallible especially when it comes to the sharp learning curve that comes with adopting a more simple or sustainable lifestyle.

The word ‘simple’ conjures up the notion of ease, or effortless, but believe me, it is often far from the truth. However I believe that something worthwhile doing or implementing is the ultimate reward and is satisfying.

For instance, two weeks ago, on a very windy day, Kim rang me up at work and told me that the door track of the greenhouse had come loose. I asked her to fix it as best she could and I would fix it when I got home. She did a sterling job with some rope and one of the pylons that hold up the garage roof, however the wind had done more damage than what she initially thought. It took me over two hour to fix two missing panels that had blown out because I had to partly dismantle the greenhouse to slot them back in, and another thirty minutes to repair the door track and remount the doors. A simple job that turned into a difficult one, however the end result was a more sturdy structure that will withstand strong winds once again.

One thing that I really didn’t have any experience in was raising backyard chickens. Sure, I had watched my parents raise them when I was a kid, but that is no real substitute for doing it yourself. With plenty of research and starting off small we have become capable chicken keepers. We did underestimate the impact that a bantam rooster would have on our lives, and had to fix the error by giving Mr Darcy back to the breeder. My failure, not Mr Darcy’s.  He was just being what nature intended. In hindsight, it was good experience and I now know why roosters are not usually allowed in suburban backyards! 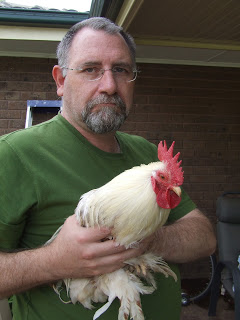 Another example is my recent Pepino rescue. What I thought would be a five minute job of tying up the Pepino bush to the trellis became a forty minute evolution. Some one had moved my twine and pocket knife and it took me ten minutes to find them. Then I clumsily managed to snap off three of the branches of the bush, but managed to tidy that up. All in all, the bush is now safe from small chickens that have their beady eyes on my melons. I also turned it to my advantage because I used the snapped off branches to propagate the plant and make four new Pepino plants. All being well they will grow roots and I will expand my Pepino harvest. A great result as far as I am concerned.

The final example was our recent sheet mulching effort in the front orchard. I stupidly thought that it would only take a couple of day’s effort. It did not. It took us nearly four full days to weed, sheet mulch then add normal mulch over the top. What complicated matters were that one of the weeds was extremely invasive (kikuyu) and slowed down our progress considerably. Once I managed to dig most of it out, which took a full day, the rest was a breeze. The benefit of all this hard work was a great looking garden/orchard and that the fruit trees are now protected from moisture loss. Very satisfying once completed.

Other things that sometimes don’t quite go to plan, but have got better and easier with experience are bread making, beer making, cheese making, and any new gardening task or plant that we have not grown before. You need to do a bit of research once something has gone amiss, but you soon recover and try again.

However, don’t for one second let failure or hard (but rewarding) work deter you. As Goethe once said;

“Whatever you can do or dream you can do, begin it. Boldness has genius, power and magic in it!”

NB: ‘Beer and skittles’ is shorthand for a life of indulgence spent in the pub. A saying frequently used during the 19th century, and during my time in the Navy.