One of my readers, Jessie had this to say about the Peter Cundall post;

“He’s my hero too!
I too think the carbon tax is a good thing. And for those that complain about increased prices on things because the tax is applicable need to work out how to do without carbon causing things. Grow/raise your own, reduce reuse recycle and repurpose or do without. During WWII we faced rationing. If this is the environmental war then maybe we should be rationed on un-eco friendly things.”

I totally agree. If this is a war for the survival of all the other creatures of the earth, then we need to minimise our ecological footprint. A war for the environment, not against it.

We need to Dig for Victory to help win this war. One of the largest components of this ecological footprint is the production, harvest, transportation, and storage of food. Instead of covering our arable land with swathes of suburbia, we need to grow more of our food in the urban areas. Yes, this is what we need to do. This will only serve us well in the future. Let me explain.

Pipe dreams of a northern food bowl and the prospect of becoming the food bowl for Asia are just that. Pipe dreams. Without a reliable and healthy river systems, there is no food bowl.

As climate weirding continues unabated due to our lack of action, our monoculture industrial agricultural system will suffer even more hardship. Some current examples are the flooding rain in the UK, and the heatwave and crop losses in the US. Experts are predicting that both of these climate events will limit global food stocks this season.

Additionally, as we reach peak phosphate and peak oil, this system of agriculture will not deliver the surpluses as it has done so in the past.

Urban/Suburban agriculture using organic methods will be the only way to avoid shortages or rationing, and thereby enabling families to put meals on the table.

So, wouldn’t it be the sensible thing to do to begin to learn how to grow your own food, and plant a few fruit trees in your yard, even if only in pots? Logic would have it that it would be prudent to learn these skills sooner, rather than later.

Lets look to the past for similar resource shortages. A good example to model this type of action can be found during World War II.

“During 1942 food shortages began to have an impact on the Australian home front. The agricultural industry was struggling with massive labour shortages, a severe and prolonged drought, and major shortfalls in imports of seed stock and fertiliser. There was a growing realisation that unless agriculture became a focus of the war effort, food shortages would be imminent.

Many Australians were already keen home vegetable gardeners, being self-sufficient, with fruit and vegetables and a “chook shed” down the back. Others took to the idea afresh and turned over their whole front and back gardens to vegetable production, often selling excess produce to raise funds for the front. Some people formed neighbourhood gardening groups as a means of feeding their families. Others formed gardening collectives, specifically to raise funds for the war effort.

As the fear of invasion dissipated towards the end of 1943 food production became more of a national priority. Even though improvements were made in the agricultural sector to meet the demands of war, home gardening continued to raise funds and morale, and feed local communities and families, throughout the war.”

If it worked for the allied countries in WWII, then why can it work for us now?  Why can’t we have a Ministry of Food now to kick start things off?  Just because it looks like we have abundance now, it doesn’t necessary mean we will continue to be able to purchase our hearts desires down at the supermarket in the very near future.
Maybe we shouldn’t relay on Federal governments to come to our rescue, and should help ourselves.  I don’t know what may occur as things begin to progress, but the signs of economic depression, and resource scarcity are blatantly obvious to those who can read these signs.  Local actions are those that will be most effective when TSHTF.
I am not trying to be alarmist, only cautionary, because I know how long this skill takes to master before you can grow enough food to supplement purchased or at the worst, rationed nutrition.
So dear reader, if you haven’t already done so, I would urge you to begin to learn the basic skill of growing your own food.  It doesn’t have to be in your backyard, it can be in a community garden, or with a local gardening group that focuses on backyard food production.  You will only learn if you get involved now.  Learning this skill takes time, and it no good trying to learn it on the fly as you will be well short of time by then.
One more request.  If you do grow your own fruit, veg, and/or livestock, then get involved with community groups that help teach others.  We need teachers just as much as we need people to learn. 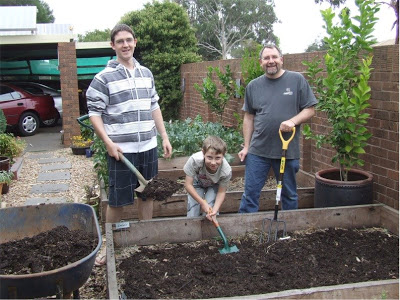