It has been a long weekend here in Victoria, so I have made the most of it.  Today was the official holiday celebrating the establishment of the 8 hour day in this state, back in 1876.

In this Victoria, our dear land,
The first that dared be free,
To show the world what freedom meant
In new lands ‘cross the sea

I just wish more people would work the 8 hour day that our fore-fathers fought so hard to achieve all those years ago.  I don’t!

Anyway, I have been cooking, reading, and gardening over the three day break, which has been so relaxing after a busy week at work.  Saturday afternoon, we made basil pesto, a tomato and cucumber salsa, both for topping bruschetta, and I made a vegetarian lasagne.  All delicious to share with friends and a few glasses of wine.  I even broke out three different home made cheeses for a platter.

Sunday, I read all day.  A friend had leant me a comic book series called “Charley’s War”, and I whipped through eight volumes.  Also I cooked a spicy chorizo minestrone, which is the first serve of meat I have had all month.

So today, after an early rise to feed the chooks, I fell back asleep, which is most unusual for me.  I am normally an morning person, even on weekends.  The dogs woke me up at 10am, so it was cherry jam on toast (both home made), and then Ben and I went for a walk for about an hour checking out the neighbourhood.  One thing that we did notice was the massive uptake of Solar PV in our area. Every few houses had at least a 1 kW array (or more) installed on their roof.  It became a bit of running joke who would spot the next row of panels first!  And why wouldn’t they install them when you can get a 3 kW system for around $5000 now fully installed.  I think most people are now ordering them to keep their electricity bills low, but either way, it helps avert the need for additional coal powered generation in this state.

When we got home from our walk I decided to spend the afternoon in the veggie patch.  I had to pick the remaining tomatoes, dig up the vines, and remove the cucumbers that were spent.  Here is the before picture. 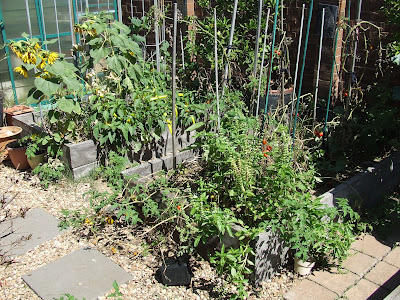 It may not look like much, but it took me an hour to clear out these two beds of all the unwanted plants.  I left in two long eggplants in the ground in the first bed (closest) and some basil that we will harvest during the week. 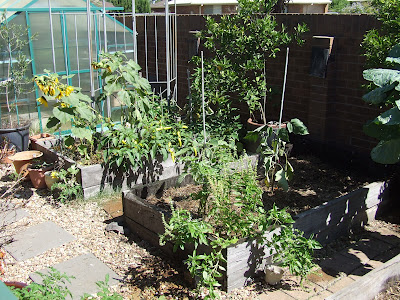 Out of the two beds I harvested some green zebra and cherry tomatoes and a few eggplants. 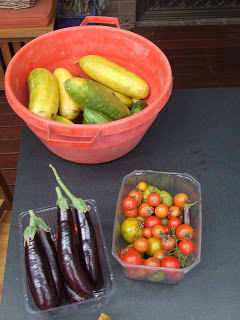 The chooks demolished the old cucumbers, however I did keep two for seed saving for next year.

After the beds were cleared, and as the phase of the moon is right for sowing root crops today, I decided to sow some onions, leeks and spring onions in punnets and jiffy pots. 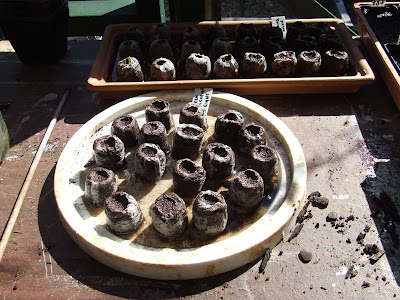 Here are the leeks and spring onions in jiffy pots.  I planted some two weeks ago (top left) which germinated, however half did not.  It may have had something to do with the age of the seed and the moon phase was not right at the time. 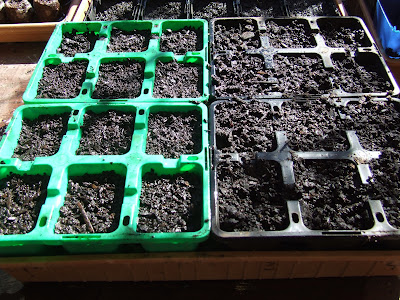 So to test this theory, I am performing an experiment.  I planted some snow peas in the green punnets on the left (above), and left the black punnets empty.  In two weeks when the moon phase is right for above ground plants, I will sow some more in the black punnets, and we will see which ones grow better.  I will keep you up to date on the progress. 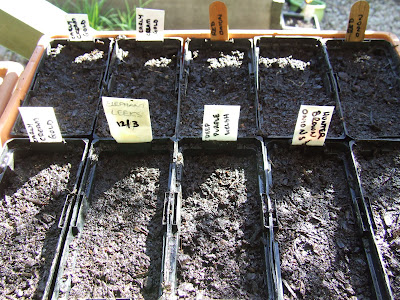 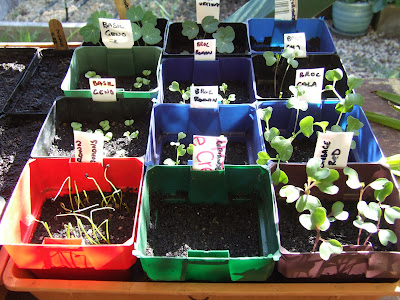 I am a bit disappointed with the Brussels Sprouts, so will try to sow some more in two weeks time.  All of these nearly have their first true leaves so I am going to plant them out after the next New Moon.

All of these seedling trays are located on an old trestle table that I have placed on the west deck and now serves as my planting area.  It is nice an close to the main entrance to the house, and I have to walk past it every day on my way to the carport.  That way I am more likely to water them when dry, and they should not suffer neglect.  The table is also overlooking the main veggie patch, so it gives me the desire and inspiration to keep planting seedlings whilst looking at the rapidly emptying beds.  Nothing like a bit of motivation to get the job done. 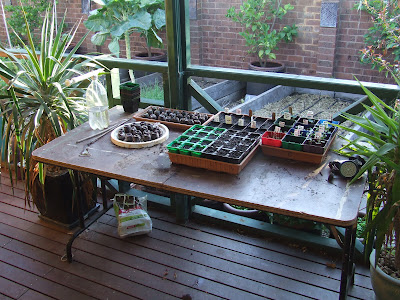 Did anyone else plant out some root crops over the weekend?  I would love to hear what you are planning for your edible garden for the southern winter, or northern summer!