Well, Saturday and Sunday were huge.  There was more soap in the house than a season of Young and the Restless!

The day started something like this.  Up early to do my morning jobs.  Fed the chooks, cleaned the pool, harvested more tomatoes, refilled the water butts from the main tanks.  The light rain we had on Friday helped fill the tank by another quarter.  Then off to the dentist for more root canal work.  It was harmless, and after 30 minutes in the chair, it was down to the library to drop off some books.  A quick drive to the feed shed and a few bags of chicken feed later, it was off home again.

Kim was up by now (0830), and we began to write up the items needed to refresh the stockpile.  That took about an hour to complete, but we are now well supplied including ingredients for the afternoons activities.

The plan for the afternoon was to make soap, lots of it.  We had an order from an  friend for 50 bars.  She didn’t care if they worked properly (they do), just that they were home-made and smelled nice.  Easy peasy, lemon squeezy!  Castille soap was the easiest to make with minimal ingredients.  Olive oil, lye, water and fragrance.  I checked SoapCalc to see how much water and lye I needed to add to the 2kg of olive oil.  Then I put the goggles and rubber gloves on, and began to play with my big boy chemistry set.  It took me back.  I had a great chemistry set that Dad bought at the sale yard when I was a kid.  I was always blowing up something!

It took me about 40 minutes to produce a large batch of soap.  We chose two fragrances to add and a little yellow colour to tell the batches from one another.  Frangapani in one lot, and Coconut and lime in the other.  We used some small plastic storage boxes as moulds as there were just the right shape and size and well greased with cooking oil spray.  Kim and I worked as a team with me doing the main ingredients and Kim adding the colour and fragrances.  We even managed to stop mixing at the right moment so that I could pour the trace into each mould.  Happy with our achievement for the day, we wrapped the moulds that held 40 bars of soap in towels so that they cooled down slowly overnight.  The would be ready to release from the moulds in 24 hours.

Kim was upset and thought we would have to start from scratch.  Not I!  I did not yield to defeat that easily.  Into the tool shed I sprinted, and out I came with a paint scrapper.  It fit into the individual moulds well.  I worked around each bar and managed to lever them out, one by one.  They were shaped a little like a small banana by the time I had extracted them, but still worth saving.  After all, who likes wasting stuff?  Certainly not me.

About an hour later, I had pried each bar from its prison, and joined Kim at the dinning table, who had already begun to resurrect each bar by hand shaping it into the correct geometry.  This took us a good two hours to hand craft each bar into something that resembled soap and not playdoh.  I kept our spirits up by cracking soap jokes to keep Kim smiling.  Here’s one.  What do you call someone who steals soap?  A dirty crook! Ha ha. 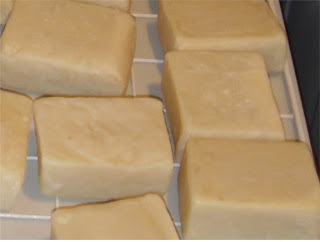 We both hoped that the potential buyer would still take them off of our hands, otherwise, I know what everyone is getting for birthdays and Christmas for the next few years.  We can always grate them for soap flakes for the washing machine.  Or, we could sell them for a premium, being rustic and individually hand crafted.  No two are alike, I should individually number them all and charge $15 a bar!

Looks like we have about two years supply on our hands, as Kim has decided not to sell them, and has purchased 2 x 2kg soap moulds to start again.  I am sure we will have better luck next time.  Now we have 4 more bead boxes for Kim’s jewellery fetish, and I am out of pocket for not only the old moulds and materials, but for the new wooden moulds as well.  Bummer.

Another soap star saved from an untimely death, and fun was had by all concerned.  I can’t think of a better way to spend time with my lovely wife (well I can, but not fit for this blog).