Is there no stopping the broodyness of my two little Pekin Bantams, Pippa and Poppy?  Apparently not.  For the second time this year they have decided that they want to be mums again.  So it was back into Coventry / The Cooler for both of them, in the attempt to make them as uncomfortable as possible so that they snap out of the habit and start laying again.

I figured out why they started this time around.  It coincided with a big egg day.  Every chicken, bar one, laid an egg.  There were four in one nesting box and three in the other.  As it was a very hot day, Kim did not check on the girls at lunch time like she normally does due to fatigue.  The eggs didn’t get collected until I got home at 6pm.  Much to my surprise I found both little ladies warming up each clutch of eggs, rolling them over every so often to heat them evenly.  I watched them for a little while to check out what they were up too, and they were definitely settled in for the duration.  They were most upset when I turfed them both out of the boxes and stole their supposed “babies”.

Last Thursday morning, Kim called me to let me know that they were at it again and that she was too scared to nudge them lest they peck her. I suggested that we buy some fertile eggs and move the clucky girls to isolation to let them hatch.  I was quite serious, but Kim was not impressed.  “Too much hard work”, she said.  “But Ben would love it”, I replied.  “You would have to remodel the run”, she added.  I stopped, thought, and then replied, “Lets not get any fertile eggs!”  Maybe later.

I let the little girls out of isolation on Saturday afternoon, which may have been too early.  They rushed straight back into a nesting box.  So, I gathered them up and put them back into the cage.  Another night would not hurt them.

7am Sunday morning, all of the chickens were quite vocal, with the bantams making the most racket.  I let the little ones out into the front run with the other hens where they all waited for me to serve up breakfast for them in the back run.  No sooner had I opened the flap on their house, they all stampeded to the feeder, including Pippa and Poppy.  Great, they have snapped out of it, I thought to myself.  I continued to check on them during the day, making sure I collected the eggs regularly so as not to give them an excuse to continue their broody ways. 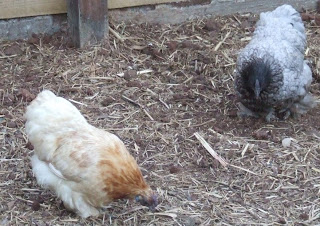 One final head count before lock up for the night around dusk and we were two chooks short!  Lo and behold, the two bantams were back in the nesting boxes, sitting on imaginary eggs.  I turfed them off, they jumped onto a perch and I let Kim know what was going on.  “Back to Coventry tomorrow?”, was her question.  I agreed.

Yesterday morning, the naughty little ladies were back in the nesting boxes settling in for the day, or so they thought.  I scooped them both up, popped them in the isolation cage and gave them fresh water and food.  They are still in there today, with an estimated release date of Thursday evening or until their combs turn red again.

These beautiful little hens have such a powerful motherly instinct, and they are so bloody determined to hatch eggs that are just not theirs.  The other hens really don’t know what all the fuss is about, as this instinct has been breed out of the ISA Brown.  I like the bantams determination and grit.  In a weird way they remind me of me!