With a thirst for some local cider at Harcourt, Victoria, yesterday we set off on a day-trip mainly because we were all getting cabin fever from staying at home so much over the holidays. 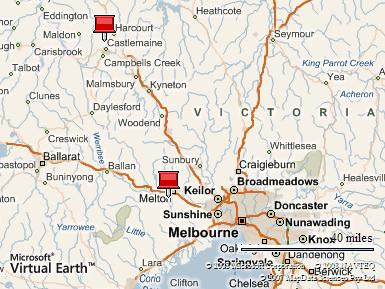 We set off at about 1100 with a picnic lunch (sticking to our first goal for the year) and headed up to Kyneton as the first stop, which was about 40 km away.  The hybrid got good fuel economy (funny about that) of about 5.8 km/100 litres because I have started to use Ethanol 10 fuel in the car.  The jury is still out as to whether this type of fuel is actually any better.  Sure, it is 3 cents a litre cheaper, but the fuel economy is not as good as straight unleaded fuel.  Time will tell and I will write a separate post about it in the future.

The reason we stopped off at Kyneton on the way to Harcourt was because Kim wanted to visit a cupcake shop that she had seen on a travel show on telly.  We stopped off at the information centre first, had our picnic lunch, found a map of the town, and set off again.  We found the shop in historic Piper St, but alas, it was closed for the week.  Just about every other shop in the street was open except for the cake shop.  Apparently, the shop did very decorative cup-cakes that are to die for.  We will never know.  Maybe next time love.  Across the road we found a fantastic little nursery.  The nursery had espaliered trees which I though I could do with some space I have behind the chook house.  I have large poles in the ground already, and only have to put up some trellis to tie the trees onto.  Here are some photos, click to enlarge.

After the nursery we dropped into a bakery and Kim and I shared a little carrot cake, and Ben scoffed a little chocolate mud cake.  Nice!  So nice in fact, that Kim is baking her very own Carrot Cake as I type this.  The smells are amazing!

We then jumped back in the car and 45 km later we got to the cidery, in a little town called Harcourt.  The Cidery is called Henry of Harcourt and has about 14 acres of apples on the property.  Kim and I sampled all of their faire, but I had to tip most of mine out because I was driving.  Kim felt quite tipsy after the tasting which made me laugh.  We bought 20 bottles of cider and perry which cost us $100.  Not bad at $5 a 500ml bottle and it tasted fantastic to boot! Here is a picture of Drew Henry, who, with his son Michael run the orchard and make the cider on site.  If you want to learn a bit more about the Australian Cider industry, have a look at this ABC Landline segment called "Cider House Rules".  At the link there is a video of the report to the right of the page.  We watched this report on TV last Sunday, found it very interesting, and that is how we found out about the cidery in Harcourt.

Drew was a proper gent, and a fantastic host.  His knowledge of ciders throughout the world was second to none.  It was so nice meet him and we will definitely be back his way again.  He even gave us directions to one of his mates wineries, that he says makes a fantastic Pinot Noir.  Unfortunately, we did not get to the winery, as we had to get home by 1600.  Megan was minding Butch and the chooks for us, and had to go to work at 1630.  Maybe next time.

All this time, Ben was outside looking at the duck pond near the cellar door, and was also trying to catch the 10 week old chickens.  Ben has grown very fond of our chooks, and is now trying to convince us to get some young ones.

The trip home was uneventful, and we really enjoyed out time out.  As always, we both said we should do this more often, and probably will.  So, what sort of food goes well with cider.  Well, apparently, soft cheeses and crackers go down a treat!  For dinner we decided to get out all the fruit and cheese we had, and together we made a platter for all four of us.

The olives were from Rockbank (10 km away).  All the cheeses were made in Gippsland (about 80km away), and the strawberries, peaches and apricots were from Bacchus Marsh (13 km).  The picked onions were home grown/made, and the cider we picked up as described above.  Everything else was Australian made.

So it was about as local as you could get a platter I reckon.  We certainly felt great afterwards, and really enjoyed our day.  It is a pretty good feeling attempting to be a locavore.  I believe we could give the 100-mile diet a fair run for its money around here.  I think I will have to talk to Kim about that one before we set out on that adventure!