Yesterday was another fruitful day in the veggie patch.

Kim, Ben and I started at about 1100, after my hydrotherapy session, and their task was to harvest all of the broad beans, and to cut the stalks off at ground level, and my job was to do everything else. Or so I thought.

I started by finishing off the bed near the chook house by sprinkling a liberal application of dynamic lifter on the top of the clay, which was still moist, and then put a layer of mulch over the entire bed. I used the chicken coop bedding that I let dry out the day before. Tomorrow after work I will plant my silverbeet and spring onion seedlings, and throw in a few sunflower seed up to the shed end just for the chookies! I put a chicken wire fence around it this evening, hence the posts in the photo, and the chooks are not impressed at all. This is where they were having a major dust bath when they free ranged! 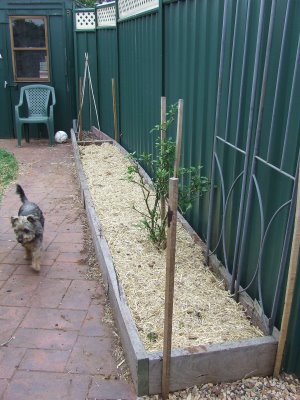 Unbeknownst to me, Kim had cleared the bed of nasturtiums and placed all the plants near the compost bins. Then she got Ben out of the house, and as he took a big stainless steel bowl out of the cupboard to put the beans in, the cupboard door fell off in his hand. Dad to the rescue, and with my trusty screwdriver, I had it back on in a jiffy. Back out doors, Ben and Kim were diligently picking all of the bean pods and hacking the stalks to the ground. We left the roots in the ground so that the nitrogen nodules fixed to the roots would rot back into the soil.

I got back on with the task of clearing the salad bed, and pulled out all the lettuces that had gone to seed. There were about 6 large plants of loose leaf lettuce and I threw them all into the chicken coop. The chooks went crazy over them and had demolished all the plants within an hour. Two beds down and two to go.

I started on the root veggie bed and started to harvest all of the beetroot. We got quite a few big ones, and a few smaller ones that I threw in the compost. Maybe I should have thinned them out a little more! We got a decent crop and seeing it was the second time I have ever grown beetroot, I am quite proud of the harvest we received. The beetroots weighed in at 1.4 kg. 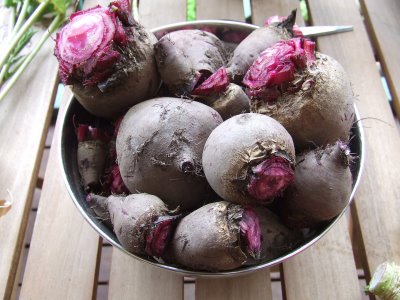 As you saw in yesterdays post, I also harvested some parsnips. The entwined plant was quite a find, and even though I have seen some funny shaped vegetables in my time, that is the first time I have seen two embracing parsnips before. Now, three legged carrots is another story…. 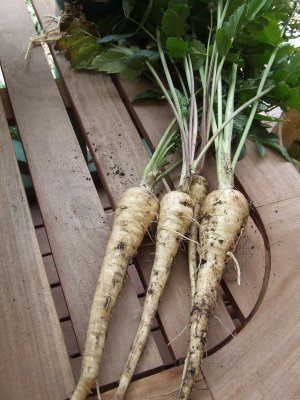 I left about 10-15 parsnips in the ground, and I will wait for them to get a bit bigger before harvesting any more. I will just plant the summer crop around them. In the same bed I had kept the two remaining capsicum plants which I had hoped would re-sprout leaves like the chilli bush around the other side of the garden. One has just shown shoots of leaves and flowers, but the second one has given up the ghost. I pulled it out and cut it up into small bits for the compost bin. There was also a couple of daikon radishes that I had let go to seed, and one of the roots were huge. 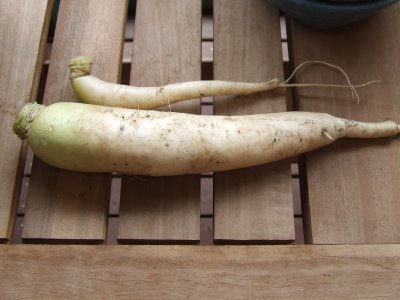 I will do some research on how to pickle them, as I have heard that they are very nice preserved this way. Three down, one to go.

Kim and Ben had done a marvellous job of cutting the bean stalks down, and near the end I noticed that there were a few small shoots on some of the plants. We left them intact, cutting off only the longer stalks on those plants. Who knows, we may get a small second crop.

So with all beds cleared and with a whopping great pile of vegetable matter next to the compost bins, it was time to prepare the beds for the next planting. I wanted to try something different this year, so I took a leaf out of Esther Dean’s no dig garden method. I added a 5 cm layer of compost to each garden, straight over the top of the old mulch. I then added a sprinkling of dynamic lifter to each bed, about two 10cm garden pots worth. Then, on top of the fertiliser, I added a thick layer of either chook bedding from last weeks clean out that I had drying in Ben’s old garden bed, or sugar cane mulch when I ran out of straw. The mulch layer was between 5-8 cm thick. I then watered every bed very heavily, because it hasn’t rained for over 6 weeks here and most of the beds were bone dry even though I had watered them about 4 days previous. It must have been the hot day we had on Saturday that dried them out. Here is the nearly finished beds in various stages of completion. Click to enlarge. 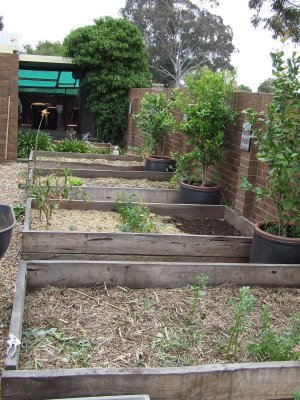 As you can see, it was quite overcast, and the temperature only got to about 18 degrees, so it was great weather for gardening. I hardly broke into a sweat all day. And, no, I didn’t hurt my back. Thank you to all of you who were concerned about it on the previous post. It is still feeling pretty good as I write this.

Whilst I was preparing the garden beds, Kim was busy shelling the beans. The final weight of all of the shelled beans was a massive 1.9 kg of delicious broad beans. I am going to blanch them for freezing tomorrow, when I get a chance. 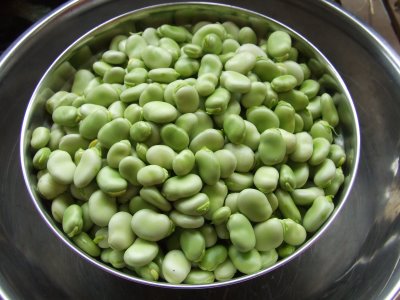 After all the beds were finished, and the produce harvested, it was into the fridge for all the veggies until I decided what to do with them. Then it was off to the compost bins to sort out all of that vegetable matter. By adding compost to one of the layer in the garden beds, I had managed to empty one and a half compost bins. Now I had room to put the new green matter to good work. It took me 45 minutes of tearing and ripping, but I managed to get through the massive pile without a single blister. I am glad I wore gloves, otherwise my sensitive I.T. hands would be covered in blisters and would be blood red from the beetroot leaves!

After the composting, it was nearly time to call it a day, however I had a little energy to try and preserve some of the beetroot. I have always wanted to try and pickles some beetroot and make a better product than you can buy in a can. Well, luckily I stumbled across this Pickled Beetroot recipe online, and it was fairly simple to follow. I cooked about 500gm of beetroot, for 25 minutes in salted water. Then I put on rubber gloves and peeled them over a few sheets of newspaper so as not to stain the chopping board. Then I wrapped up the peel in the paper and threw them into the compost bin. Once peeled, I sliced them into 5mm slices and packed into two old sterilised pasta sauce jars with pop top lids, and poured the warm liquid to cover the contents and sealed. At a push, I probably could have fit it all into one jar, but I have been caught out over-packing jars before. The lids popped down after two hours, and I put on a nice label and will eat before Christmas or at our next BBQ. 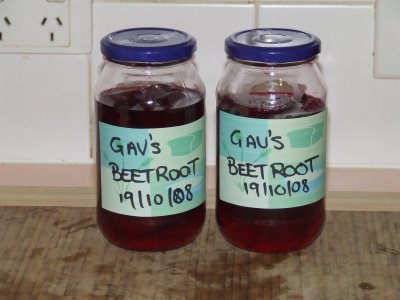 It was about now I called it a day. What a huge day, and very satisfying. Tomorrow evening I will plant as many of the larger seedlings I have, and directly sow butternut pumpkins, space saver cucumbers, watermelons, rockmelons, zucchini, and lazy housewife beans. I have broccoli, 8 different kinds of tomato, spring onions, beetroot, and silverbeet to plant as seedlings. Now that we only have a few loose leaf lettuces remaining, I will plant some different types of lettuce seeds in seed trays tomorrow.

Tomorrow night, we are having a roast chicken. No, not one of the girls, but a commercial free range chicken that we bought from Aldi. We are going to have roasted parsnips, roasted potatoes, roasted beetroot, and some steamed broad beans. Yum, I can’t wait to cook up that lot! It will be even better seeing that we grew most of the vegetables ourselves. It certainly brings the food miles down for the meal, and the spuds were grown just down the road in Gippsland, and I think the chook is from Rockbank. A pretty locally sourced meal, all from within about 140 km of our home, fit for a budding family of locavores. I am proud to tell anyone who will listen, that we grow our own food. It gives you a warm fuzzy feeling inside to know where your food comes from and how it was farmed. Here is to local food becoming very popular, and down with out of season food. The latter tastes bland!