This evening, I stayed back in the city after work to attend a presentation about slow pyrolysis technology (more in another post).  It was very informative, and before hand I had a chat with a guy called Hamish from Yarra Energy Foundation, who is of the same opinion on many topics as I am.

So, after the presentation and another quick chat, I headed off to the tram stop, then rode the tram to the regional rail station.  It was about 8pm by this time and I could have eaten a low flying duck, but as ducks were scarce I opted for the only food outlet open within walking distance of the train station, that being Hungry Jacks or better known as Burger King.  I hate fast food at the best of times, with their feed lot beef, CAFO chicken and orangutan killing palm oil derived burgers, so I chose what I thought was going to be a safe option.  Without looking at the menu board, I ordered a veggie burger as it was one of my two weekly veggie days, and thinking that if I was going to eat crap, at least nothing had been killed to satisfy my hunger.

Anyway, as I was munching into my presumed guilt free burger, I happened to look up at the menu board above the counter, and in fine print read the words “*includes calf rennet” just under the veggie burger item as if it was a feature of this meal.  Now the majority of people I know have no idea what rennet is, or for that matter what a calf is!  After all, most school children in urban environments think that milk comes from a carton.  As good cheese makers know, calf rennet is used in cheese manufacturing to coagulate the milk into curds and whey, however there is a perfectly acceptable substitute in the form of vegetable rennet, which I use in all of my cheeses.

To my surprise, this veggie burger is actually sold as under the beef classics menu, which makes sense seeing that after a bit of research it contains the following: Contains Wheat (gluten), Sesame Seeds, Soy, Egg, Milk & Milk Products. Cheese and Veggie Patty both contain Animal Rennet.

So to address my concerns I talked to the manager of the store who promptly told me that I should have asked for the burger without cheese!  To which I told him that I was never offered a cheeseless option, and that I was a vegetarian (a white lie), to which he shrugged his shoulders and walked off and mumbled that he had never had a complaint before about it.  I didn’t know it at the time, and neither did the manager, but the patty has cheese in it as well!  What crap service for crap food.  Veggie burger my arse!  Hungry Jacks have joined my boycott list.  They join McDonalds, Red Rooster, KFC, Coca-Cola, and Nando’s Chicken.

Maybe if the warning was not in the smallest of texts, I would have not ordered the burger, however as I was halfway through it, and not a strict vegetarian, and was very hungry, I removed the remaining cheese and ate the remaining burger, angry and disappointed that they would continue to get away with the deception.

I wonder how many vegetarians have chocked on their pretend veggie burger halfway through their meal?

I suppose the Romans said it best.  Caveat emptor

One of our goals this year is to eat more vegetarian meals each week.  So far we are doing well.

At about week two, we dropped the plan for eating veggie from Friday to Monday and just adopted a very simple, every other day approach.  It was really Kim’s idea so I will give her full credit.  The main reason was that we all enjoy a Sunday roast and at least this way we would be able to have one every fortnight.  It is also a much better method of adapting to change and embedding this as one of our behaviors.

Initially it did take a fair bit of work to figure out simple, easy to cook meals that were nutritious and tasty.  We found things like soups, stews, tagines, salads, veggie burgers, omelettes, stir fries to name a few and all tasty alternatives to meat.  As we have not removed meat completely from our diets, we don’t have to worry too much about complex proteins on veg days, even though Kim always manages to throw a can of 5 bean mix in with the soups and stews!

Strangely, we have also noticed that when we do eat meat, it is in much smaller quantities and prefer to bulk the meal up with more veg, rice and pasta.  Our fruit intake has also increased with small harvests from our apricot, peach and nectarine trees, with a bumper harvest from the old plum tree.  I even bottled (preserved) 9 big jars of plums in syrup, as well as 4 apricot and 4 nectarine.  We have enough fruit to last the entire winter or until we get sick of it, and we still have the Jonathan apples to harvest!  I will preserve some rhubarb in the next few weeks as it is now getting big enough to pick.

Anyway, some of my favorite veggie meals are spicy tomato soup, veggie chow mien, vegetable curry, chick pea and potato curry, Spanish omlettes with mushroom and caerphilly, lentil burgers with beetroot and egg on a home made bread roll and spicy sauce.  All are delicious and mouth watering fare that tantalizes my palette.

Now that we are approaching the end of February, I do believe that we have formed this habit and made it one of our behaviours.  If you perform something enough times (7 I think), it becomes normal behaviour and looking back you often wonder why we didn’t do this sooner!

After a big sleep-in today, Kim and I whipped around the house in a cleaning frenzy and then put the decorations away for another year.  We cleaned out the laundry to make space for the cheese fridge because it was overheating in the alcove that was built for it.  I am pleased to say it is all better now and sitting at a cool 13C with four wheels of cheese in it.

I pulled out three spent zucchini bushes, turned over the patch and added lots of fine chicken bedding to the bed to prep it for some new vegetable that I am yet to decide upon.  There were quite a few small zucchini with flowers still attached, so I decided to do something special for dinner.

Now, Stuffed Zucchini flowers are pretty simple.  Just mix a bit of home made Ricotta* with a pinch of nutmeg, salt and pepper.  Pull out the stamen in the flower and wash gently to remove any insects.  Stuff the flower and twist it at the end.  They should look something like this once stuffed. 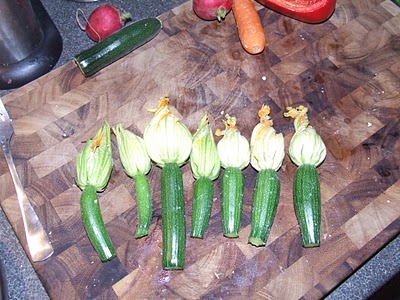 Then make up a runny beer batter, dunk and deep fry in olive oil^.  Season with salt and pepper, eat with a little yoghurt* whilst still hot. Yum.

I actually did quite a few vegetables tempura style, so as not to waste the batter.  Carrots, red and green Capsicums, Radish*, and some more large slices of Zucchini*.  All were very tasty with the flowers, large zucchini and capsicums being my favourites.  Ben really enjoyed the carrot prepared this way and the large zucchini. 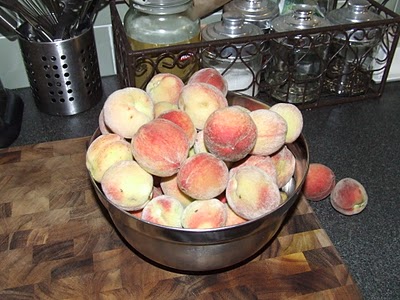 As for the Peach Crumble, it is the simplest desert to make.  Here is our recipe;

Cut peaches in half, remove stone and place in layers in a 2 litre oven-proof dish.  Sprinkle white sugar between layers.

Crumble – Sift flour into a bowl.  Rub butter into flour with fingers until it resembles fine breadcrumbs.  Stir in the castor sugar until well mixed.

Sprinkle crumble thickly and evenly over the fruit.  Press down lightly with palm of hand.

Bake at 180C for 30 minutes or until golden brown on top.  Serve with custard or fresh cream.

Note: * for home-made or home grown and ^ for local fare. 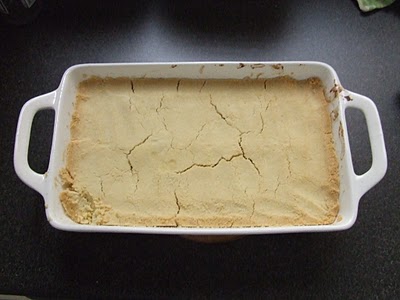 Very nice!  I had mine with brandy custard left over from Christmas.  We froze the other half for another night.

So, another successful and easy veggie day.  The next one is on Friday.  Bon Appetite!