Snow peas are very easy to grow in the suburban garden.  You just need some trellis or old branches for them to cling to as they grow and some well composted soil.  Just keep the soil moist as they grow, which at this time of year is not difficult.  Plant snow peas in the cooler seasons and germinate at soil temperatures between 8° – 20°C (46° – 68°F).  Here in our temperate zone they are best sown from April to September.

A few rows is all you need to keep you supplied with delicious sweet snow peas for a few months of the year.  Succession planting will ensure a longer crop.

Snow peas, along with sugar snap peas and unlike field and garden peas, are famous for having edible pods that lack inedible fiber and taste sweet and crisp.  The pea pods are best picked when still flat, before the main seeds start to swell.

Snow peas also host beneficial bacteria, rhizobia, in their root nodules, which fix nitrogen in the soil.  They are great companion plant, so try growing leafy greens like kale or chard (silverbeet) in close proximity.  They will benefit from the additional nitrogen.

If saving the seed for your next crop, let a few of the pods mature and dry on the plant.  Pick when brown and the seeds are round and hard.  Store in an airtight jar to prevent them from absorbing moisture or going mouldy.  The seeds will keep for up to 5 years.  Don’t forget to label them with the year that you collected them.  I slip a little bit of paper into the jar with the date and type of seed it contains so that I don’t have to guess next year.

Who said that food gardening was hard?  Go on, what are you waiting for?  Get outside and plant snow peas this week!

I know that everyone leads busy lives, and we are no exception.  One would think that because we lead a simpler lifestyle that things would be a little less hectic, but not so.  We’ve been busy as a bee in spring or to put it in Australian,  we’ve been flat out like a lizard drinking.

Since my last post we’ve got a few things achieved;

Of course there were the regular things we do around here like clean out the chook house, water the fruit trees, try to grow winter veg seedlings (not much luck there).

So let’s have a look at a few photos that I took over the last couple of weeks. 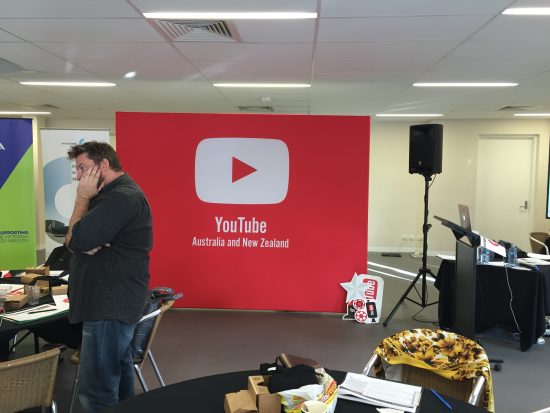 I was invited to Docklands Studios here in Melbourne by YouTube to learn how to produce engaging content for my YouTube channel cheeseman.tv.  They contacted me just before my channel reached 10,000 subscribers, so I was chuffed with the invitation and learnt a lot at the lab.  I have been creating regular cheese making content each week and I am pleased with the feedback I’ve been getting.

Speaking of cheese, I’ve made the following types in the last couple of weeks; Edam, Havarti, Mysost, and Gouda. 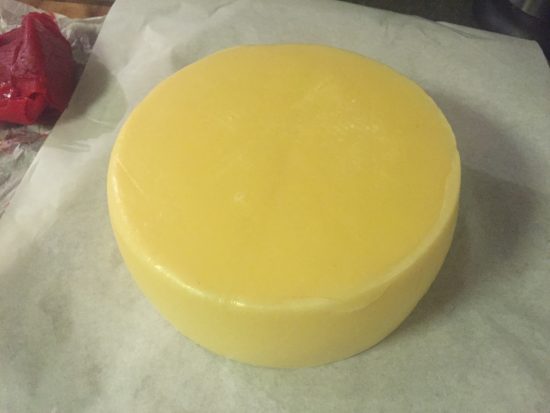 The Edam was a great cheese to make.  It had some quirky steps that I’d never come across before like washing the curd, so it was good fun.  Here is the Edam video and full recipe so that you can have a try as well.

Then I made a Havarti the next day, which is not quite ready to show you, as it still has some steps remaining before I wax it for maturation.  It should be ready for further aging on Sunday. 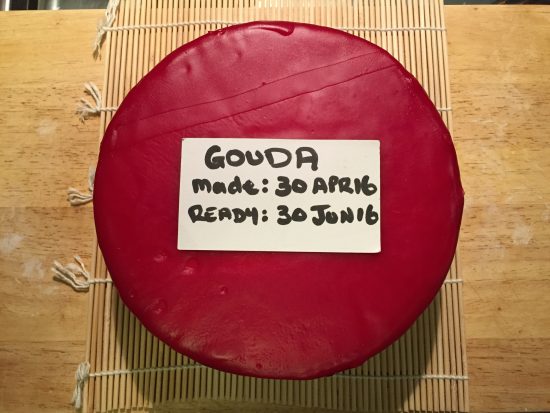 The next cheese was Gouda.  It was another attempt at this dutch cheese that was a dismal failure back in 2009.  I just hadn’t got the courage up to try it again, but I found a new recipe to work with, and I believe it turned out well.

The video that I took during the process is not quite ready, so please subscribe to my YouTube channel you will get a notification when it is released using the button below.

After all that cheese making, I had a lot of whey left over, so I decided to try my hand at Norwegian Whey Cheese or Mysost.  Yes, another cheese!

It’s pretty simple to make.  All you do is bring the whey to the boil then simmer for about 6 hours until whats left is thick and gooey.  Then you add a pinch of cinnamon and allow to cool and set.  Essentially it is all the leftover protein and lactose so it’s quite sweet.  Delicious on toast for breakfast.

So much cheese making fun.

On to gardening.  Autumn has been a disaster in some ways.

It’s been hotter than normal so that means that the cabbage moths are still breeding.  So much so that all my Cauliflowers and Broccoli seedlings were decimated, and given to the chooks as a snack.

I’ve needed to water so much, and we’ve also had little rain which is unusual for autumn.

However, on the other side of the coin, we’ve just picked the last of our summer crops which just kept on going.  We have the last cucumber in the fridge crisper, and a small bowl of tommy toe tomatoes still being used for snacks and salads.

We also had a couple of unexpected Australian Butter Pumpkins that grew out of compost. 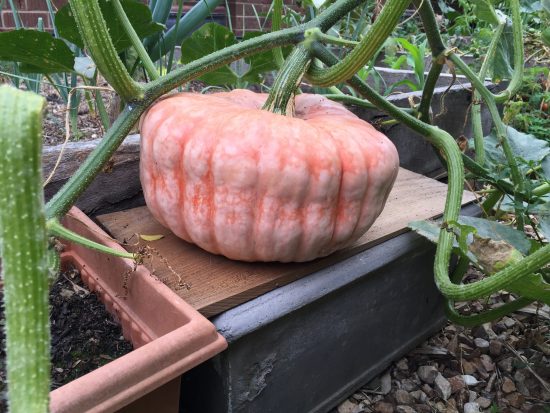 Here is the one that I had been keeping the snails and slugs off.  They didn’t like the cedar shingle that I sat it on, which was a surprising deterrent. 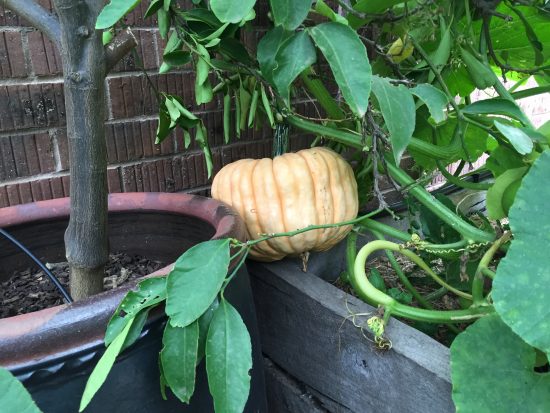 The other one, which was a bit sneaky, grew in the Tahitian lime tree until it got too large and snapped a branch off and fell down.  Naughty pumpkin! 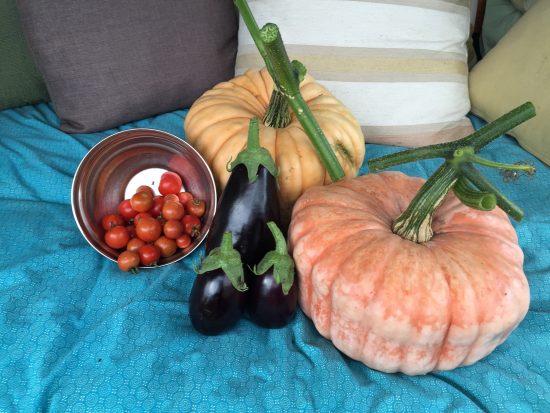 Last of the summer harvest

We also picked a few eggplants which we gave away because Kim and Ben don’t like them.  I know, criminal because I make a mean Moussaka.

Another thing that happened was that our solar PV system went on the blink for a few days. 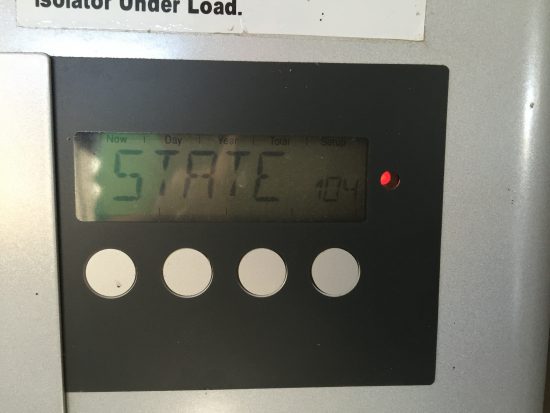 The error on the inverter caused me to call my installer, Energy Matters, who I found out were bought out by Sun Edison.  They were helpful and were about to send out a qualified solar electrician when the system started working again.

It wasn’t the system at all, but a drift in the grid frequency by a few Hertz.  You see, all grid tied inverters check the grid frequency before starting up, expecting about 50 Hz.  Apparently this happened to so many people in our area who had PV that the distributor finally fixed it.  Not much we could do about it except wait until it worked again.

I think I might start looking at battery systems that I can add to my system to store some of the excess to keep our night-time grid usage down and help alleviate this issue should it occur again.

So there you have it.  Pretty hectic hey?

We have more workshops over the next few weeks, so the weekends are pretty full.  I don’t expect that bee to stop being busy anytime soon!