The Sustainable Living Festival is one event I never miss.  This year was no exception.

Ben, Amy and I were team Webber this year.  We caught the train into the city, had a quick vegan breakfast at Lord of the Fries, and walked over to Federation Square where the event was being held.

The very first thing that I couldn’t help notice was the Tesla Model S.  At a princely sum of ~$150,000, it looks like I will be waiting a little while longer before I upgrade from my Honda Hybrid to one of these babies! 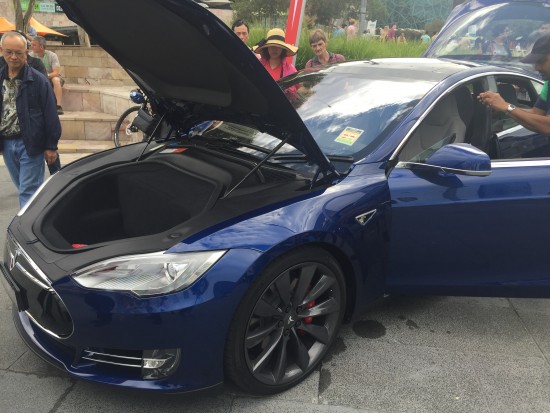 Great looking car, one of the safest I’ve seen, and that is from a bloke that’s not into cars at all. 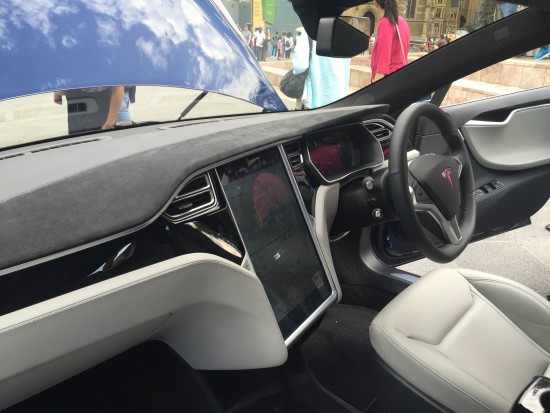 Anyway, a man can dream.  It would certainly be carbon free running if plugged into charge at my place! 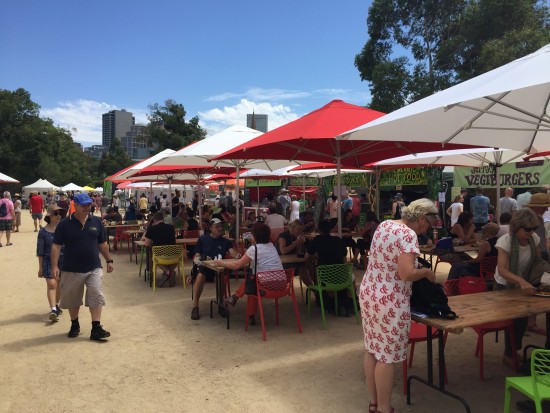 There was the usual food market that catered for vegetarian and vegans.  As always the food for lunch was delicious. 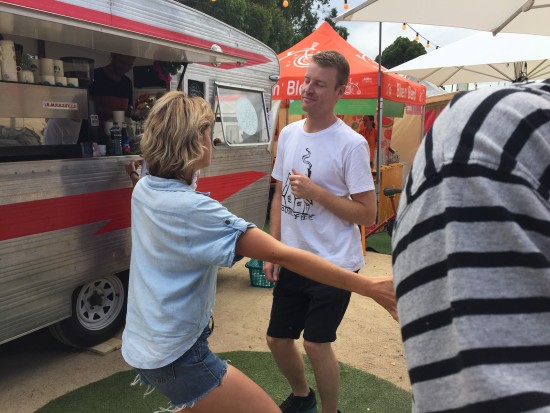 There was even dancing at the coffee van.  Very cool, and not a disposable cup in sight.  All crockery was collected and washed on the festival and the hot water used to wash up is solar of course!  They think of everything at the SLF. 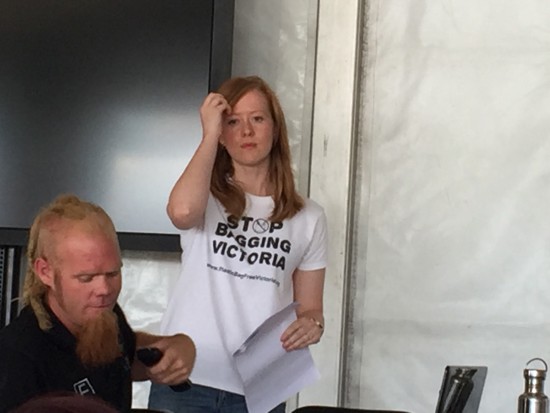 One of the reasons we chose the Saturday to visit the SLF was because Erin Rhodes from The Rogue Ginger was giving a talk about her plastic free and zero waste lifestyle.  You may have seen her on the telly and in the paper over the last few months, however you heard her first here on my podcast!  Have a listen to Erin again on TGoG 113.

Anyway, her talk was a hit and it was fantastic to listen to her journey in person. 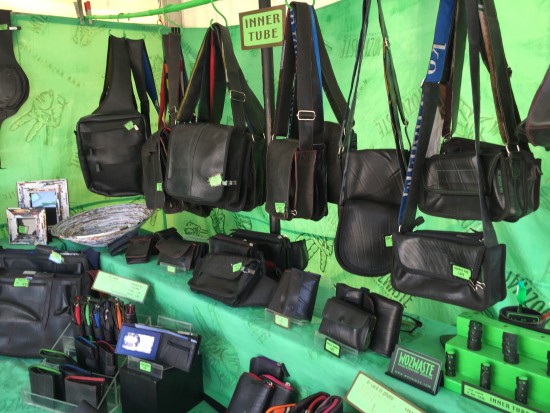 Next we visited the long line of vendor and Non-profit stalls in the Green Market Place.  One in particular that caught my eye was WozWaste.  Some great items upcycled into all sorts of new products.  I liked the bags and Amy loved the jewelry. 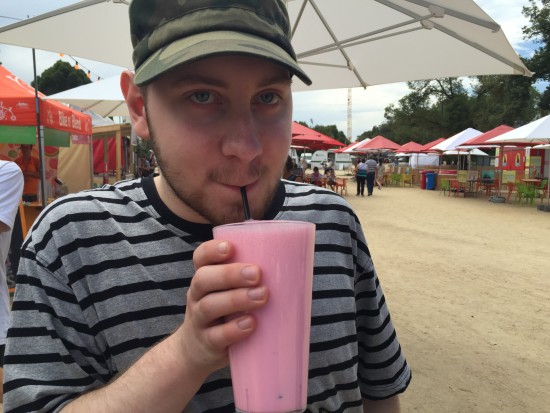 We had been giving Ben a bit of pocket-money for helping out at our workshops, so he lashed out and bought an organic strawberry milkshake.  He told me that it was the best milkshake he had ever drunk. 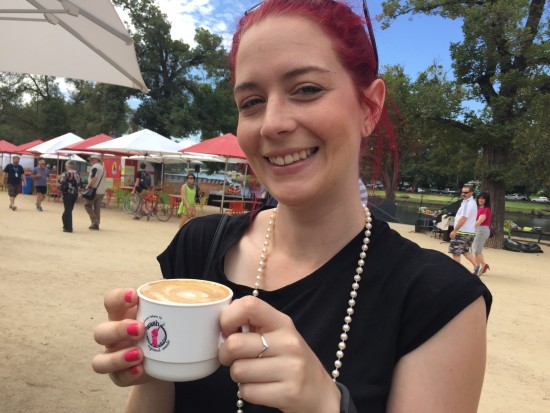 Ben was so flushed with cash that he bought his sister Amy a Soy Flat White, which she said was delicious.

We had a great day and as always it recharged my sustainable living batteries for another year!  However, one thing I did mention to Amy was that because it was my 9th year of visiting the Sustainable Living Festival, it was beginning to feel a little same same.  A real sense of deja vu lingered with me for the entire day.

Maybe it is because I’ve implemented so many of the things that are presented and talked about.  Mind you, I’m no eco-warrior;  just an ordinary bloke trying to do the best he can in the ‘burbs.

Maybe I should apply to talk next year.  I will have to think of a ripper of a topic though.

A twist on the old Jerry Maguire line, but that was how Ben and I felt when we visited the Macedon Sustainable Living Festival at Woodend yesterday.  It was fabulous!

Truth be told, I saw a young girl with a badge with that quote on it and liked it so much that I had to repeat it here.

As the festival title suggests, the sustainable living festival was a showcase of all things sustainable living.  I was very impressed with the size of the event, even though it was so far out of Melbourne.  It was a good substitute for the SLF Big Weekend that is usually held at Federation Square, but it was bumped off by the International Cricket Cup that took over the venue.  It’s just not cricket.

Anyway, we arrived at 10am, paid our token entry fee and chatted to so many cool people and ate lots of great vegan food.

But the highlight for me, and this may sound a bit morbid, was to discover a coffin that was perfect for a guy like me. 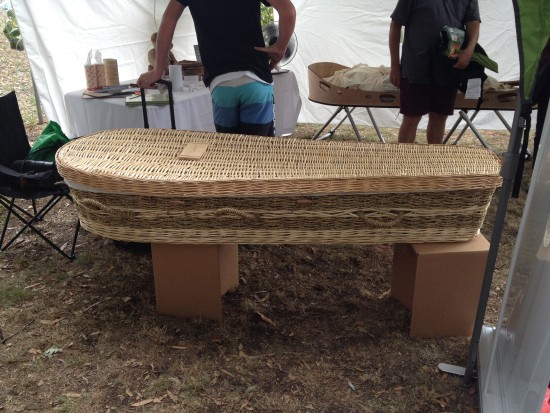 Yes, it is a big wicker basket coffin.  Let the entire world know that when it is my turn to say goodbye, this is what I want to laid to rest in.  Simple, practical, and it won’t cost the earth.  If you are interested, you can find further info at naturalgrace.com.au

Don’t get me wrong, there were other interesting exhibitors, like ecoMaster, Seed Saving groups, BioChar, Under the Branches to name a few. 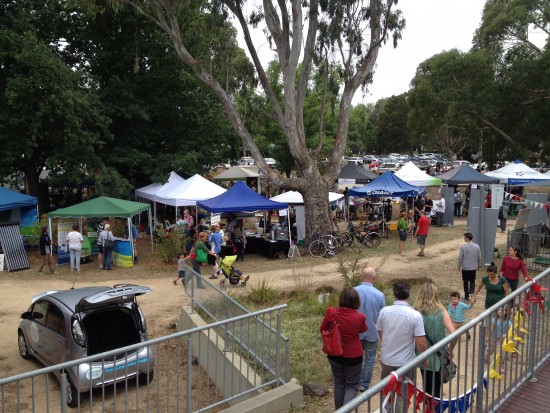 Ben’s highlight was Edgar’s Mission where he got to talk to Timothy the Wether.   It was fun to watch them both having a chat. 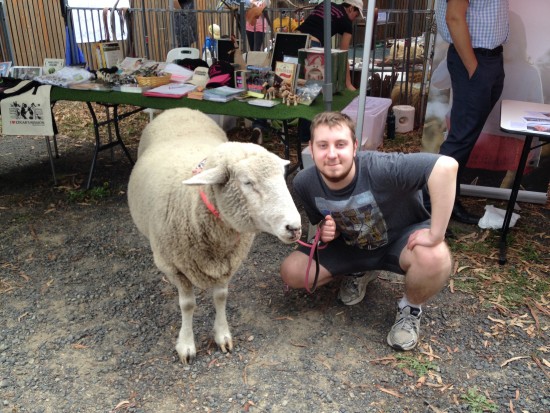 Timothy the Wether with Ben Webber

I am not sure if Timothy was that impressed, but he seemed happy enough.

Whilst waiting for one of the presentation (which actually got cancelled), we decided to go for a walk around Wooden.  Down one of the back streets we found a little shop, more like a mini-mart called Nature’s Garden.  It stocks 100% quality Organic Produce.  I bought a large organic Royal Gala apple that tasted amazing, and Ben couldn’t understand why there weren’t shops like this everywhere.

In fact, on the way home that was all he talked about.  It impressed him so much that it was the first thing he told Kim about when we arrived home, how Nature’s Garden was so cool, and that the mini-mart on the corner of our street should be just like it.

All in all, we had a great day, talked to some very interesting people, and enjoyed some fresh air and good food.