Kim and I spent a good three hours doing one of our favourite things.  In a lather!

What was that, I hear you ask?  Well, we were producing homemade soap of course.  Keep your minds out of the gutter, you naughty boys and girls!

We recently paid our chemical manufacturers fee to the Government, and the great news is that we can now make soap for sale.  We last made soap about six weeks ago, which is now cured, so it was high time to make a few more kilos of soap so that we don’t run out.  Not run out in the sense that I will have to whip down the shop and buy some Imperial Leather for personal use, but because we hope (fingers crossed) that we will sell out fairly quickly.  We have more than enough handmade soap for personal use, and haven’t purchased any since we first started making it in 5 years ago.

We still stay true to our own original recipe using Olive oil, Rice Bran oil, Sunflower Oil, and Coconut oil.  Just the right mix of bubbles, lather, and hardness for us, and great on sensitive skin to prevent eczema, which I am sometimes prone to on my elbows. 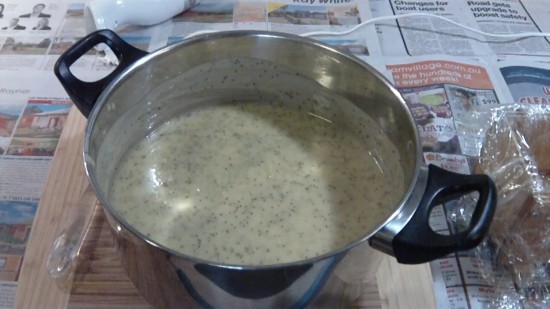 The first soap was a 1 kg batch with no additives.  No fragrance or colour, only natural ingredients including Poppy seeds as an exfoliant.  This was a custom order for one of my friends at work. 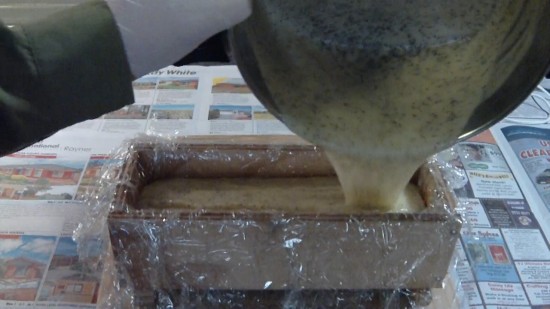 Pouring it into the small 1 kg mould was a breeze.  I used the spatula to remove every last skerrick of soap from the pot. 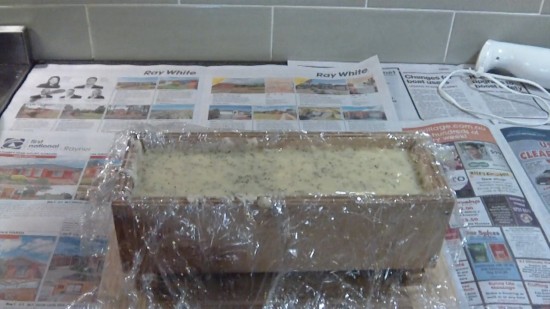 Soap in the mould

Once tapped level, we cover the mould with a cardboard lid and wrap it in towels to allow for the soap to cool slowly over the first 24 hours to prevent gelling and discolouration. 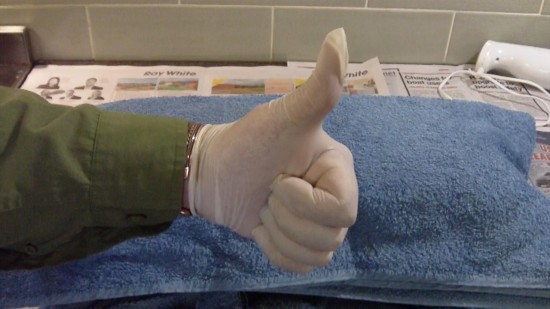 The first batch got a big thumbs up from me.  Kim didn’t even realised that I had finished as she was concentrating on preparing for the next batch.  It was to be what she calls her chunky confetti soap. 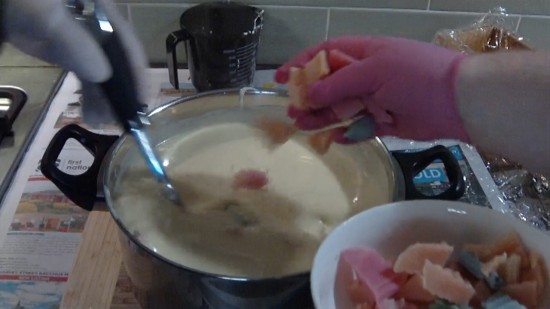 To the batch, Kim added a bowl full of old soap chunks that she had previously cut. We find that when you first get to trace is the best time to add the confetti, just before pouring into the mould.  This eliminates any air bubbles if you were to push the chunks into the soap if it was already in the mould.  It saves a lot of hassle. 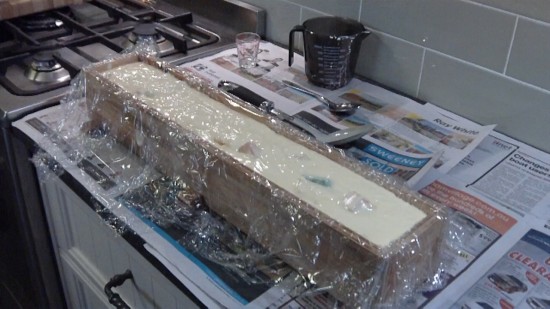 Once the chunky mixture is poured into the mould, we then level it by tapping, then add chunks of coloured soap from previous batches to top dress it.  The chunks are mainly from the ends of large blocks that we keep for such a purpose. 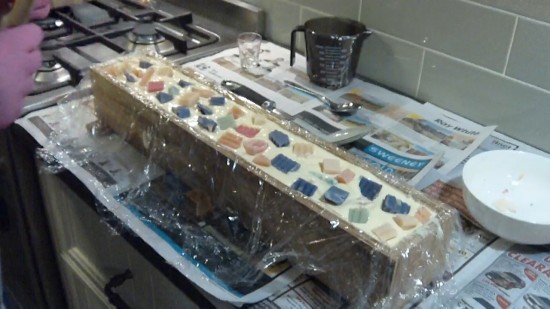 The finished product looks amazing.  We then add a cardboard top and then wrap in towels.  This larger 2 kg batch was poured into one of our larger moulds.  Good for making lots of soap in a hurry.

The final batch was a pinkish poppy-seed scrub soap, that I don’t have any photos of.  It is a surprise!  Suffice it to say, it will be up in the online shop in about six weeks time after curing.

So there you have it.  Three hours well spent.  Once cured, all that remains is saponified vegetable oils.

We love our homemade soap, made from vegetables oils, lye, and water, cured slowly and lovingly.  We will take all of these out of the mould in a couple of days, whereby I will put up a few more photos to show you how it all turned out.  And of course I took lots of video footage so that I can make a few short videos for the business blog, so watch out for that soon on the site.

How many of you have taken up soap making at home?  I bet your friends and family can’t get enough of your wonderful creations.  I know that every time our kids visit, they raid the soap storage box for a few bars!