As this is the last day of my holiday, I thought it would be nice to share some of the little things I have been doing around here during the past week.

I was just saying to Kim that I cannot remember when I felt so relaxed.  Thankfully I had the forethought and planning to set the blog in auto mode over the first part of the holidays, so that you all received interesting and relevant information whilst I was kicking back here on my staycation.  Hope you didn’t mind!

So on with the show. 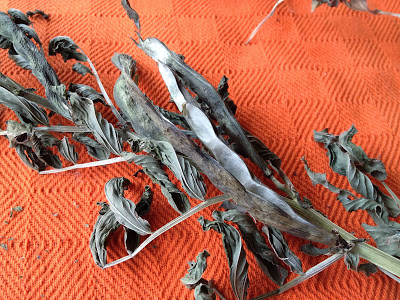 The four broad bean stalks that I had hanging upside down in the carport were ready to collect the seed from.

It is a fairly simple process.  Open up the blackened pods and remove the very dry beans.  Sort out the small from the large, and keep the biggest for next year. 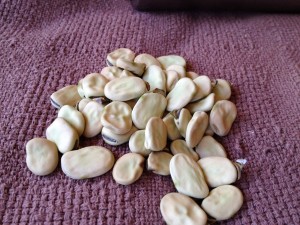 I think I have enough seeds for next years crop.  They are now safely stored in a glass jar, away from moisture until autumn planting time comes around. 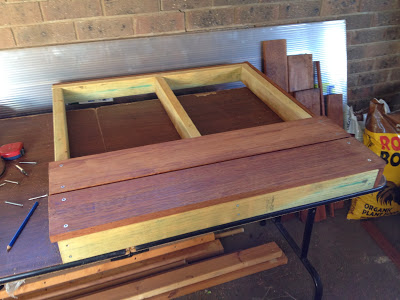 Kim had asked me to build an outdoor shower base so that she can use it after a swim.  I have lots of timber laying around so found the right sized off-cuts and put one together. 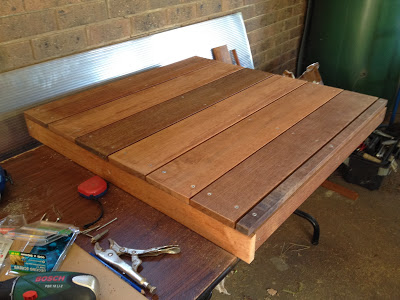 Here is the final product, with dressed sides covering up the pine frame.  I used stainless steel decking screws to fasten it together, so it should stand the test of time. 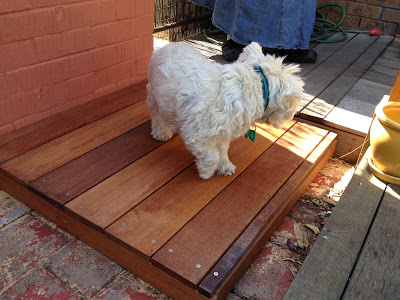 Look, even Teddy approves of his new morning sunbaking deck (shower base)! 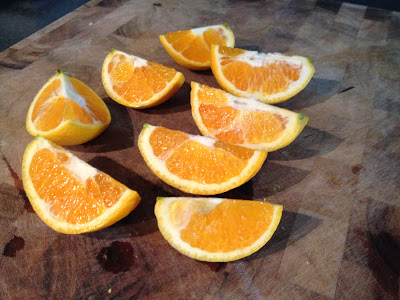 Also, I thought it was high time to harvest the two navel oranges that I managed to grow this year.  I was a bit hesitant, but once I cut them open I was delighted.  The sweetness and flavour was amazing.  Freshly picked, homegrown navel oranges are worth the effort.  There are a lot more growing on the trees this year, so hopefully a bigger crop with be ready about this time next year. 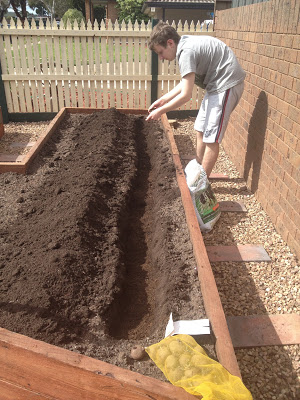 Remember this picture from September.  It is of Ben planting Desiree potatoes with lots of dried cow manure.  Fast forward to this week….. 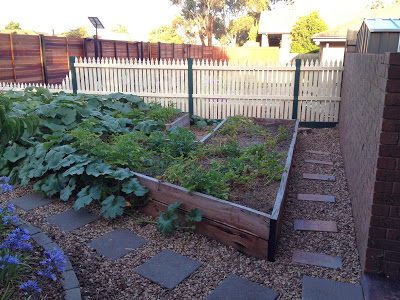 This is the bed today.  The Desiree plants are dying back, and are ready for harvest.  The Pontiac spuds to the left of the L shaped bed are still growing strong. 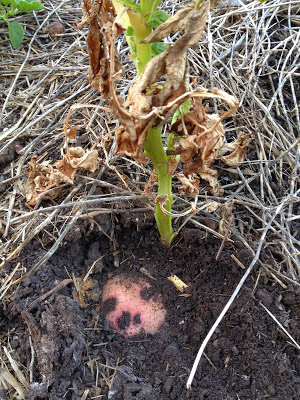 Here is a peek at the base of one of the plants just under the surface of the soil.  I covered it back over after taking the photo to stop it going green. 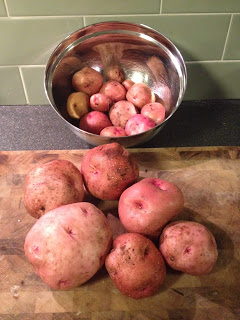 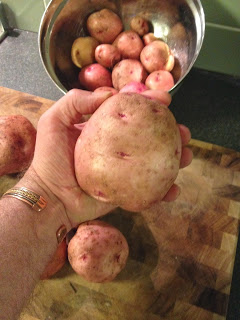 Over the last few days, I have been harvesting spuds from the plants that had died off.  This little haul (2.9 kg) was from only 3 plants.  My experiment of keeping just one eye on each seed potato seems to have paid off.  These are some of the biggest spuds I have ever grown.
Since the first few plants, I have harvested another 3 kg from two more, with many more still waiting in the ground.  Probably the best place for them until we need more.
We have been enjoying the really large fist sized 400g spuds as jacket potatoes with home grown red onion, a little bit of butter, and grated Cotswold cheese.  They make an amazing meal! 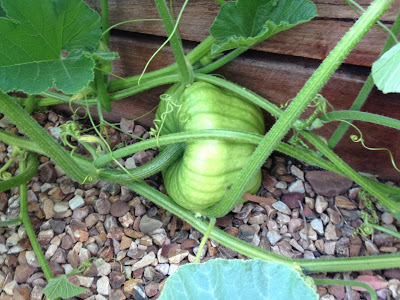 Whilst not ready for harvest, the Queensland Blue pumpkins are growing well.  I did an audit this morning and found five about this size (soccer ball size), with many more waiting for pollination.  Herein lays the problem.  For whatever reason, there is a lack of bees around here, so I have been pollinating by hand.  It is a relatively task, but I would rather nature take care of this for me.  Bee hives are definitely needed sooner rather than later!

Each morning I keep a vigil, looking for more female flowers ready to tickle with a male flower.  Sounds a bit rude but it needs to be done if I am to maximise this harvest. 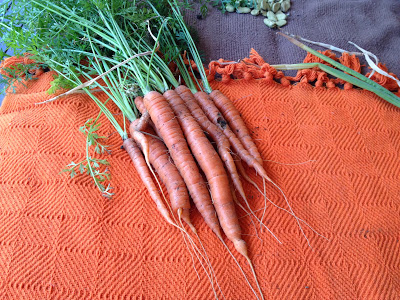 And finally, some carrots.  These were some of the longest I have grown, and even though the tops were small, the hidden carrots was about 20cm long.  A bit of a bonus as I thought I had dug all of these up.  I used them all in a vegetable curry, which was delicious.

Over the last two weeks we have been spoilt by all the home harvest.  In the carport, laid on a large tressel table is my crop of red and brown onions drying out.  They are a bit iffy mainly because too many of them grew flower heads which affects the storage life of the onion.  Mind you, they will still get eaten.  We will just remove the tough core before cooking with them.

The garlic has been getting a flogging in meals as has the dried herbs I saved after trimming most of the oregano, sage, and rosemary bushes.  Even though fresh is much stronger, dried herbs comes in handy during the winter when growth slows right down.

The few apricots that grew were eaten before Christmas by parrots which was disappointing, however we managed to pick about 20 ANZAC Peaches off the other tree before they got to them.  Delicious as always.  I have yet to net the nectarine and golden peach trees, and need to get my act together with the Jonathan apples as well.  Sounds like a job for my down-shift day on Wednesday!

Well dear readers, that should bring you up to speed with going-ons at the House of TGOG.  Lots more fruit to pick, and veggies to tend during the next few months.  Looking forward to fresh tomatoes, cucumbers and zucchini soon.

So, back to work tomorrow, fresh for the new year ahead.

Who else had a relaxing staycation at home?  Did you manage to fit in a few projects or gardening?