Yes a wild claim, but true.

I have had to remove all cheese from my cheese fridge and put it into the normal refrigerator until the weather cools down again in Autumn.  With the cheese fridge hovering at a temperature of 25°C during our record breaking, anthropogenic, climate change induced, heat wave over the last few weeks, it is not working as it should.  I hope the cheese recovers!

All is not well in the land Down Under.

“On Monday, the highest average national temperature ever recorded was exceeded – the record now stands at 40.3º C (104.5º F). That’s the average temperature across an area the size of mainland USA! It may well have been broken again yesterday, but the BOM haven’t released the figures yet.”

That is just mind boggling.  To show that this is some serious stuff, our Bureau of Meteorology just added new colours to the standard temperature map on the high end of the scale. 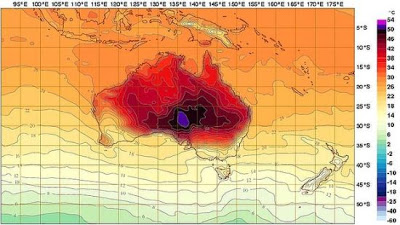 So what do media commentators have to say about our extreme temperatures?

Well, most media outlets are keeping people informed about bushfire dangers around the nation, which is great and welcome, but not mentioning much about the potential cause of climate change.

However most of these articles are inundated with comment threads of point and counterpoint  which has become the norm in our online media outlets.  This thread is from the Sydney Morning Herald;

We shouldn’t be surprised that all the climate change deniers are out in force today. It’s really simple guys. The planet is warming, no argument about that. Is it caused by human activity/ Maybe. But why would we as humans not take sensible steps like reducing CO2 etc so we don’t exacerbate the problem. Deniers should be ready to explain to their grand kids why we did nothing.
– Alex

Just like all the climate change hysterics are out in force to eh Alex.
Please post meaningfully or not at all
as for laying down the guilt trip re grandkids that really is scraping the bottom of the barrel
– Jill

Jill – almost all climate scientists agree that there is serious change in the earth’s climate. These changes are considered by the experts to lead to increasing weather extremes and catastrophes. The evidence is strong and growing stronger that it is a result of air pollution caused by humans. Those who don’t believe it are unable to produce evidence to the contrary but nonetheless do what they can to stop action being taken. But we are not allowed to blame them for this – do I have that right?
– yeah-no

Seems meaningful enough to me…better than half truths funded by the fossil fuel lobby and their horde of willing dopes.
– pugwash

Alex – seeing as you believe so strongly in global warming, what are you doing to address this terrible threat to humanity? As far as I can telly you are sitting in front of a computer that is churning out a nice amount of hot air and adding to the problem.
– Terry

@gavin – climate change is a worldwide phenomenon. You can’t use hottest days on record in one spot, it tells you nothing about global climate. The world’s hottest year was 2005 and hottest decade 2000-2009.
– Baby it’s warm
Read more: http://www.smh.com.au/environment/weather/live-nsw-braces-for-one-of-the-hottest-days-on-record-20130108-2cdfn.html“[End Quote]

This type of dialogue is not uncommon in the press anywhere I suppose.  However, the vast majority understand that the science is sound, and we have created climate change, much to the annoyance of our biggest polluting industries.  It is a global phenomenon, not just restricted to Australia.

You only have to look at records broken in North America in their summer this last year, and record polar ice cap melt, and record melt in Greenland to name a few.

At least the Prime Minister gets it.  Or does she?  The Australian Government still subsidises the fossil fuel industry to the tune of $10 billion a year.

Check out a recent episode of Democracy Now! The interview with Anna Rose from the Australian Youth Climate Coalition is very good as well and highlights the extreme weather events around Australia over the last few years.


However, for the icing on the cake, George Monbiot had this to say in his latest opinion article.

“Climate change denial is almost a national pastime in Australia. People such as Andrew Bolt and Ian Plimer have made a career out of it. The Australian – owned by Rupert Murdoch – takes such extreme anti-science positions that it sometimes makes the Sunday Telegraph look like the voice of reason.

Perhaps this is unsurprising. Australia is the world’s largest exporter of coal – the most carbon intensive fossil fuel. It’s also a profligate consumer. Australians now burn, on average, slightly more carbon per capita than the citizens of the United States, and more than twice as much as the people of the United Kingdom. Taking meaningful action on climate change would require a serious reassessment of the way life is lived there.”