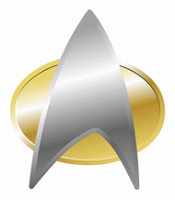 Last night, Kim and I watched Star Trek – The Next Generation.  This TV series always brought to light topical issues of the day, and some still stand the test of time, even though it was produced in the 80’s.  This particular episode was called True Q.

Anyway, back to the story.  This episode had a sub plot, which most episodes do, about a planet-Tagra IV-whose inhabitants had, over time, polluted their atmosphere which had caused environmental damage (aka climate change).

The Tagran’s solution was to use many baristatic filters to scrub their atmosphere, rather than cleaning up their industrial waste polluting it (geo-engineering).

The problem that the crew of the Enterprise faced was to make repairs to the generators supporting some of these filters.  In the end these generators failed, putting the lives of the crew and the inhabitants in great peril.

So, in true Star Trek style, the problem was solved by the wave of an omnipotent being’s hand (a member of the Q Continuum).

However, during the dialogue, one of the crew asked, “Why don’t the Tagrans’ simply fix the original problem and stop emitting the pollution?”  Deafening silence…..

Yes, why didn’t they just fix the root cause?  What a novel idea!

Unfortunately we may be headed for the same fate unless the inhabitants of our planet, aka Human beings, do something to drastically reduce our own pollution problem, in the form of greenhouse gasses.

We have no such omnipotent saviour able to click their fingers to magically reduce our atmospheric and oceanic pollution.  Well none that I know of.

No matter how much wishful thinking we direct at the problem, it is just not going to happen this way dear readers.

Wishful thinking like saving our cities with higher sea walls, or adding iron filings to the oceans to increase algal blooms (which drawdown CO₂), or sowing the atmosphere with sulphates, which deflect some of the sun’s rays away from Earth.  This type of thinking will not help us, and may cause unforeseen planet wide side effects.

Only direct action such as reducing fossil fuel usage to zero, drawing down billions of tonnes of CO₂ via reforestation, and restoring natural habitats like mangroves (to reduce storm surge effects), will address the contributing cause of global warming.

This contributing cause of elevated greenhouse gas emissions is not my friends, the true root cause of our problem.  The simple fact is that we, the human race, with our growing environmental footprint upon the surface of the planet is the true root cause.  Our growth-at-all-costs economy is slowly killing our planet.

Like the Tagrans in Star Trek, we seem to be unable to even discuss the problem like adults at a governmental or intergovernmental level, as the recent US Presidential elections have demonstrated quite clearly.  The subject of climate change seemed to be taboo, let alone discussion about our environmental footprint.

One glimmer of hope came during the acceptance speech last night, where Obama vowed to fight to ensure the nation “isn’t threatened by the destructive power of a warming planet.”  At least he mentioned it, I suppose, which is more than anyone did during the election campaign.

We as a race are nowhere close to winning the battle against anthropogenic global warming.  In fact, a recent report by PricewaterhouseCoopers, concluded;

“The global economy now needs to cut carbon intensity by 5.1% every year from now to 2050. Keeping to the 2°C carbon budget will require sustained and unprecedented reductions over four decades. Governments’ ambitions to limit warming to 2°C appear highly unrealistic.”

This means that as governments fail to act decisively on their own, we need to be setting the example, spreading the skills to the masses, and continue to pressure people in power.  People like Obama and our own conservative representatives here in Australia, with pushback on every single bad decision that would only cause more pollution and suffering in the future.
When they make a good decision, we congratulate them.  I know that we can do it, especially when folk like Bill McKibben from 350.org are leading the way.
Our ‘business as usual’ trajectory is not an option for the future, unless we want to end up like Tagra IV.  I don’t want to end up desperately trying to geo-engineer our way out of this mess, do you?

Let’s just fix the cause, and not the effect at this stage of the game!