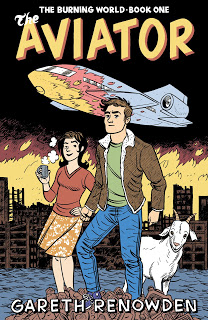 I stumbled across this recently published book as I was listening to an episode of Radio Ecoshock, where Alex Smith (the presenter) was interviewing Gareth Renowden who co-hosts a podcast called The Climate Show.  I bought it straight way at the iBookstore, but should have purchased directly from the author as he would have gotten a bigger slice of the pie.  Sorry Gareth.

Anyway, Gareth was given the opportunity to promote his book, The Aviator which he describes as  ;

“Flying around a world battered by rapid climate change and struggling with economic collapse in a hi-tech airship, Lemmy encounters the remnants of our civilisation – the artificial intelligences searching for the singularity, a rocking bishop in his flying cathedral, the last climate sceptics, the technovegans and deep green terrorists, billionaire libertarians in their bubble, and much, much more. Not to mention the goats, the girlfriend with bots in her head and the elixir of life (which is cheese).”

I was attracted to it right away, because it mentioned two things that I am passionate about.  Climate Change and Cheese!  How the two go together is well worth picking up a copy for just for that.

The story centres around the main character ex Californian Lemmy and his airship, the Thunderbird, who travel around this ravaged world.  The Thunderbird is the shell of a body for the Artificial Intelligence, called Jenny, who has a thing for old movies and historical figures.  The story is told by both main characters, and it was very interesting reading from Jenny’s point of view.  It gave a lot more depth to the story than otherwise would have been there if it had just been told from Lemmy’s side of the tale.  Did I mention that Jenny the AI likes pirates?  Aarrr.

From what I can figure the book is set around 2030-2040 from various comments throughout the book, however a specific date is never given (it could be a little later).  I believe that is because the author tried to steer away from having the story compared to a prediction of sorts.

The description of a post climate change world was eye opening.  It was well researched as to what may happen if we do not take climate action soon, and stop using our atmosphere to dump our waste.  With a melted Arctic Ice Cap, a Greenland void of ice, methane fires in Siberia, and violent global weather patterns, it was the stuff of nightmares.

However, dystopian future aside, the story keeps you flipping each page, and the adventures that Lemmy and Jenny have together are varied and wondrous.  They travel from their base near Nelson, New Zealand (after all, the author is a Kiwi) to what is left of the USA, to northern Canada, across to Greenland, over part of the North Pole down to Russia, to China, and Melbourne, Australia.  Wait until you find out what happened to Australia!  It is not difficult to imagine either given the droughts, bushfires and floods that we are already experiencing at the beginning of climate change.

Introduce a foxy lady in the form of Lemmy’s love interest Kate (also from Nelson), and throw in a  jealous AI, and things get really interesting.

Without giving away any more spoilers, I found the story enthralling, entertaining, humorous, chilling in places, and believable. It was also a definite page-turner. I couldn’t put it down once I started and it took me a day to finish. Normally a work of fiction would take a week or two to get through, especially then it weighs in at over 100,000 words.

It even featured goats, with magical cheese, and they even stumble upon what is left of the Heartland Institute which has a hilarious twist.

Well written, well thought through, and well edited.  This book is a must read and well worth the asking price of US$4.99

The Aviator, the first in a series set in The Burning World, is available from in multiple formats from Smashwords, iBookstore US, UK and AU, and on Amazon

for Kindle and in Paperback ($US15).  You can read more about the author here.

I can’t wait until Part Two is published and I know it will be well worth the wait.