Thanks to all those who left a comment on Monday’s post.  It took me a while after I wrote it to realise that I do actually teach lots of people how to grow food via this blog.  I suppose what I was referring to was teaching people in my family, and our local community.
I am the only person in our family unit that has the detailed knowledge of what to plant when and how.  The older kids know how to construct things, like garden beds, greenhouses, chicken houses, of which they have all helped, but none of them have really shown too much interest in the food side of things.  I know that the day will come that they ask me to teach them the skills, so I wait.
As for Ben, who is just starting that teenager phase, everything is a chore.  Even spending time with dad in the garden is a task in itself.
So to start the education, or The Greening of Ben, if you like, part of Ben’s school day was spent out in the veggie patch with me being the teacher.  As I have been ill for the last five days, and just recovering now, it was a good time to go hands free and let the lad do the work. 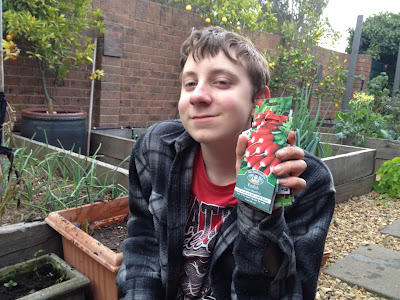 Here is Ben looking very excited about his horticulture lesson.  He is holding a bunch of seeds that we selected, that I found in my seedbox that were well past their sow-by-date.  If nothing grows from them, no problem really, because I was going to throw the packets away this season anyway.

We found quite a few pots around the yard that were bare.  So Ben wheeled them around with the trolley, and we dug in a hand full of blood and bone, and a little dynamic lifter into each pot and watered them well. 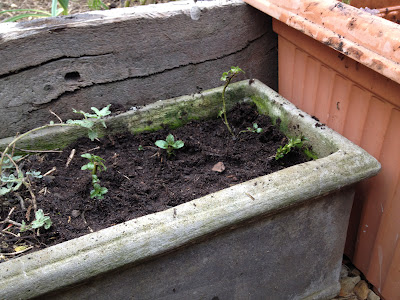 Firstly, I showed Ben how to propagate Peppermint.  We dug out a little of the root from another pot with peppermint just starting to regrow, and he transplanted it into this grey pot.  Like all mints, it will flourish in no time. 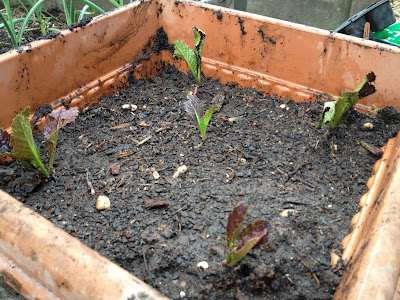 Then on to transplanting some red mustard greens that a friend had given me about a month ago.  I had them sitting in one of the citrus pots getting irrigated, so thought it was high time to teach Ben how to transplant out of a punnet.  I showed him how to do one, then he planted the rest. 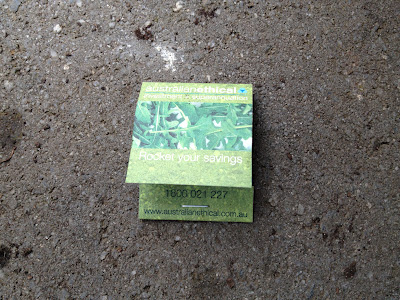 Then I found some Rocket seeds in these nifty little packs.  They look like a book of matches, but within each ‘match’ are seeds. 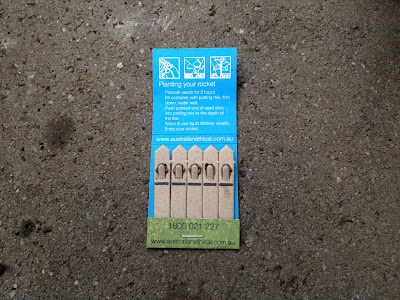 The black line on the match shows how deep to plant them, and the point faces down in the dirt.  The packet suggests that you soak the matches for two hours, but we plonked them in some water for only and hour as it was getting close to dinner and the light was fading fast. 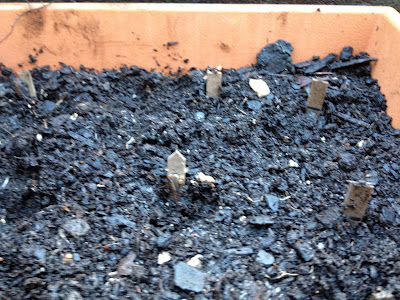 Here is the planted Rocket seeds, and I have just noticed the one is upside down!  They should grow, as Rocket seeds germinate quite well. 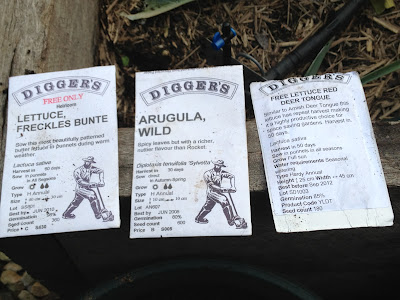 Next it was some pick-again lettuce.  These are some of the packets I had, so once the pot was prepared, I directed Ben to sprinkle the seeds on top of the soil. 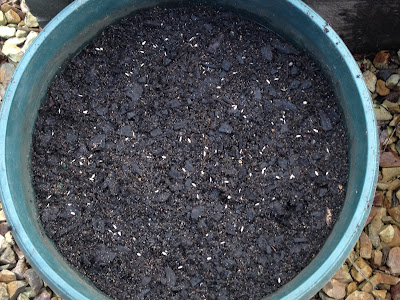 Then I showed him how to finely sieve some sand over to just cover them.  Lettuce needs light to germinate, so you can either leave them on the surface, or very lightly cover with a fine sand. 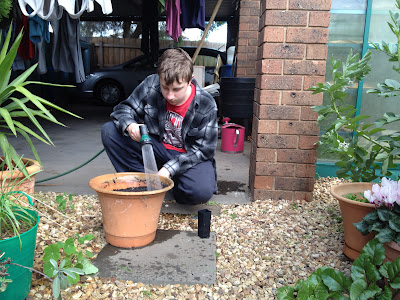 We ran out of pots, so I had a look in the greenhouse and found some potting mix in tubes.  Ben tipped them all into this large pot and rehydrated the potting mix.  He added blood and bone and mixed it all in.  He then planted the radish seeds into it. 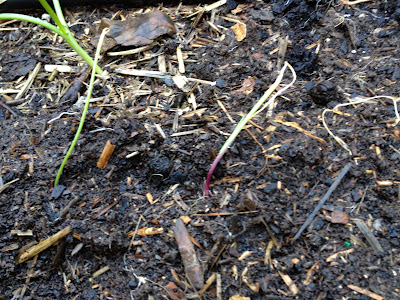 I found some red onion seedlings that I had also neglected, so Ben planted pulled out some spent sprouting broccoli and gave it to the chooks, then planted the seedlings in their place. 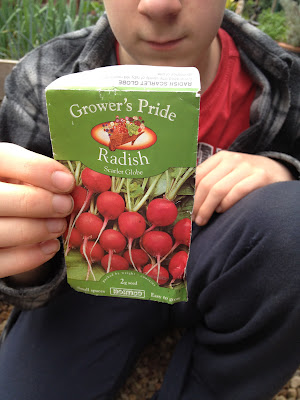 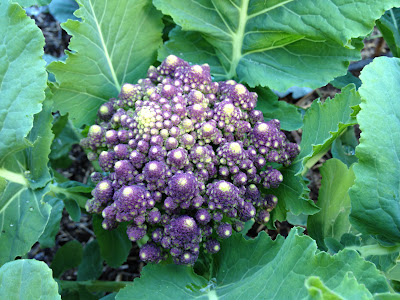 As for the rest of the garden, I have one head of Romanesco broccoli still growing, and nearly ready to harvest. 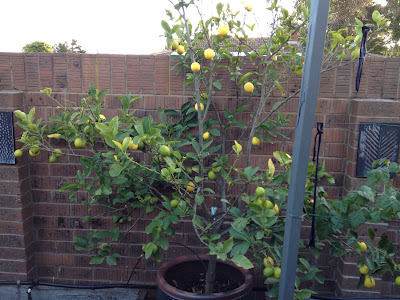 The tahitian lime tree is fruiting well, and we are picking a few a day. 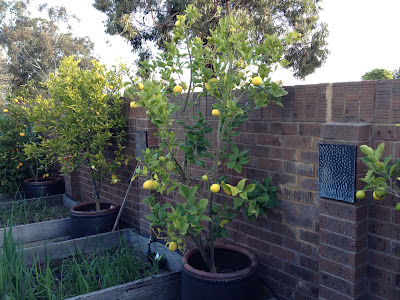 The meyer lemon has big juicy lemon on it, and are ready for harvesting. 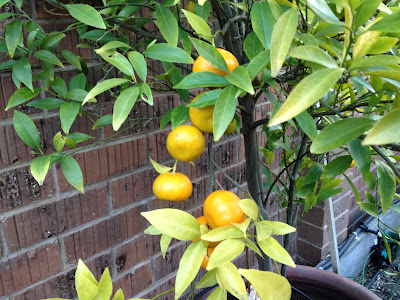 Mandarins are nearly ripe, and need a little more fertilizer by the looks of the yellowing leaves. 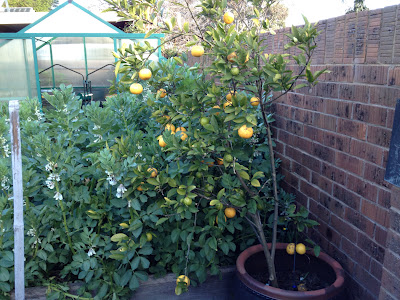 And finally the lemonade tree  is ready to harvest, and the broad beans are outstanding.

So as far as teaching Ben some of the methods I use, then I believe he learnt quite a lot.  We are going to plant some more on Sunday as I have many more pots.  By then the radishes should have sprouted, so it will give Ben some encouragement to sow some more seeds.  Even though he begrudgingly attended the lesson today, I feel that we got a lot out of it.  It was hard not getting my hands stuck into the work, but I resisted the temptation because Ben would not have learnt the skills otherwise.

A few more years and I will make a green thumb urban farmer out of him.  I think it will start to click when he harvests his own produce and cooks it himself.

What do you think, off to a good start?