Those who read regularly will know that my son, Adam is living in Cologne, Germany.  He has been sending me a renewable energy story when he travels around the countryside, and this story amazing.

He was about to fly to Venice (a birthday present from his girlfriend Sina), from Airport Weeze when across the tarmac he spotted this solar array (double click to enlarge) 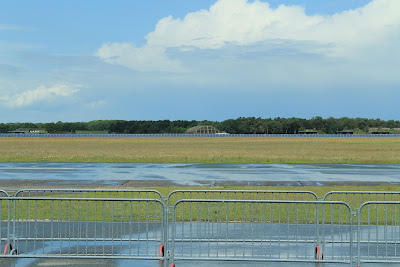 I took the liberty to zoom in for a close up.

He had stumbled across the largest solar installation in his state of North Rhine-Westphalia.  Adam had this to say about it, “I was pleasantly surprised that across the far side of the runway, braced up against the old Luftwaffe hangers was this (see pictures).  I couldn’t get the whole array into one picture frame but it runs from one end of the runway to the other, which is long enough to 737-800 planes to be taking off on.”  Quite an understatement as you will discover as you read on!

The press release that I found on the airport’s website has this information about the array;

“Since December 2011 the largest solar power station in North Rhine-Westphalia is in operation at Airport Weeze. The station has an output of approximately 14 megawatt and generates around 13 million kilowatt hour electricity. This equates to the electricity used by approximately 3,300 four-person households. At the same time more than 8,500 tons of carbon dioxide (CO2) per year is saved.

100 % of the renewable electricity is supplied to the net according to remuneration rules of the feed-in tariff (EEG); however, a large part is being used directly at the airport. With its solar power station the third largest airport of NRW already complies today to standards which are required in conjunction with the energy transition policy by 2050.

The photovoltaic facility was created on a 300,000sqm large area to the north east of the airport grounds which comprises 6 million sqm. The extensive grounds which are characterised by its watch towers and bunker systems were until the 1990s part of the former British Air Force base.

60,000 polycrystalline solar modules were installed on the solar field area which covers 42 football fields. The biggest photovoltaic system in North-Rhine Westphalia was created in record time. Up to 120 employees have installed 2,000 table-shaped frames and mounted solar panels. Altogether 87,000sqm modular surface convert sunlight into electricity, which flows via 280 km of cables from the facility to the inverter stations which are as large as a garage. To protect the site a 3,700 m long fence has been erected around the facility.

Now, Adam’s photos do not do it justice.  This is what it looks like from the air.

Look at the size of it.  I have never seen anything quite amazing (Double click to enlarge these two photos).

In fact it puts most installations to shame.  The Germans know how to install solar PV with flare and in a scale that makes a difference to their energy mix.

Now if these reports from the Aussie lad in Bundesrepublik Deutschland can help with influencing our policy makers, we may start to get somewhere with our renewable energy targets here in Australia.

If the Germans can do it, why can’t we.  We have twice the amount of sunlight falling on this great brown land, but no political will to harness it.  I am sure we can do something better than the handful of small installations we currently have installed.

What an amazing way to reduce carbon emissions on a grand scale.  I would rather live next to this or a wind farm, than a stinky old coal fired power station any day.  Bring it on team Australia, and stop with the crappy reversal of renewable energy targets and policies.

How are we even to begin to ramp up to a clean energy future if business keeps getting inconsistent messages and continual policy degradation from state governments in this country?

Buggered if I know!