I have been wanting to try this for years, ever since I tasted home cured olive at my mate George’s house when I was about 12 years old back in my home town of Loxton.

I have three very small olive trees, but I have yet to produce my own fruit as they are just not mature enough.  Combined with the fact that I just love olives whether they be green or black, I just needed to get my act together and give it a go.  I have noticed many places around our town that have olive tree laden with fruit, and they were just sitting there going to waste, which seemed like a crying shame to me.  What to do?

Well first I had to learn to cure olives before I approached anyone for their surplus.  So when we visited Talbot Farmers Market, I visited the olive man and asked him if it was easy enough to cure olives.  He rambled on a little but I got the gist of it, and it was enough to whet my appetite and seek other curing recipes. 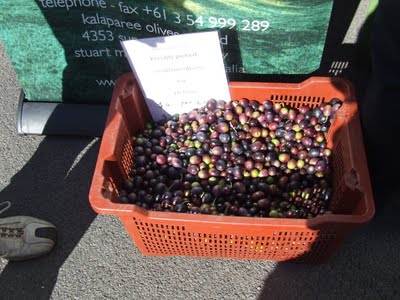 I purchased 1kg (2.2lb) of Sevillano Olives and took them home.  After a bit of research I found that there were a few ways to cure olives, one in brine, one in water then brine, and one in lye.  I chose the one in water and then brine method as the Sevillano olives are mostly green all the way through, even though they look black, which is a bit deceiving for a beginner like me.

So here is how I went about curing my olives (click to enlarge photos).

Firstly I disregarded any with bruises and blemishes and threw them in the compost bin. 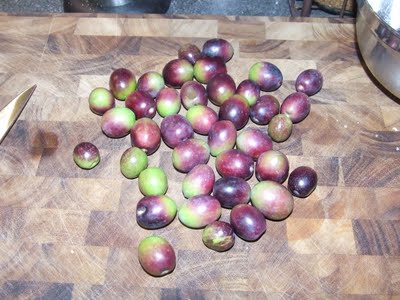 I separated what I thought was the green from the black, as the recipe calls for different soaking times. 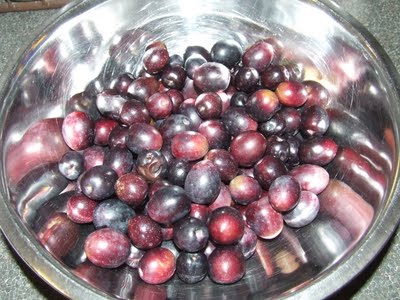 Next I used a sharp knife to make a cut lenghtwise on opposite sides of each olive to quicken the soaking process.  Try not to cut into the pip.  The soaking process removes most of the bitterness from the fresh olive, and anyone who has tried to eat a raw olive will attest to its horrible bitter taste. 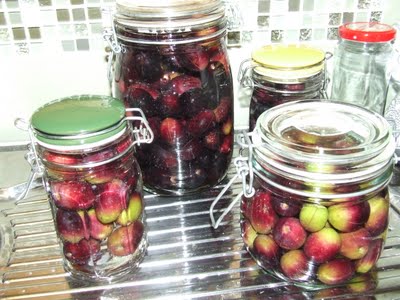 So in clean and sterilised spring clip jars, I placed the black and green olives (black at the back and green at the front jars).  Then you simply fill each jar to the brim with tap water and then clip down the lid.  By ensuring that some water leaks out when you clip it down it is fairly certain that all the olives are entirely immersed.  Change the water every day, which is easy with this type of jar.  Just release the tension on the clip and drain the water.  Then fill up again to the brim with tap water.   The recipe I used said that you soak black olives for 4 days, and green for 6 days, however I found that both were too bitter still for my liking and discovered that the black ones were really green olives in disguise!  I soaked mine for 14 days until I was happy that most of the bitterness was gone.  If you get a little bit of scum on top of the water some days, don’t dispair as this is normal. 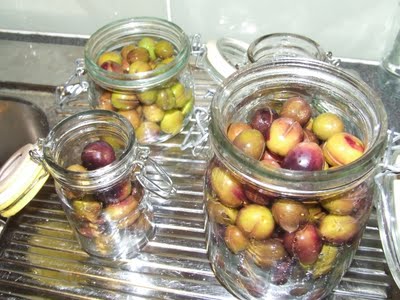 Above is the final olives and you can notice that during the soaking process the blackness of this type of olive turned green.  So on to the next stage, which is the brineing. 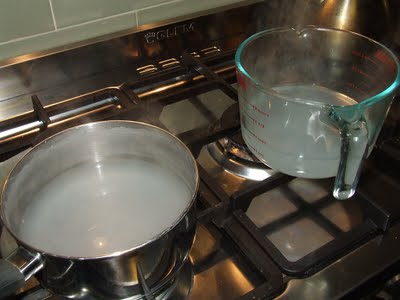 I added two thirds of a cup of salt to 2 litres (~2qts) of water and heated it until disolved.  Then transfered to a pyrex jug to make it easier to pour into the jars. 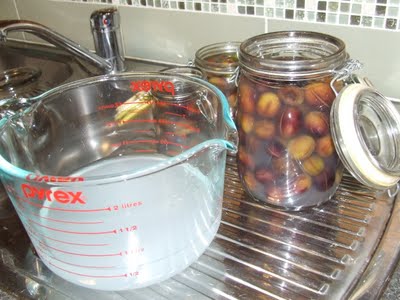 Fill your jars up with brine to just covering the olives. 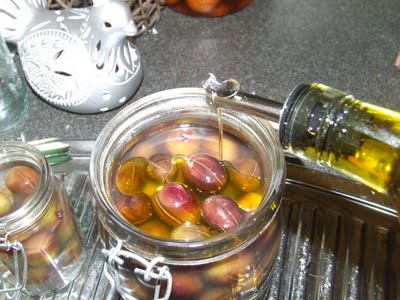 Some may floats still, so to make it impervious to air, cover with a little olive oil.  About 5mm will suffice, enough so the oil is a single layer floating on top. 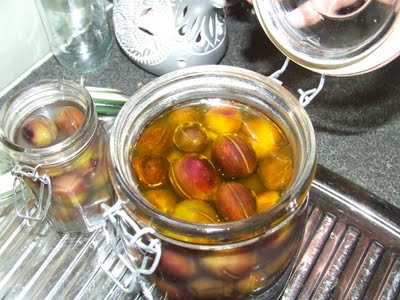 Then seal the lid with the clip.  I left about 1cm clearance so that there was no spillage when I sealed it. 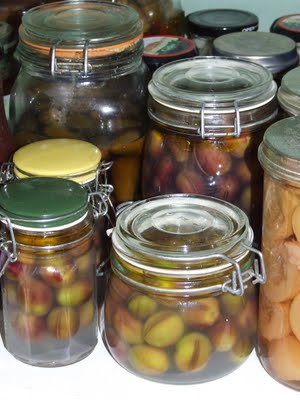 My recipe called to leave these jars for 5 weeks.  After waiting period that they are ready to eat.  Time will tell.  I will sample some mid June and let you know the verdict.  Apparently they can store for up to six months like this in the brine, but they last even longer if stored in olive oil.  I don’t think that they will last that long if they taste yummy.  Ben also loves olives, so it will be a fight to the last one!

Next year, I will ask around and barter for a 10kg bucket of olives from friends and see how we go from there.  Until next year.