Last week and a bit was big.  I mean really BIG.

Saturday 9th of October, our family visited Geelong and specifically the Ecofest.  It was a great day and we looked at all the market stalls and sat in the church and listened to Andrew Lucas from Transition Town Bell, who talked about the Transition movement.  It was a great presentation, informative and I asked lots of questions.  Then we watched a 30 minute documentary about the movement and some of the things it has achieved so far.  If you want to learn more visit the Transition Network website.

Then it was my turn to speak on the subject of “My Green Epiphany”, which was quite ironic seeing that I was delivering the presentation in a church.  I would never have thought four years ago that I would be giving a green sermon about my green awakening on holy ground.  Anyway, I enjoyed myself and I believe the crowd of 12 people did as well.  They kept asking questions for what seemed like ages, especially ones about cheese.  You should have seen their eyes light up when the slide about cheese making came up on the screen near the end of the presso.  It was amazing.  I was even beginning to think myself that was there no end to this blokes talent.  Not trying to big note myself (well, maybe a little), but it is not until you are 45 minutes into a presentation and it hits you that you have travelled a long way in the last 4 years.  It is amazing what you can put your mind to when you really are driven and willing to learn from trial and error.  Many thanks to Andrew and Alicia Ryan for inviting me to speak on the day.

Sunday 10th of October.  I tidied up the garden and put down two batches of beer to ferment.  Cerveza and a Coopers Lager.  Then popped around to the neighbours house for a BBQ and some home brew. Nice.

Monday 11th of October.  I gave a edible gardening presentation at an aged care facility in our town.  I had a ball and they were a lively bunch who had lots of questions and even gave me some tips.  It was well received and they invited me back for another session on Friday.  Alas, it was not to be as I had to return to work on Thursday.

Tuesday 12th of October;  We had a class of teenagers visit from a local high school.  They wanted to learn about sustainable living in the suburbs, so where better than to have a tour around my humble abode.  The kids were very talkative, and asked some pertinent questions like “How many kWh does your PV system make on average?”, and some not so pertinent questions, like “Why are you chickens so sexy?”.  All in all good fun and I hope they learned something.

It was also Ben’s birthday party.  Here is a picture of the fantastic chocolate cake that Kim made him. 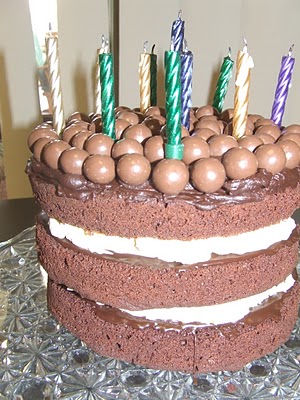 The cake was so yummy.  All home baked except for the malteasers on top.

Wednesday 13th of October; Rest.  I did absolutely nothing for a change!

Thursday & Friday; Back to work Gav, your two week holiday is over!  I was so knackered after each day that I just went to bed early each night.

Saturday 16th October; I bottled 46 litres of beer which cost me about $35 to make.  Quite a bargain when the average carton of beer which contains only 9 litres costs $50!  It took 3 hours to bottle all of it, but well worth it, and ready to drink in about 3 weeks time.  I think that next time, I will just put down one batch at a time.  Afterwards, my neighbour Rick and I took a trip to the home-brew shop in Sunbury.  We were like a couple of school kids in a lolly shop.  I bought two kit beers with extras, so will be putting them down over the weekend to come.

I also did a bit of gardening just to tidy up for a special visitor who turns up this Wednesday with a film crew.  Announcement later on in the week!

Sunday 17th of October; Garden work which included mucking out the chook house.  What joy, and a bit smelly after the heavy rain we had during the week.

After talking to the girls for about an hour and laughing at their antics, I waxed the Pyrenees with green peppercorns, and while I was at it, decided to wax the Parmesan as well.  I want to see what difference it makes in texture as I have only oiled my Parmesan cheeses in the past. 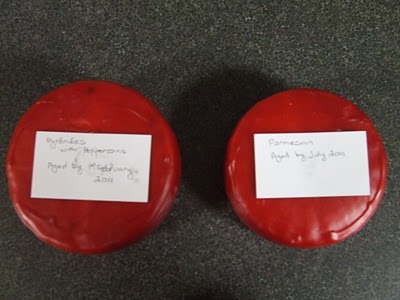 As you can see by clicking on the picture, the Pyrenees will be ready in February 2011, and the Parmesan in July 2011.  It seems so long to wait, but from experience it is well worth the wait.  Luckily I have a Caerphilly that is ready in two weeks time!

It was also Megan’s birthday, and we had a small party for her.  I prepared her requested dinner of spaghetti and meatballs.  All home made with the meatballs and pasta sauce made by yours truly.  A great evening to cap of a very busy week and a bit!

And the big announcement.  Vasili of Vasili’s Garden will be visiting on Wednesday to film an episode of his show in my garden.  Ben is taking the day off of school to participate as well.   We are all very exited here on TGOG suburban farm.  The show usually airs the week after shooting, but I will let you know when I find out closer to the date.