Well so far I am not impressed by either of the two major parties in the up coming Australian Federal Election.

I have been waiting with baited breath for the Labor announcement, and was sorely disappointed.  With an already delayed ETS postponed until 2013, this is the policy we are meant to believe will reduce carbon emissions enough to limit CO2-e to 450ppm and keep global average temperatures below 2 degrees of warming.  350ppm is what the real target should be but no western government seems to be aiming for what the science tells us is required.

An extract from ABC on-line: 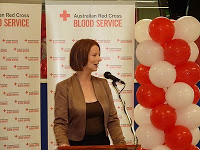 “A re-elected Labor government would ask a new “citizens’ assembly” for climate change advice, under a key part of the ALP’s new climate change policy set to be launched by Prime Minister Julia Gillard today.

The ABC understands Ms Gillard will outline plans to set up a committee of scientists to advise the Government on climate change.
The committee will be paired with a citizens’ assembly, consisting of 100-200 volunteers who will gauge feeling of the community on its attitude towards putting a price on carbon, and feed it back to the Government.”

WFT???  Another bloody committee?  Sounds like the 2020 Summit all over again that was simply a gab fest, and another tactic to delay on real action on climate change.  I could have drafted an better policy in my sleep.  I though that the Federal election was the ‘citizens’ assembly’.  I know where my vote is not going to go.  This citizens assembly has already confirmed via feedback on this blog and many others that people of our country want action now.  Just get on with it Julia and stop piss farting around.

But wait there is more. As reported by The Age;

“Prime Minister Julia Gillard has promised standards that would ban the building of new “dirty” power stations – but her policy would not cover up to 12 coal-fired plants already proposed across the country.
Launching the first piece of a revised climate policy, Ms Gillard proposed greenhouse gas emissions standards that would rule out new brown-coal fired stations in Victoria unless they came with “clean coal” technology.
But the standards would not stop the development of new black-coal power plants in NSW, Queensland and Western Australia.”

12 more freeking coal fired power stations?  Why do we need more of these planet killing factories?  What happened to the massive investment in renewable energy.  We can power our entire country on renewables if you believe Beyond Zero Emissions, which by the way, I do.  We just need the political will power to make it happen.  The PM also announced;

*Introduce a Climate Change Commission of experts to inform the public about climate science and report on the level of international action to cut emissions.
* Reward industry that made early cuts by promising to keep emissions trading compensation at the levels promised last year.
* Invest $1 billion over the next decade in the electricity grid.

Even Kevin Rudd promised more in the lead up to the last election.

To be fair, lets look at the Liberal Climate Change policy as reported in The Age; 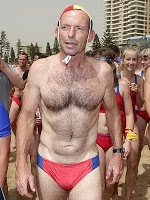 OPPOSITION leader Tony Abbott has hardened his position on climate change, declaring unequivocally there would be ”no carbon price on consumers under a Coalition government”.
The opposition leader’s tough line sharpens the divide on climate, which had narrowed when the Rudd government deferred its plan for emissions trading. Dismissing the likelihood of a binding global agreement to tackle climate change, Mr Abbott said the Coalition did ”not believe in artificially imposing a carbon price on consumers”.
An international deal to limit emissions was a ”most unlikely hypothetical situation” given it was ”very, very unlikely” India and China would deny themselves the opportunity to improve living standards. ”I say that you can be certain under a Coalition government that there will be no carbon price imposed on consumers,” he said.

So how will you be reducing carbon emissions Tony?  By shutting your mouth I hope.  Maybe some of that hot air will then not make it into the atmosphere!  That is not a policy, that is a cop out and a delaying tactic at best.  Saying that you will just sit back and wait for an international agreement is just climate suicide!  Someone has to act first, then others will follow.  Sound like a mob of sheep waiting for the first ewe through the gate before they all take off!

And now what do the Australian Greens have to say.  Listen to what Senator Christine Milne had to say on ABC AM this morning.  Not trying to be biased one way of the other, at least the Greens are openly stating that they will implement a price on carbon as a mechanism to reduce greenhouse gas emissions.  More than I can say for the other two parties.  Here is the some more of their policy as reported on the Australian Greens website;

At least they are clear and concise, and we know what they stand for.  De-carbonising our economy is a great step to lowing our countries emissions.

But don’t let me sway your decision with my green bias.  Vote for who ever you like, but just make sure you are informed about what each party promise they are going to implement in an attempt to avert climate chaos and a warming planet.