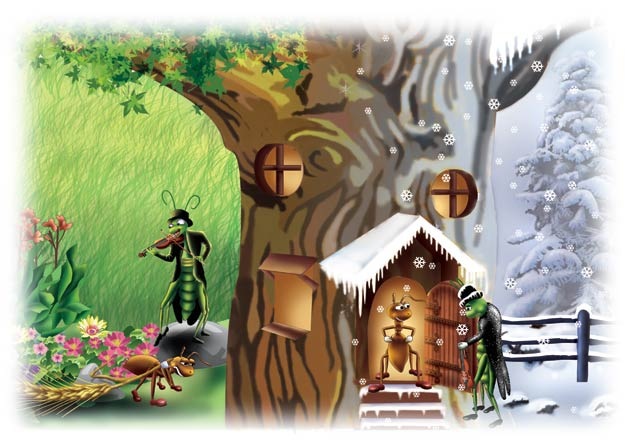 In a field one summer’s day a Grasshopper was hopping about, chirping and singing to its heart’s content.  An Ant walked by, grunting as he carried a plump kernel of corn.

“Where are you off to with that heavy thing?” asked the Grasshopper.

Without stopping, the Ant replied, “To our ant hill.  This is the third kernel I’ve delivered today.”

“Why not come and sing with me,” said the Grasshopper, “instead of working so hard?”
“I am helping to store food for the winter,” said the Ant, “and think you should do the same.”

“Why bother about winter?” said the Grasshopper; “we have plenty of food right now.”

But the Ant went on its way and continued its work.
The weather soon turned cold.  All the food lying in the field was covered with a thick white blanket of snow that even the grasshopper could not dig through.  Soon the Grasshopper found itself dying of hunger.

He staggered to the ants’ hill and saw them handing out corn from the stores they had collected in the summer.

Then the Grasshopper knew:

It is best to prepare for the days of necessity.

This Aesop’s fable has rung true many times in my life, but none more than it has since my green epiphany.  In my view this story has a much deeper meaning.  I feel that I am the ant, and much of the rampant consumerist society around us all is the grasshopper.  The grasshoppers of today don’t sing and dance, but spend on credit, and don’t give a second thought about saving for the future or about future events like climate change, peak oil, and energy decent, to name a few.  They just party like it’s 1999!

Will the proverbial grasshoppers of our time learn a valuable lesson before the hard times come?  How many will be knocking on the ant’s door?  When those hard times are upon us, what will you be?  An Ant who prepares and saves, or a Grasshopper who wants to buy and inevitably gets everything they touch, but needs none of it?

I believe that humanity has partied like the grasshopper, so hard and for so long, it has squandered much of the planets resources.  We have left a huge mess in our wake, and have left none for “days of necessity”.  Now is the time to be frugal and wise like the ant.  I personally have found that living a simple life, and treading lightly on the planet can offer such great rewards that most of today’s grasshoppers could never imagine.  How can they feel the sheer joy that goes with voluntary simplicity.  Complexity is a distant memory for me, with meaningful living here to stay.  The grasshopper in the story learnt a valuable lesson.  Work hard when required, and reap the rewards when the time comes.  Live within your means, and save for the future.  Simple really.

Look, don’t get me wrong.  I am not trying to push any type of lifestyle on anyone and not trying to be preachy.  Make up your own mind, the choice is yours.  I am just making a comparison of today’s social problems against a simple story written by a Greek slave more than two thousand five hundred years ago!

The story gives me hope that others will learn by example and will finally have an aha moment of their own.  If we can’t learn from the moral from this story today, even during a financial downturn, then when can we?