What a great morning!

As mentioned yesterday, our friends Stacey and Phil came for morning tea, and Phil presented me with the inaugural “Wombat Warrior Award”, which he made up himself. Here is a photo of the presentation ceremony in our front room. Phil is the guy that I have mentioned previously, who is going to ride a recumbent tricycle around Australia towing a trailer starting March 2009. Regular readers may have noticed that I have added his blog to my blog roll, Camp Quality Country Mile Tour, so we can all keep up with his progress. 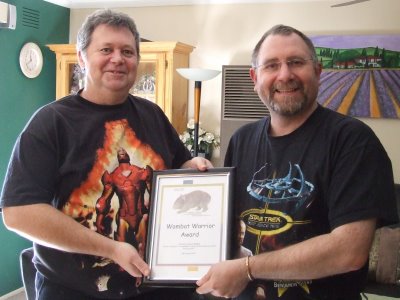 The wording of the award is as follows; Awarded to Gavin for his devotion to “Sustainable Living and the Protection of the Environment”, dated 6 August 2008. They also gave me a picture of Captain Planet, a “How to make your own Superhero costume” kit, and a book called “The Miracle of Mulch”, by Mary Horsfall. I can’t wait to read the book! I think I should have smiled for the photo, and could of had a shave, but I honestly didn’t expect photos today. 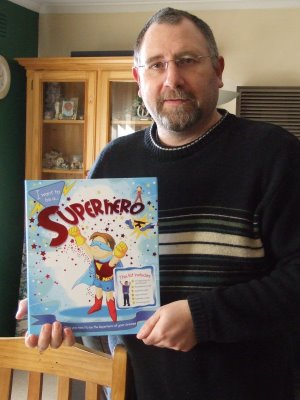 There is one condition to receiving the award. The recipient must find another worthy candidate in one years time, make up a similar certificate and add a little gift with the award. And obviously, a presentation ceremony goes without saying! It was really cool of Phil and Stacey to come up with the idea which is a fantastic way of motivating someone to strive to new lengths to achieve their goals. I think that if I meet anyone worthy of this fine award sooner, I may just issue it earlier, and will certainly keep this new tradition alive and well.

After much merriment, and a few cups of tea/coffee and biscuits, our guests headed off home. Kim went outside to collect the mail from the front yard. She took a little bit longer than normal, which I thought odd. I was only concerned, because Magpie nesting (swooping) season has just started in our area, with the birds keeping people away from their nests. It is quite funny to watch, but horrible to experience first hand. Kim usually takes an umbrella with her when walking Ben to school during this time of year, and opens it up for protection so it keeps her safe. I think that the Magpies have every right to protect their eggs and young, as would any other parent. I have only been hit a few times in my lifetime, and even though it hurts for a little while, it is the fright of being whacked on the back of the head unexpectedly that hurts more than anything else.

Anyway, the reason Kim was detained, was because she stopped to introduce herself to our new neighbour, Danni (sorry if I got the spelling wrong?) and her little boy Mason. She mentioned that her hubby Dale and her purchased the place a few months ago. They have been so quite that we didn’t notice much, but knew that someone had moved in. Maybe, I had just been going about my business of being green and recovering.

Danni mentioned that she wanted to start a vegetable garden and keep some chooks, and hoping not to sound too eager, both Kim and I invited her to have a look at our progress so far. I showed her the chook house work-in-progress, and the pea plants in one garden, then through the pool area to the main garden. Danni got quite a shock as we entered the next part of the yard, because she thought that the pea garden was the only one I had! After showing her all the different beds, vegetables, the worm farm and compost bins, she asked where I got my seedlings from. I mentioned that I grew them myself from seed purchased from the Diggers club, or just planted the bigger seeds in the ground, and have attempted to collect seed where I could. I promised that I would give her the advice she needed to get started, and to help her get into the swing of things. I recommended a good book to start off with, and this blogs address. She is probably reading it now, and wondering what she has got herself in for, living next door to a family who try to live a sustainable lifestyle and attempting to reduce our carbon footprint a little each day.

Don’t worry if we seemed a little eager, we are a harmless mob, and are just a family trying to save the planet in our own little way, and more than willing to show others how to grow their own food. It tastes better when you grow it yourself!