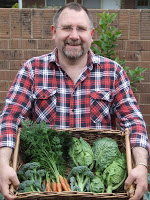 In November 2007, I had the privilege of being interviewed for an article that would be featured in a sustainability newsletter at work. I was interviewed for about an hour by a nice guy called Tony Wells. He heard about my exploits from my friend Jennifer. I thought it was a great way to spread the word about sustainable living, so I was very willing. We talked for what seemed like hours and I just kept coming up with more and more things that we had done around the house. Here is the article;

The greening of Gavin

What can one person do to help save the planet?

It’s a question Gavin Webber, asked himself after becoming aware of the dangers of climate change.

Gavin was inspired to take a stand by a work screening of the movie “An Inconvenient Truth”, in which former presidential candidate Al Gore describes the growing risk of global warming.

So Gavin went home that day and started a personal crusade to adopt a less carbon-intensive lifestyle.

He began by researching fuel-efficient cars and selected a Honda Civic hybrid. After purchasing the petrol miser, he admits his family thought he had “gone mental”.

“But with the way the planet is going, you’d be crazy NOT to invest in the future for your children,” he says, adding that a home screening of the Gore documentary soon convinced the doubters that Dad was on the right wavelength.

Next on Gavin’s green agenda was an energy audit of his home in Melton West, in ’s outer suburban fringe.

He was shocked to find his family were consuming an average of 30-kilowatt-hours per day of coal-fired electricity. That translates to more than 13 tonnes a year of carbon dioxide emissions, the main gas responsible for global warming.

Gavin’s response was to turn off the beer fridge in the garage, replace incandescent globes with compact fluorescent lights, switch off appliances at the wall when not in use, and wind back the operating time on his pool pump.

He also tossed out the electric kettle, after calculating the 2000-watt device used enough power making cups of tea and coffee each day to light his entire house for an evening.

Gavin now boils his new kettle on the gas stovetop for a morning cuppa, then pours the leftover water into a thermos for use throughout the day.

After six weeks focusing on energy efficiency, power use in the Webber household had been slashed by 65 per cent.

Now for the big one, thought Gavin. He saved enough money to install 16 solar panels on the roof, generating 2.8 kilowatt hours at peak charge. He also signed up for 100 per cent GreenPower with Origin Energy, so that whatever power the Webbers draw off the grid is offset by investment in renewable energy.

He also installed a solar hot water system, which has cut natural gas consumption by more than 70 per cent since June. And the Webbers offset any remaining emissions by purchasing 100 per cent GreenGas.

But wait, there’s more … with the energy issues conquered, Gavin’s focus shifted to the garden.

Conscious of the carbon cost involved in transporting food, he decided to grow his own.

There is barely a square centimetre of the Webbers’ average suburban backyard that hasn’t been converted to vegetable production.

He also has plum, peach and apple trees to supply fruit.

All are fed by three compost bins that cut waste to landfill, and are watered by a 2300-litre tank that catches rain from the roof.

Gavin takes his lunch to work in reusable containers to save on clingwrap and packaging. And he refuses to buy takeaway coffee because of the disposable cups.

Gavin is happy to share environmental tips for home and work. Just drop him an email.

The article was published in three different formats to suit the audience. Once in the Technology sustainability newsletter, once in the Cool Changers newsletter, and then to my surprise in an article called “Who Am I?” which is a monthly feature about a staff member. It is then posted on the internal intranet. It was quite a thrill to see my image for all to see.

Since the article was published I have had over 30 emails from other staff members from as far afield as India and New Zealand. They varied from a simple well done to detailed questions about photovoltaics and whether an electric kettle or a kettle boiled on a gas stovetop produced more GHG. I answered every email in detail and really enjoyed being the “Sustainability guru” for a few weeks. It also confirmed something to me. I realised that I did know a vast amount of information about sustainable living and energy efficiency and it helped me to stay focused on my journey. I also realised that my journey may never end, and that that would not be a bad thing.

Who would have known that when Kim and I made the decision to live a more sustainable lifestyle that we would affect and inspire so many people. I liken it to the “Field Of Dreams” effect. “If you build it, they will come”.