During her visit, my sister Teena was telling me all about her balcony garden on Bribie Island Queensland, which sounded very impressive. So impressive in fact, that I just had to bring her on to the show as a guest to talk about it.

Listen to the Episode Below (00:34:49)
Download Listen in a New Window iTunes Stitcher SoundCloud Leave a Review Clammr It Subscribe via RSS Subscribe on Android RSS Patreon

She lives over 1776 km (1103 miles) away from where I do in Victoria, so her climate is vastly different.  For example, she can grow tomatoes in the winter, which is unheard of down here except in a greenhouse. 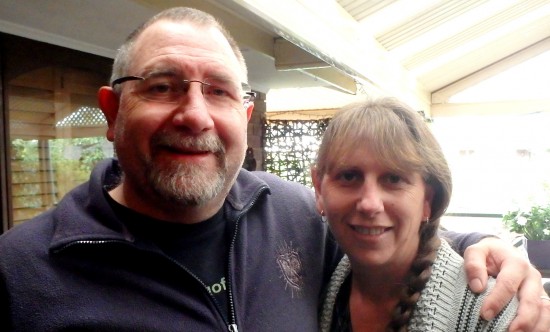 With many tropical and warm climate fruit trees in pots, and veggies growing in tubs, she supplements her diet with delicious home-grown food in her rented apartment balcony.

But that’s not all, there’s more to this episode than just balcony gardening.

At around the 26 minute mark in the show, Teena also tells me all about quilting .  I had no idea about this age-old skill, so she goes into a fair bit of detail about how she reuses old fabric and transforms it into something amazing.   You can catch her quilting skills over at her Facebook page, That Quilt Lady.  Show her some love if you are into quilting.

Here is a sample of her work; she has many more photos on her Facebook page. 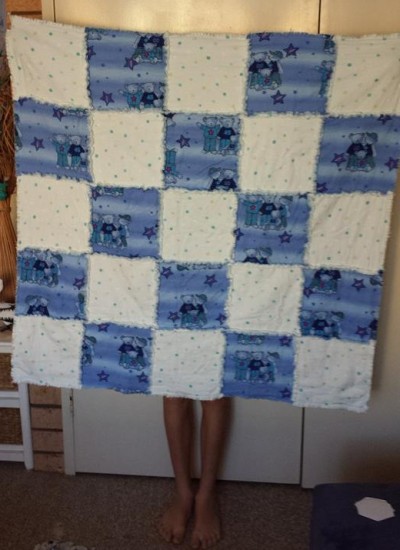 One of Teenas quilts.  Love the legs poking out of the bottom!

Until next time, stay green and keep keen!  One final thing if you please. I am sure Teena would like to answer any questions you have via comment where you can also thank her for a very interesting show.

About a month ago, Kim and I ventured into the giddy world of candle making.  So much fun, as it takes me back to primary school, when we used sand and old cardboard milk carton to pour molten wax into, to make candles.  So during this post, I am going to show you the process of making soy wax candles.

Kim bought a kit on-line which consisted of 2kg of soy wax, about 50 wicks and metal thingies and some colour discs.  We had saved lots of salsa jars which were just perfect for holding our candles.  Nothing quite like reusing stuff that most people would probably throw away or hopefully recycle.

We chose soy wax as it was more eco-friendly than paraffin, however we realise that it is not as eco-friendly as bees wax.  Bees wax was just too expensive, so we opted for soy.  Instructions came with the kit, however here is how Kim made them (click to enlarge any photo).

Firstly she crimped the wick onto the metal thing, and each metal thing had a sticker on the bottom to keep it from moving when the wax was poured in. 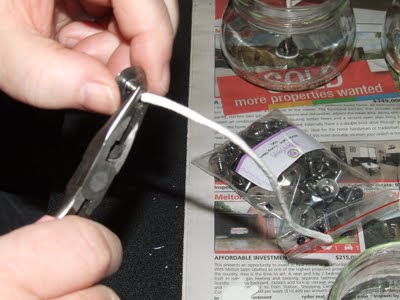 We then poked holes through some ice-cream sticks and threaded the wicks through them and placed them in the jars. 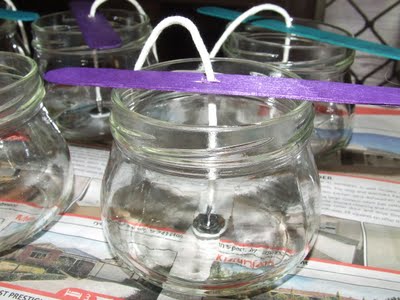 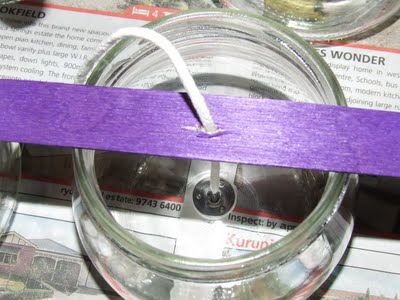 Kim then got out the wax, 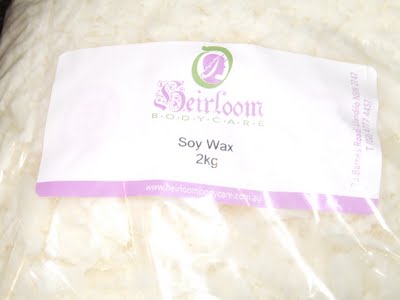 Placed about a litre in volume pressed down into a pyrex jug, 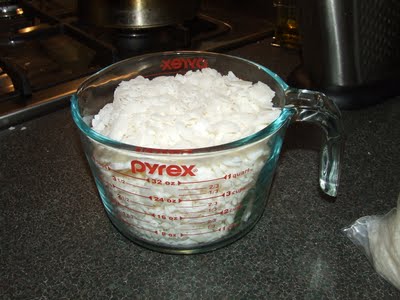 Then zapped it in the microwave for between 1 – 2 minutes, or until it melted and went yellow.  Note that once melted we got about 500ml of liquid wax. 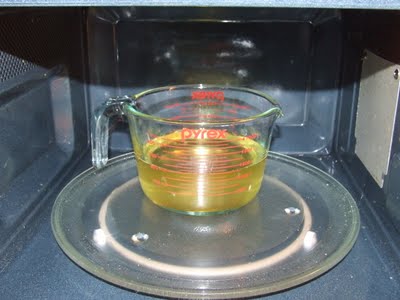 Then she took the jug out of the microwave, and whilst hot we broke a colour disk, 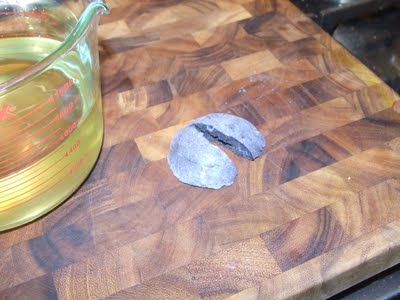 and stirred it into the melted wax.  We didn’t need to put it back in the microwave as there was enough existing heat to do the job. 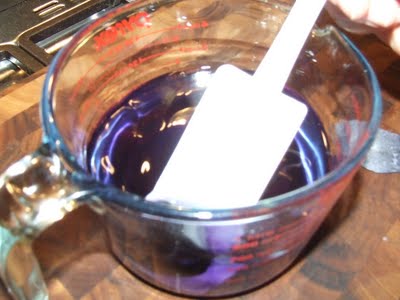 It looked very dark in colour, but the instructions said it would lighten when it cooled. 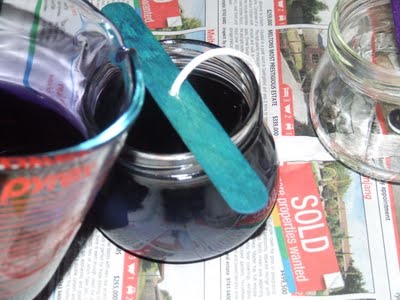 Gently, she poured it in, making sure that she did not disturb the wick. 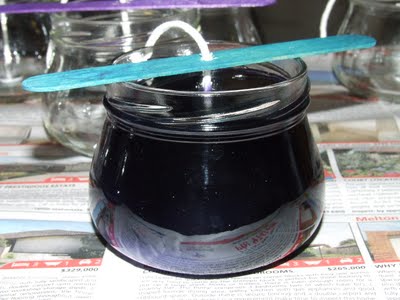 Kim poured it up to the lip of the jar, so that the wax had a well to melt into when lit. 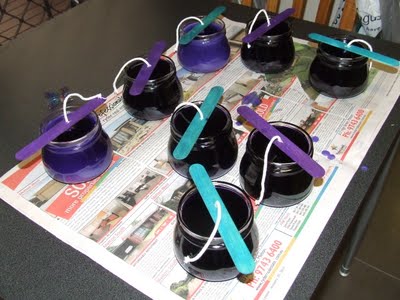 We filled up 8 salsa jars in this manner, and let them cool overnight.  Do not touch them, or you will disturb the wax and the wick. 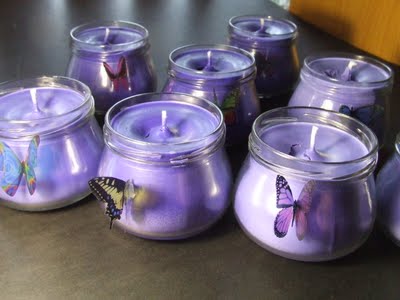 Once solid, I trimmed the wicks.  Note the little dip around the wick.  This is because the wick soaks up some of the wax, but it is not an issue as when you light them, it soon melts and fixes this up. 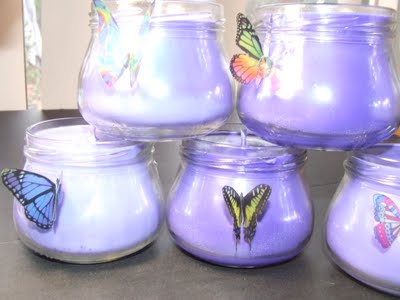 As always, Kim got very artistic and glued a butterfly on each jar.  I think they look very pretty. 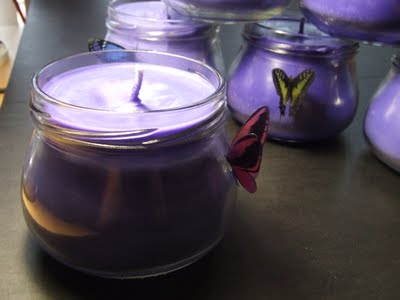 I suppose the question you are all asking is do they work?  Well, categorically, yes they do.  We lit them for a party and they burned down about an 2.5cm (an inch) in 6 hours.  They burn with a nice even fame, with minimal flickering and no smoke or smell.  Quite lovely really.  At least making soy wax candles is natural, unlike paraffin which is made from oil.

Update November 2015: Since I wrote this post Kim now sells the soy wax, candle supplies, and equipment over at Little Green Workshops.  Check out her comprehensive range of soy candle kits as well!

On Thursday evening, Kim and I got stuck into a couple of glasses of red, to loosen us up for the main event which was to make home-made Christmas Crackers.

I had been saving toilet roll tubes for about two months to use as seed planters, but decided to use them for Christmas crackers instead.  Here is how we made them.

I put a little cut in one end of one tube and them inserted it into a second tube.

Then Kim cut some crepe paper to size to wrap around the tubes and then glued them in place.

Then I tied off one end with some fancy shiny stuff, so that one end was still open.

Then I stuffed them with useful things, like lollies, chocolates, pens, fridge magnets, pencil sharpeners, and nail clippers (you can never have enough nail clippers).  Too much plastic wrapping, I know, but we were both sick of the cheap plastic toys that shop bought Christmas crackers are filled with these days.

Once filled, I then tied off the other end, and passed it back to Kim.  She then wrapped some nice ribbon around each cracker and glued it in place.  I then stuck a bow on each one.

Here all of the finished crackers.  It took us about two hours from start to finish.  Don’t they just look pretty!  We didn’t put any bangers inside them, but the contents of each one will be well worth the wait.

We are so looking forward to Christmas Day, as it will be cool here in Melton, with an expected maximum temp of about 23 degrees C.  That means that we can have a roast dinner.  Yummy.  Not too much fuss on the day, as I will prepare the veggies the night before and leave them in water overnight.  All the kids will be here for dinner which we will serve mid afternoon.  This year, it is not about the presents (as we had a limited budget), but all about the good times.  We have a special present that all the family can play.  Not very eco-friendly, but I will do a post about it after the big day.

I intend on doing a few posts over the holidays, but not as frequent as I usually do.  I realise that readers to this blog may be far and few between due to their own busy lives, so I will take that time to enjoy my own hard earned holidays.  Don’t miss me too much, because I will be back, fully recharged, stronger and greener than ever next year!

So, wherever you live on this big blue/green marble we inhabit, have a safe and happy festive season and see you back here soon at TGOG.