Yesterday was a day that I shall remember for a long time.  Ben (10) cooked his first meal.  No, I am not talking about a microwave prepackaged meal, which we don’t eat anyway, but the evening meal for the entire family.  I was very proud of the boy when I arrived home and found out that he had assisted Kim with the cooking of Beef Chow mein, which included the harvesting of the three small cabbages that they used in the meal.  Here is a few photos of the junior chef in action. 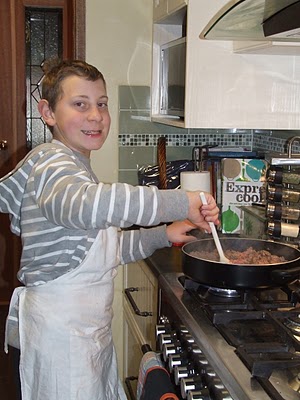 Stiring the meat and the onions, 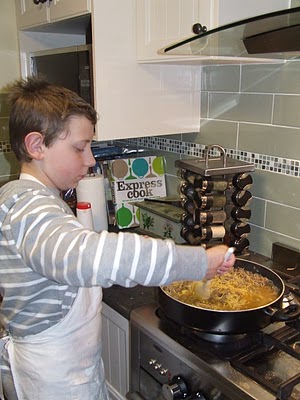 and the cabbage and noodles.
Here is the finished meal. 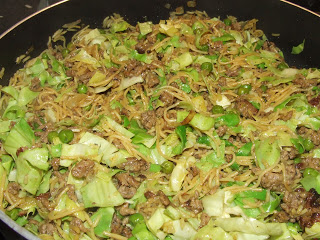 It tasted delicious, with green crunch and a curry flavoured bite!  I savoured every mouthful.  Kim did most of the preparation i.e. defrosting the mince, cutting the cabbage and supevised the event.  But Ben did all the cooking.  A great joint effort and one I praised Ben again for today.

Ben declared to me that he likes cooking, and we promised to let him help all weekend.  He helped put the topping on our home made pizza tonight, and he is very excited (as am I) to be assisting me with cooking a pasta sauce from scratch and adding it to his favourite Tortellini pasta.  The pasta is locally made (North Melbourne), and I source a few ingredients for the sauce from the garden.  I will coax him into doing a little more preparation than he has done in the last two days.

Kim also informed me during our bed chat that Ben helped her with the Chickens, gathered the eggs, put them to bed and put their feeder into the shed.  I feel proud because he really has begun to take an interest in how our food is prepared and grown, and maybe this new found interest will extend into helping maintain the veggie patch.  He already planted seeds about a month ago, so needs to watch, learn and try to plant some of the seedlings into some of the vacant space that the cabbages have left behind.  I have some pumpkins raring to go!  Time will tell, but I am hopeful that he will maintain interest.

Now, those of you who may think that this sudden interest in cooking has stemmed from watching Junior Masterchef TV, think again.  With the Telly still being absent from our lives, we have not watched an episode, so I don’t believe that this has influenced Ben in any way.  It was just the right time to cook!

It has been a very long time since I have enjoyed an afternoon out with the kids. Today, I bit the bullet and decided to take Ben and Amy to our local cinema to see the new Star Wars movie “The Clone Wars“. It took a bit of preparation as I knew that I might not be able to sit down for the entire movie, so I made sure that I had some painkillers on hand to make sure that I didn’t spoil anyones fun.

Ben and I cooked popcorn before we went, and took two water bottles as well. Thank goodness we did because the equivalent at the cinema would have cost us about $15! I drove the Hybrid to the shopping centre which was only a 5 minute drive, but would have taken us about an hour at the pace I walk at this stage in my recovery. We met Amy outside of her workplace, I took the painkillers, and then proceed to the box office. I couldn’t believe the price of the tickets! It has been a long time, over a year in fact!

The movie was pretty good, but it might have been because I started feeling spaced out after about 10 minutes. Ben and Amy enjoyed it, and because I was so zonked out, and didn’t feel the pain as I expected, it was a bit of a trip. Nice colours man! Amy drove home, mainly because I was still out there, a long time ago, in a galaxy far, far away. We told Kim all about the movie, whilst helping finish off the dinner preparation.

It was a wonderful way to spend the afternoon, and we managed to save a fair bit of money by taking our own drinks and snacks. By the looks of things, I think we were the only ones that actually thought ahead. The snack bar was packed and I didn’t realise that people get sucked into buying all of that junk food, when they can walk 200 metres into the shopping centre and get it for a third of the price! Maybe it has to do with the total movie experience, or I am just not willing to fork out my hard earned cash on crap. Frugal to the core.

Even though we are strapped for cash this month, I still managed put some aside to celebrate (or commiserate) the 1st anniversary of my back injury by doing something I wouldn’t have normally done (sit down). The kids enjoyed it as well, and it was a great feeling to do something for them for a change, as they have been doing everything for me during the acute phase of this last relapse whilst I was flat on my back.

Oh, speaking of backs, I forget to mention my visit to my neurosurgeon on Friday. The news was good as far as I was concerned. The MRI showed that there has been no further injury, other than the original disc bulge. Mr Maartens mentioned that a year is still a short time in the scheme of things for this type of injury and there maybe further relapses to come before it fully heals. So now we have finished what I am calling Plan A.

We both agreed to treat it conservatively for another 12 months, if that’s what it takes, (I hope it heals before then), but there is a surgical operation if I really get desperate and if the pain gets worse. Apparently they can fuse the L5/S1 vertebrate from the front to relieve the disc bulge from pressing against the nerve roots that have been giving me the back and leg pain. We called that plan C.

Plan B, which I will begin working towards now, is an exercise rehab program that my work is paying for. It will help me build up my leg muscles and develop core muscle strength. I will be starting the program at the end of August, all being well of course. I am looking forward to it, because I know that this will help speed up my recovery, and get me back to work so I can get stuck into some interesting assignments. I will also be able to do more around the garden, but I certainly won’t be doing any heavy lifting for a very long time, even after the back is fully repaired. I will just have to find a different way of doing things.

Unfortunately, after the smashing success of last weeks home movie Eco Boy, I didn’t get to do much work on The Eco Boy – Episode 2, but at least I have the story board mostly finished. We will have to film it next weekend. Sorry about that for all the die hard fans of the wee lad. Ben took a copy of the episode that I burned onto DVD to show his class as his monthly school project on Friday. All the kids in his class loved it, so I am told, especially the bit where Butch the Wonder Dog makes an appearance and the word Poo. Ben said they all laughed really loud, and his teacher had to rewind it again and again.

I also didn’t do much in the way of gardening this weekend, (still waiting for the seed order to arrive), but I made two wicked curries on Friday night, and a great Minestrone soup in the pressure cooker last night. I used home grown herbs for the soup, and some dried birds eye chillies in the curries. Nice and spicy, and full of flavour. I love cooking with home grown ingredients, but enjoy eating the meal even more!

Not a very green weekend, but certainly a cheap one!

After an exhausting weekend of directing, filming, and mostly editing, here is the first episode of The Eco Boy. I hope you all enjoy it. We had a family viewing last night, and for a first run, everyone was very happy with our collective work.
It has been so much fun making it, and just about everyone participated in its creation. Episode 2 should be out in about a weeks time. Stay tuned!