This is a scary picture.  When I first moved to Melton in August 2000, our local reservoir was full to the brim and water was spilling over the slipway.  Today, this is what it looks like;

It was only a few years ago when in about the 10th year of the Victorian drought, the State government and water companies decided that it was probably best if Melton was connected to Metropolitan Melbourne’s water network.  It took a full year to lay a pipeline from Sydenham to Melton township, and the associated pumping stations to connect the two systems.  We are now in our 13th year of below average rainfall in our district with no end to the drought in sight, but at least we have a water supply that is a little more secure.

I dread to think that if this vital piece of infrastructure was not put in place, the entire town would either be drinking muddy water, or would have started to become a ghost town due to water shortages.  Food for thought, and probably a very good time to think of your own water security if you are in a similar situation.

We do get rainfall here, and certainly enough to fill up my small 2300 litre tank, and if I had the money I would put a gutter on the carport and get a 10,000 litre tank with the option of connecting it to the house hold supply.  A small solar powered pump, a UV sanitizer and filter would be all that would be required to be independent from mains water.  Something to plan for in the very near future!

I suppose all that water in the swimming pool could be desalinated with a simple solar still, so we are probably no as bad off as I first thought.  We have been putting the runoff from the tank into the pool so it is also full to the brim.  I think it holds 50,000 litres, so certainly enough and if necessary easy to convert into a proper water storage facility.  It only needs a big lid to stop evaporation.
When we get that desperate that I have to start desalinating pool water, I think that water security will only one of a long list of issues that we would be up against!  I shouldn’t complain one little bit, because I know that many millions of people have to travel up to 10km per day just to carry back daily water supply of 20 litres the 10km on the return trip to their homes.  We don’t have it bad at all.  I think about this often and I feel selfish having all that water when others have none or little to keep them alive.  It make you realise just how good we have it here in Australia, and that we shouldn’t waste a single drop.

I would love to be writing that my house is open to the public this weekend, 13-14 September 2007, for Sustainable House Day, however, not only did I miss the deadline for nomination, I didn’t even realise such an event existed!

Having checked out the map on the site, there are no houses within 30km of our town that are featured on the day, and none that I could see that have had a retrofit performed on them. From what I can tell by reading as many of the Victorian descriptions I can, is that the majority of homes are purpose built from scratch. So what happens when the majority of people like me want to retrofit an older house? We can’t all build new houses, because that is not very sustainable, is it now!

Our house was built in 1972, and at the time this house was not very sustainable at all. The only sustainable feature is that the living areas have a northern aspect and we can heat the lounge room and study in winter by passive solar heating. The other feature is the massive 50,000 litre water storage facility in the back yard in the form of a swimming pool (call it what you like, I reckon!).

Having performed so much work retrofitting it so that it is as efficient as it can be with the budget we had, it was such a shame that we couldn’t show it. It is a good example of what you can do to an existing home, with a bit of dogged determination and a lot of enthusiasm, and some minor changes in behaviour.

So here is the news flash! Kim and I have decided to enter our house for next years Sustainable House day. We don’t know if we will pass the entry criteria, but are willing to give it a go. At least by delaying for a year, we should have the chook house complete, a second rainwater tank installed and plumbed to the toilets, a lot more land will be under cultivation for food crops, and just maybe my back will be completely healed.

So, if you are around my area, this time next September (2009), have a think about dropping in and saying gidday if my nomination is successful! However, if you are really busting to have a look at what a sustainable house looks like, then have a look at the Sustainable House Day website and have a look for something in your local area. There might just be a house to visit in your town that you didn’t know about, and you might learn a thing or two that you can apply to your own home! 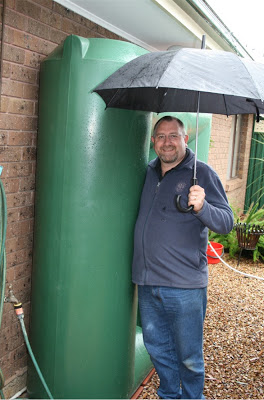