My good friend and Chinese Medicine practitioner, Nelson, sent me through this video to share with all of you. I had a lump in my throat when I watched it.
Once you have viewed it, you will realise why living a sustainable life is one of the most important things we can do for our wonderful blue marble that we call home! Thanks Nelson for the wonderful gift.

I have been procrastinating about writing this story of a long time as something happened to me that changed my life, both physically and mentally. You will understand what I mean by the end of the post.

On Friday the 17th August 2007, the leadership team that I was part of, volunteered to spend the day working at the Collingwood Children’s Farm. The place I work for lets each staff member take one day a year as volunteer leave, so that you can participate in community activities. I believe that this has two purposes, one, to boost staff morale and enhances team-building, and the other enhances the banks standing in the community. From my point of view, it is just plain fun.

I arrived in my Hybrid at about 0830 and met up with Phil (who also has a Honda Civic Hybrid) and we did a quick tour of the chickens and community vegetable gardens on our way to the main building. Some of the vegetables are huge! I have never seen Savoy Cabbages so big. They must have been fertilising them with Giant’s poo or something like that!

We were a bit early, so we had a coffee in the open air cafe. It was a lovely setting. You could hear the goats, chickens and ducks doing their thing. It took me right back to when I was a child growing up on the dairy farm in Loxton North, South Australia. So many memories came flooding back.

The rest of the team arrived at 0900. There was Darren, Samantha, Phil, Kelly, Marcus, Sonja, Sarah, and me. We met the lady who allocates the work and she gave us the briefing for the day. In the morning we were to weed the orchard and in the afternoon feed the animals. We all grabbed the gardening tools necessary for weeding, hoes, wheelbarrows, rakes, buckets etc. (I brought my own well used garden gloves) and headed over to the orchard. We received yet another briefing regarding what weeds to pull out and what to leave alone. Did you know that dock relieves the pain caused by stinging nettles. As Shakespeare would say “To weed, or not to weed, that is the question”.

One botany lesson later, we got stuck into the weeding. We all began to get down on our knees and pulled out at least 20 wheelbarrow loads of weeds. Some of the weeds went to the ducks and chickens as food, some for the goats, and most of them were dumped on the compost heap. I was doing wheelbarrows mostly, but did about 30 minutes of weeding to begin with. We managed to knock it over by about 1130, so we decided to go to the pub for lunch. Marcus led the way as it was in his part of town.

Lunch was nice, however the conversation was sullen. This was because this was the last time we were to be together as a team. Kind of like the last supper, but lunch instead. Unfortunately our department was being broken up and merged with other Technology teams within the bank. No one said anything about it, but I certainly felt a little sad.

We returned to the farm after lunch and met up with the farm lady again. She was impressed that we had finished the orchard so quickly, but soon got us started on feeding the large animals. We loaded up a cart with about 6 bales of hay and proceeded down the shared bicycle track to where the animals lived. I am not sure of the order, but we fed horses, cows, sheep and goats. We had to enter the goat enclosure as the feeder was on the other side of the paddock. A few of us volunteered to carry hay down to the feeder and I decided to grab most of a bale and proceeded to run, as most of the goats were chasing me! Especially this 3 legged nanny goat who had her eyes on the hay I was holding. It was a bit scary but we survived. We moved onto the other animals and threw the hay to some of them. We then went back to the main building where the ladies fed the lambs and a calf with big bottles. They gulped it down in no time flat. We also watched a cow being milked with a very cheeky cat trying to abscond some of the fresh milk. There were about 10 primary school kids at the farm all learning how it worked. I still think that some kids think that milk comes from bottles or cartons, instead of cows!

It was nearly the end of the day, and it was time for the photo shoot. I remember a twinge in my lower back as I sat down to pose, which was the first time we had relaxed all afternoon. I didn’t think much of it at the time. After the happy snaps, we all said our goodbyes and headed home for the weekend. It had been a really educational and fun day. Watch a video of the day’s events here.

As I was driving home, I started to feel intense pain in the area around my lower back. After about 20 minutes the pain began to travel down to my buttocks on both sides and then down to the back of my knees. By the time I arrived home an hour later, I was in excruciating pain and had to take some panadene and lay down. I thought that I had pulled a muscle or something simple like that and that the pain would subside in the morning. But alas, it was not to be that simple.

The pain persisted all weekend and I spent it in bed trying to recover. I found that if I attempted to sit, the pain increased, however if I stood or lay down it abated slightly. On the Monday morning I managed to drag myself down to my GP, Dr Spence, and he quickly diagnosed “Discogenic back pain”. Apparently I managed to get a bulging disc that was pressing on the nerves that travel down the legs. He signed me off work for one week and said it should heal fairly quickly. So six months later, one CT scan, one MRI scan, bi weekly visits to Physiotherapy, many acupuncture sessions and 4 specialist visits later, I have been diagnosed with a L5/S1 disk bulge with tears in the disc lining. It has been slowly healing over the six month period.

I still cannot drive a car for more than 20 minutes without pain, however I have worked part time since the second week of the injury. I now have a standing/sitting electric lift workstation in the office and I travel to the office twice a week. The other three days I telecommute form home, as the travel messes me up a bit. I was travelling to the office by car for a while, but I was in pain when I arrived for most of the day, and when I travelled home again. I couldn’t take pain killers as the makers recommend not operating machinery whilst under the influence of the medication. So I bit the bullet and began to utilise Public Transport. I wish I has thought of this earlier! There is no traffic jams, I can stand comfortably or sit a little while, and I get to the office in a small amount of pain, and all in the same time it took to travel in by car. Not only have I lowered my carbon footprint by not driving, I am less stressed by the trip. 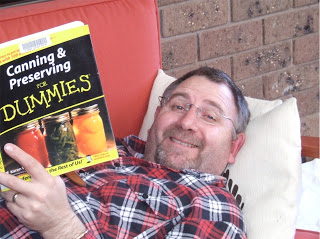 Even though this has been a physical set back in my journey of a sustainable lifestyle, it has not affected me too much mentally. In fact, I have become even more determined to keep my quest alive. The kids and Kim have been helping in the vege patch and all of the heavy work. As I can’t bend too much or lift anything heavy, Adam does all of this for me. That means that things don’t get done on my terms, but I am dealing with that. Kim tells me off if I even look like doing something silly that could hinder my recovery (keep up the good work darling). I must have read about every book in the Melton Library on the subjects of Climate change, Organic gardening, Peak oil, sustainable living, and how to preserve food. I think I have read about 40-50 books in the past six months. All in all, it has kept me sane, and I now see the light at the end of the tunnel. I hope to return to work full time in the next month, as I now not driving, I am recovering faster. 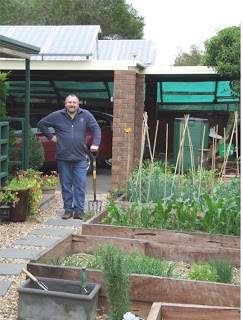 My Chinese Medical practitioner, Nelson, mentioned that maybe my injury happened at this time in my life for a reason. I do believe he is right! Because of my injury, and by spending most of my time at home over the last half a year, I have become very close and in tune with Kim and all the children (even though I am grumpy sometimes when in pain). I have become aware of my surroundings, I live in the moment, treasure the gifts that nature give us all, and have figured out what my purpose is in life. Otherwise I would not have started this blog and begun to share all of my experiences with all of you good people!

Thanks for reading and a special thank you to Kim, my darling wife, Nelson who is a very wise man, and “No Impact Man” aka Colin Beavan, all of who inspired me to pull my finger out and begin writing this blog.