As a result of yesterday’s post about the Strawbridge family, I had quite a few of you ask where they can get the TV series, It’s Not Easy Being Green.  I couldn’t find it for sale on DVD, which is a shame.

However, after a bit of searching I managed to find one episode of season one on YouTube, which will whet your appetite for more.

Here is the episode [http://youtu.be/LEsVbzLNft8]


The rest of the episodes can be found on the interwebs, however I can’t provide you with the link due to copyright laws.  You will just have to find them yourself, sorry.

I reckon that there should be more of this type of programming, and less of those crappy renovation shows on telly (not that I watch them).  It would really get people thinking about how easy it is to live a more sustainable lifestyle.

So what did you think of the show?

Back at the start of our family’s sustainable living journey, Kim and I stumbled across a similar family in the UK called the Strawbridge Family.

Dick, Bridget, James, and Charlotte moved from an English suburban home to Cornwall and bought an 3 acre farm.

They transformed this small farm into a sustainable paradise after lots of work and a fair bit of capital (only because the roof leaked and the insulation was non-existent).

It’s Not Easy Being Green

Here’s the first episode of the first season of It’s Not Easy Being Green.  Dick and James went on to write a book titled “Practical Self Sufficiency“, which I have a copy.  This book really goes into depth about DIY projects with which you can transform your home into a more sustainable one, saving swags of money in the process.

Anyway, the point of this post is that if Kim and I didn’t watch their fantastic TV series called It Ain’t Easy Being Green, we would never have gone half as far down the sustainable living path as we did.  We thought that if they could do it, then we certainly could.

This family’s antics and great projects inspired us to go the extra yard and grow vegetables and rip up our lawns.  It was also by watching this show that Kim finally gave in to getting chickens.

So from the bottom of my heart, and long overdue, I thank the Strawbridge family for helping to inspire us, week after week, and giving us the courage to give it a go in the first few months after my green epiphany (early 2007).  It really kick started our own progress before I started writing this blog.

Good on ya Dick Strawbridge and family.  Thanks a million!

Update:  Back in 2013, one of my readers, James, provided the following update;

I was trying to find out what happened to them the other day and to see what they are doing now, if they’re still running courses etc. It’s quite confusing.

I think Dick and Brigit split up (divorced and Dick remarried) not long after season 3 and she moved back to Malvern (where they started out from) which is when the house was put up for sale.

Brigit now appears to have moved back and is running the place as a B&B having changed its name to Bumblebee Farm.

The new website suggests that they run courses relating to beekeeping and bee management, but hard details are scant. Dick has done a fair bit of television work (Scrapheap Challenge, Beat the Ancestors and a load of “foodie” type programmes), remarried and has a young child.

I’ve no idea if he’s given up working on the “eco-house” idea around his television work or not.

James and his wife still seem to live in the area and run the Posh Pasty Co. He also does some television with Dick. Charlotte appears to be starting out as a professional photographer.

It was sad news when I first read it, but as with everything life goes on. 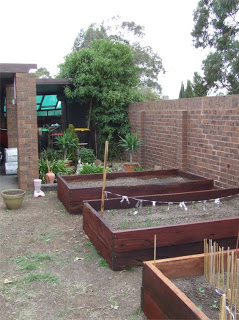 I happened to stumble across a great BBC2 TV show called “It’s Not Easy Being Green”. It is hosted by a retired Lieutenant Colonel, called Dick Strawbridge.

Dick and his family embarked on a quest to live a more sustainable 21st century lifestyle without any major impacts to their existing way of life. He still wanted to be able to have his coffee machine, fridge, washing machine etc, and all the other modern conveniences that make up the western lifestyle. He sold the family home in Worcestershire and moved to derelict farm in Cornwall, with no electricity, heating, water or toilets. Crazy or what!

The first series consisted of seven episodes, which took us on a journey of the family for the first year in their new home. Some of the things they did were;

It was a very inspirational series and both Kim and I enjoyed our weekly dose of the show. After the series finished, I wanted to be just like Dick! He was, and still is my hero.

As we were already started on our own sustainable living journey, and had kicked off our eco house challenge measurements and reduction campaign, we decided to take one of the suggestions from Dick’s show and try them out at home.

I based the design on the “No Dig Garden” developed by Esther Dean. I read her little book, which was full of great information about establishing a garden for Australian conditions. I modified the method slightly as per “Greeniology” and added raised garden beds to make it easier to work on. The soil in Melton is clay based and is very hard when dry. There was very little organic matter in the first 2 cm of topsoil, so I had to improve the soil before I planted and improve drainage.

I decided to use red gum sleepers as the frame for the beds and constructed them 2100 x 1200 x 100 cm and spaced the beds 70 cm apart. This was enough space to lay some pavers for a little path between each bed. The beds were fastened together with 100 mm galvanised nails with a butt joint, and the wood was so hard that I had to pre-drill each nail hole. During the construction I managed to hit my left shin with the full force of a hammer blow! It swelled up like a melon. Nice and sore for the rest of the day, but some ice helped the swelling go down.

As recommended by Esther Dean’s book, I filled the beds in the following order. The first layer was a cover of cardboard and newspaper about 5 sheets thick. This ground cover was to kill the weeks, grass and provide food for the earth worms. Next was a 10 cm layer of either lucerne hay or pea straw. I chose pea straw and Amy and Megan laid it for me. The third layer was a 2 cm layer of Dynamic Lifter (you can use well rotted manure). For the four beds I finished off an entire 25 Kg bag of very smelly Dynamic Lifter. I then covered the DL with another 5 cm layer of pea straw and then a layer 20 cm thick of mushroom compost garden mix. I think it was a 50-50 mix of mushroom compost and a loam type soil. It was filled with organic matter and was very suitable for the purpose of growing vegetables. I ordered 2 cubic metres and used it all! Adam lugged most of it from the roadside and Kim and I raked it level in each bed. Lastly, I topped it off with a 5 cm layer of sugar cane mulch, to help conserve water by stopping evaporation.

It was a very satisfying feeling to finish all of the beds in one weekend. Read on in Part 2, to see how and what I planted in my first Winter crop. 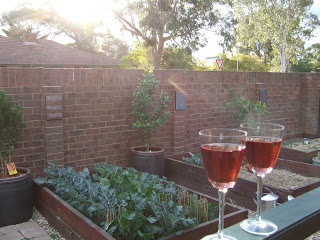